Nicki Minaj‘s brother has been sentenced to 25 years-to-life in a New York prison after he repeatedly raped his 11-year-old stepdaughter while her mother was at work.

Jelani Maraj, 41, was found guilty of ‘predatory sexual assault against a child and endangering the welfare of a child’ in 2017 and on Monday, Nassau County Supreme Court Judge, Robert McDonald, refused to give him a soft sentence.

It was despite his lawyer reading a 2016 letter his famous sister wrote in a bid to reduce his time behind bars, calling him the ‘most patient, gentle, genuine, giving selfless man I know’.

The judge said that his ‘view is that you ruined this child’. 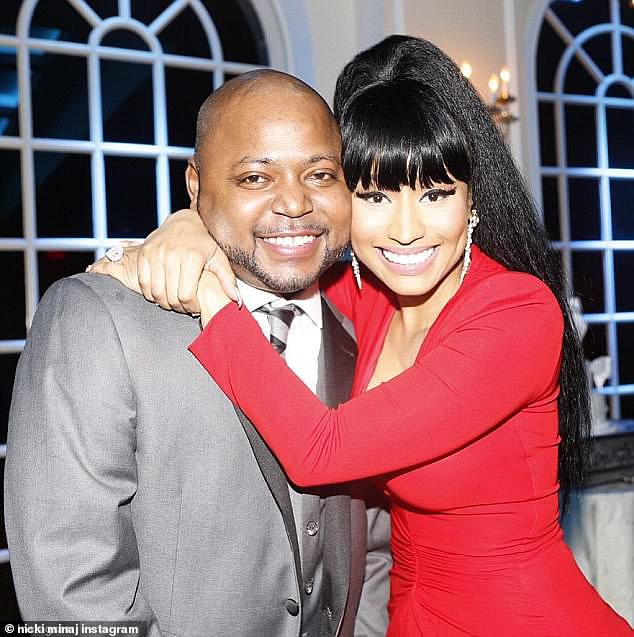 Sentenced: Nicki Minaj’s brother Jelani Maraj was sentenced to 25 years to life in prison on Monday in New York following his 2017 conviction for child rape (Jelani and Nicki pictured) 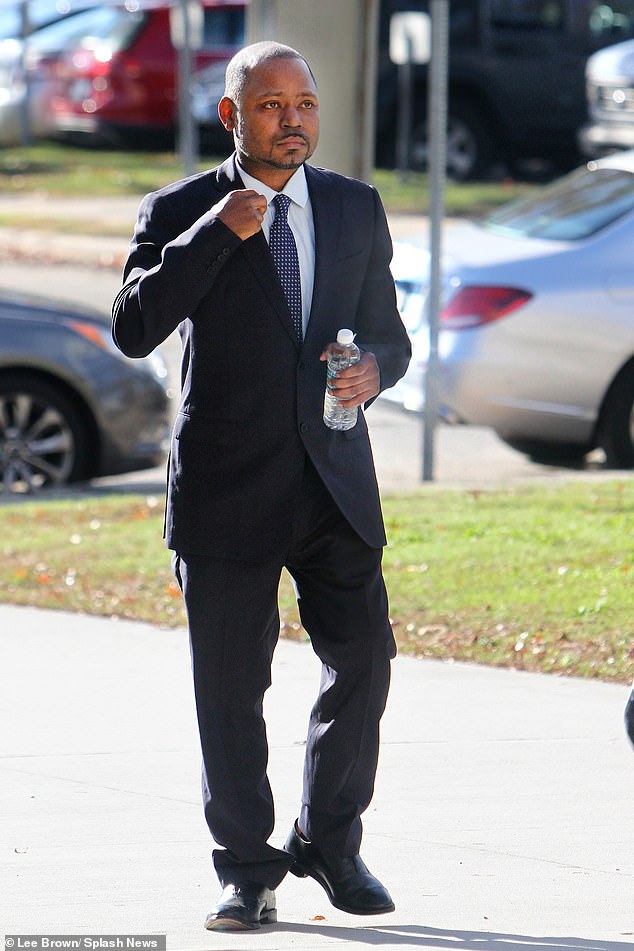 Guilty: He was found guilty of ‘predatory sexual assault against a child and endangering the welfare of a child’ for repeatedly raping his 11-year-old stepdaughter while her mother was at work (Maraj pictured arriving to court for the verdict in 2017)

‘You raped this child. You raped her over and over again,’ the judge added.

Maraj’s long sentence was for sexual assault but he was also sentenced to 364 days for the endangerment of a child.

Maraj had been held in custody, awaiting sentencing, since he was found guilty of the felony following a three-week trial.

The victim, now 14, testified in excruciating detail about sexual assaults that she said occurred as frequently as four times a week and sometimes twice a day.

She told the court she had become suicidal over the abuse.

‘I didn’t think I could make it through the day without an anxiety attack.’ she said. ‘I felt I had no voice,’ the victim, who is now his former stepdaughter, said Monday.

Maraj has maintained innocence and was stoic in the Long Island court room Monday.

Minaj’s brother told the court: ‘I’d like to apologize for the pain that I caused. I had an excessive drinking problem.

His father had an alcohol and drugs problem and burned down the family’s Trinidad and Tobago home in 1987. It prompted Maraj’s mother to move to New York City and Maraj followed when he was 10.

Maraj added that he’s ‘just asking for mercy from the court’. 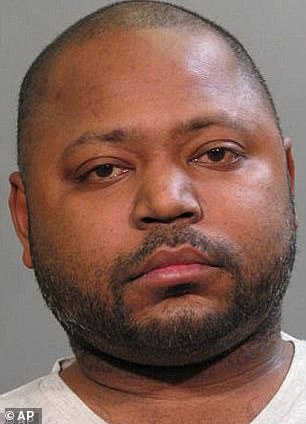 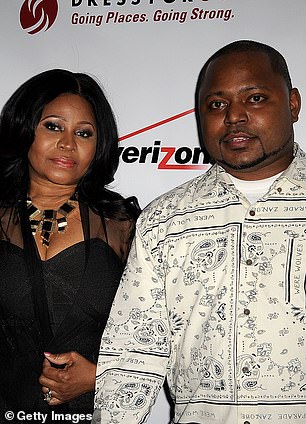 Maraj’s 2015 mug shot, left. The victim testified that the abuse started in April 2015 and continued until that November. The siblings and their mother Carol (pictured right with Maraj) moved to New York when Maraj was 10

His lawyer David Schwartz said he plans to appeal.

‘We will be appealing this excessive sentence,’ he told Pitchfork. ‘There was clear juror misconduct amongst other issues.’

Schwartz did not elaborate on the issues.

Neither Maraj nor his famous sister testified at the trial, even though during opening arguments defense lawyers said that the rapper was on the witness list.

The victim testified that the abuse started in April 2015 and continued until that November.

‘I had went to him to go say “Good morning”. I had hugged him as usual. I went to go lie next to him as I usually do. When I did that, he told me to go close the door,’ she told the court. ‘He told me to take off my pants. Then he told me to come under the covers with him and he started caressing me… We would have sex in his bedroom, in my bedroom, in the basement.’

The girl’s younger brother testified at the trial that he witnessed one assault when he was just eight years old.

Maraj’s threatened to have their mother sent away if they told anyone but the boy reported it to a school administrator.

The prosecutor said DNA evidence recovered from the girl’s pajama pants was linked to Maraj.

An October 2019 attempt to overturn the case was thrown out.

Maraj’s lawyers tried to convince the jury that the rape allegations were concocted by the girl’s mother as part of a scheme to get Nicki Minaj to pay the family $25 million in hush money. 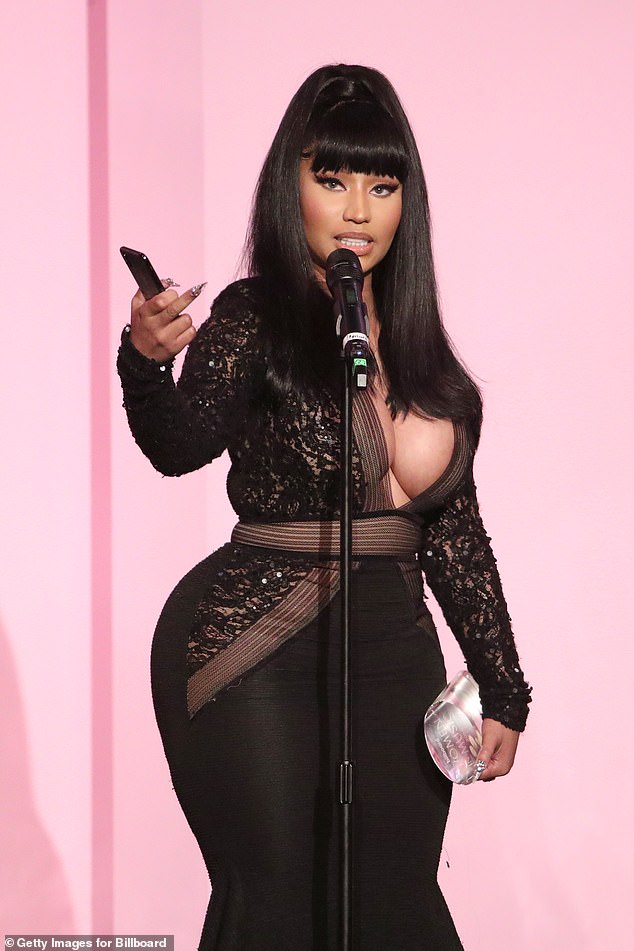 Falling out: Minaj paid her brother’s $100,000 bail back when he was first arrested for the crime in 2015 when the siblings were reportedly quite close, however, sources said the two grew apart following the convictions

The siblings were reportedly quite close prior to the arrest, with Nicki previously plunking down $30,000 to pay for her older brother’s wedding to the mother of his rape victim.

Following this conviction, however, sources said the two grew apart. A week after his conviction, Nicki visited her brother in jail, but reportedly only did so to support their mother Carol, according to TMZ.

While Nicki appeared to distance herself from her brother following the conviction, she ironically married a man who was previously convicted of a similar crime.

In the fall of 2019, the rapper tied the knot with convicted sex offender Kenneth Petty who served time for the 1995 rape of a 16-year-old girl in Queens, New York.

He spent four years in prison in connection with the incident, and was also placed on the sex offender registry.

Kenneth also has a first-degree manslaughter conviction in 2006 in the fatal 2002 shooting of a man. He served seven years of a 10-year sentence and was released from custody in 2013.