Eyewitness video captured the sound of gunfire as police responded at the scene of a deadly church attack in the French city of Nice on Thursday. A man armed with a knife has killed three people – two women and a man – during the terrorist attack inside the Notre-Dame Basilica in the city centre. Police described the scene as a ‘vision of horror’. The mayor of Nice, Christian Estrosi, said the attacker had said ‘Allahu Akbar’ several times while he was being arrested and handcuffed by police 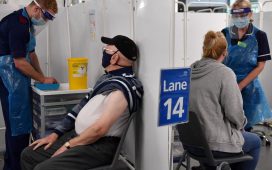 ‘Help us or LSO fails’: Sir Simon Rattle’s plea over Covid and Brexit