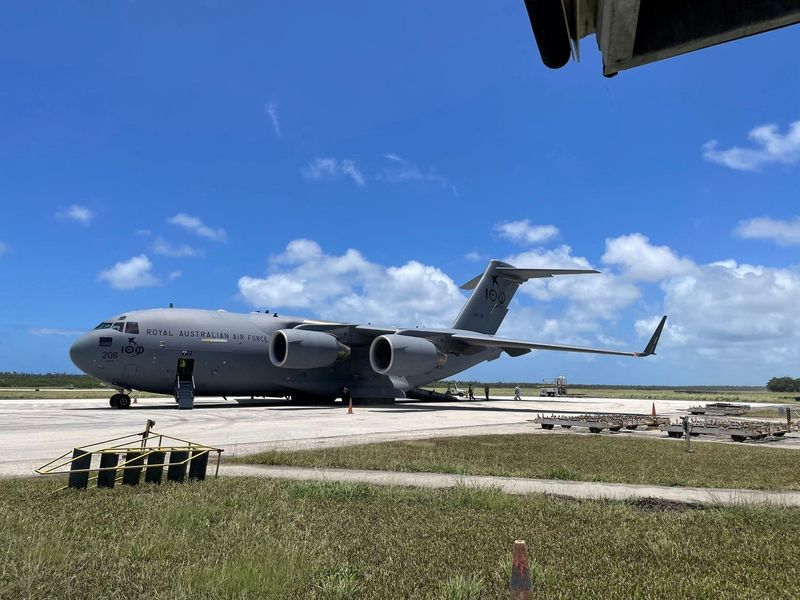 WELLINGTON/SYDNEY (Reuters) -A New Zealand navy ship carrying 250,000 litres of water arrived in Tonga on Friday, bringing life-saving supplies for the South Pacific archipelago six days after it was devastated by a volcanic eruption and tsunami that polluted its water sources.

As help from abroad started arriving, an Australian aid flight was forced to return to base because of a positive COVID-19 case onboard, underlining the complexity of a contactless humanitarian mission to one of the few countries that has kept the coronavirus at bay.

New Zealand’s High Commission said that the HMNZS Aotearoa had arrived in the capital, Nuku’alofa. As well water supplies it was carrying desalination equipment that can produce 70,000 litres a day.

The Hunga Tonga-Hunga Ha’apai volcano https://tmsnrt.rs/3qCTwKY eruption last Saturday triggered a tsunami that destroyed villages and resorts and knocked out communications for the nation of about 105,000 people, and sent shockwaves across the Pacific.

The salt water from the tsunami and the falling ash spoiled most sources of water on the islands and Tongans have been struggling to find clean water as they clear away the ash.

“We are cleaning the ash and have been since Monday,” said Branko Sugar, 61, who runs a bottle shop and fishing charter business from Nuku’alofa.

“Everything is so dusty, and we are running out of water,” he said over a patchy telephone line.

“We only have the tap water, and it’s been contaminated. We… can hardly breathe for all the dust.”

The first aid flights from Australia and New Zealand landed in Tonga on Thursday with some water for sanitation and hygiene as well as shelter, communication equipment and generators.

Australia’s HMAS Adelaide is en route from Brisbane and is due in Tonga next week.

NASA’s Goddard Space Flight Center has said the force of the last Saturday’s eruption was estimated to be equivalent to five to 10 megatons of TNT, or more than 500 times that of the nuclear bomb the United States dropped on the Japanese city of Hiroshima at the end of World War Two.

Astronaut Kayla Barron said she could see the volcanic ash in the atmosphere from the International Space Station.

“I opened the window shutter to see if we could see any effects of the eruption, and saw this dramatic, high-altitude plume blocking out the sun,” Barron said on Facebook.

“We remain seriously concerned about access to safe water for 50,000 people … Water quality testing continues, and most people are relying on bottled water,” he said, speaking before the Aotearoa arrived.

Some 60,000 Tongans have been affected by damage to crops, livestock, and fisheries due to ashfall, saltwater intrusion and the potential for acid rain, Dujarric said.

There are also reports of fuel shortages, he added.

Telephone links between Tonga and the outside world were reconnected late on Wednesday, although restoring full internet services https://tmsnrt.rs/3qzVPyy is likely to take a month or more.

Tongans have turned to social media to post images of the destruction by the tsunami and give accounts https://www.reuters.com/world/asia-pacific/tongans-deafened-by-volcanic-blast-they-fled-safety-2022-01-20 of their shock after the massive explosion.

Tesla Chief Executive Officer Elon Musk asked in a post on Twitter (NYSE:) if Tongans would like help from his Starlink project, which provides internet connection through satellites.