Not every new animal is discovered in the jungle or rainforest: A new species of snake was discovered in a museum after being ignored by researchers for years.

Levitonius mirus, also known as the Waray dwarf burrowing snake, is native to the Philippines.

But specimens of the snake sent to the University of Kentucky were misidentified  until a research assistant conducted analysis of their scales and skeletal structure.

He determined it wasn’t just a new species, but an entirely new genus.

At 6.7 inches, the Waray dwarf is also one of the smallest snakes of its kind and has among the fewest number of vertebrae of any species. 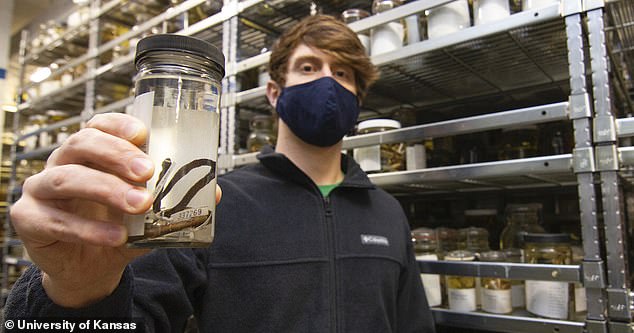 Jeff Weinell, a researcher at the University of Kansas’s Biodiversity Institute and Natural History Museum, was the one to realize snakes identified as Pseudorabdion were actually an entirely new species and genus

There are at least 112 species of land snakes in the Philippines, spread across 14 genera.

Between 2006 and 2007, three specimens were collected from the islands of Samar and Leyte and sent to the University of Kansas’s Biodiversity Institute and Natural History Museum.

There, they were added to the institution’s collection of preserved snakes but not identified as a new species—not even after more specimens were found in 2014.

That didn’t happen until research assistant Jeff Weinell began his doctorate work at the university and started analyzing the institute’s collection.

Levitonius mirus, or the Waray dwarf burrowing snake, is a ‘miniaturized genus,’ reaching a maximum length of 6.7 inches 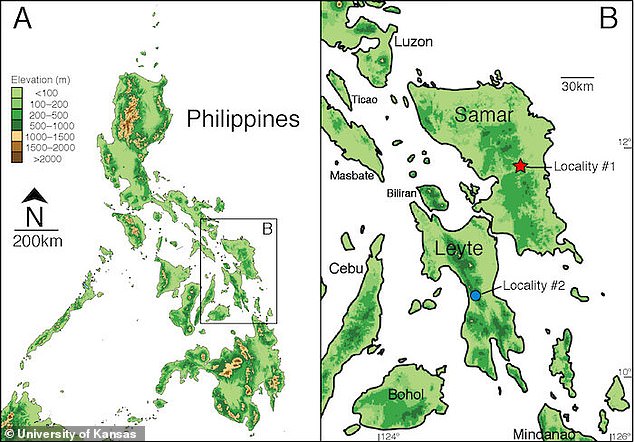 The three specimens were collected from the islands of Samar and Leyte in the south Philippines. The country is home to at least 112 species of snakes in at least 14 genera

The specimens had been labeled as Pseudorabdion, an entirely different genus of native burrowing snakes.

But after he sequenced the DNA for the tissue samples the institute had, Weinell realized they weren’t Pseudorabdion at all.

To unravel the mystery, he and curator Rafe Brown examined their scales and had CT scans performed on one specimen’s internal anatomy.

They determined they weren’t just a new species, but an entirely new genus, as well.

‘The trained ‘expert field biologists’ misidentified specimens—and we did so repeatedly, over years—failing to recognize the significance of our finds, which were preserved and assumed to be somewhat unremarkable, nondescript juveniles of common snakes,’ said Brown, who co-authored the report on Levitonius mirus, published in the journal Copeia.

The snake is named after the Waray people, who live on Samar and Leyte.

Its scientific name, Levitonius mirus, is in honor of herpetologist Alan Leviton — who’s spent decades researching snakes from the Philippines — and ‘mirus,’ the Latin word for ‘unexpected.’

The snake has among the fewest number of vertebrae of any snake species, like the result of its size and spending most of its life underground

‘That’s referencing the unexpected nature of this discovery,’ Weinell said, ‘getting the DNA sequences back and then wondering what was going on.’

Levitonius is designated a ‘miniaturized genus’ of snake—reaching a maximum length of 6.7 inches

‘The size of a pencil,’ Weinell told CNN, ‘the closest relatives could be three to four times larger.’

In its native habitat, it spends most of its time beneath the surface, only surfacing after heavy rains.

In its native habitat, Levitonius mirus spends most of its time underground and only surfaces after heavy rains

It has among the fewest number of vertebrae of any snake species, according to Weinell, likely the result of miniaturization and an adaptation for spending most of its life underground.

The discovery reminds scientists there is still much to learn about reptile biodiversity in the region, said biologist Marites Bonachita-Sanguila of the Biodiversity Informatics and Research Center at Father Saturnino Urios University in Butuan City.

‘All this time, we were literally walking on top of them as we surveyed the forests of Samar and Leyte,’ she added. ‘Next time, bring a shovel.’

This is at least the second species of burrowing snake from southeast Asia identified this month.

A snake found in the karst forests of Vietnam was recently named Achalinus zugorum, in honor of the Smithsonian’s retired curator of reptiles and amphibians, George Zug.

The rare reptile has a blackish and dark purple dorsum, along with a dark brown underside and strong iridescence coloration throughout its entire body.

Unlike most snakes, Achalinus zugorum’s skin is exposed between the small scales that line its body.