New Manhattan themed Scots restaurant 63rd and 1st has a special ‘Billionaire Row’ drinks menu for high rollers who want to live it up.

The flagship UK restaurant in Glasgow’s Bothwell Street is the first to come to the UK, and it is being opened by the company behind TGI Fridays.

The eatery showcased some of its delicious dishes and swanky decor at a party on Thursday night.

63rd and 1st is itself named after the New York street where TGI Fridays first started in 1969.

For the launch Rangers Women’s Team and Scotland National Team player Jane Ross and Dutch player Tessel Middag were among those invited to the bash, alongside Clyde 1’s DJ Cassie and lots of Scottish Instagrammers.

And those who looked closely could find, within the standard priced colourful cocktails, drinks and wine menu – a special Billionaire’s Row menu.

The extra exclusive black, white and gold menu included a list of some of the more expensive wines available for those who might live in the upper echelons of Manhattan, including a bottle of Opus One 2010 red for £490.

It’s described as being ‘from one of the most exclusive wineries on the planet. Velvety tannins, smooth as silk, packed full of blackcurrants and sweet spice’.

For those who like a white wine there’s also a Crton-Charlemagne Grand Cru Domaine Bonneau Du Martray 2011 described as ‘Chardonnay at its absolute best. Rich powerful and perfectly balanced with concentrated baked apple and honey notes’.

If you don’t fancy splashing out on that you can always opt for something else a bit more unusual like the FUHGEDDABOUDIT cocktail at £9.50 with Stolichnaya Premium vodka, Tanqueray LondonDry gin, Havana 3 Year Old rum, Cointreau, and Coca-Cola Zero Sugar. 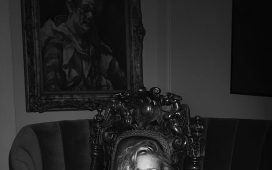