Audi looks set to amp up its electric car family with a high performance version of the e-tron SUV. The new model will likely wear the S badge; with the Audi e-tron S taking its place in the brand’s range of hot SUVs between the SQ5 and SQ7.

The spy shots, snapped while the new model was testing on and around the Nurburgring, shows the all-electric SUV riding on a more purposeful set of alloy wheels and sitting slightly lower to the ground – an easy thing to achieve, as the e-tron runs on air suspension as standard.

Though the lower section of the car’s bodywork is covered in camouflage, the changes to the overall design aren’t likely to be radical. Falling in line with the other S-badged Audis, the minor detail changes should include contrasting silver door mirrors, red brake calipers and small revisions to the bumper and grille designs.

We haven’t got close enough to the interior yet to see any detail, but the upgrades are likely to be similarly subtle. Expect sports seats trimmed in quilted leather, a flat-bottomed sports steering wheel and small flashes of carbon fibre trim.

To boost performance over the regular e-tron’s 402bhp twin-motor (one front, one rear) set-up, the S is likely to gain a second rear-mounted motor to up the output to around 500bhp. The current model can sprint from 0-62mph in 5.7 seconds, so the extra shove should drop this closer to five – roughly the same as the SQ5.

The extra speed could see the range drop relative to the standard e-tron, though. The 95kWh battery gives a WLTP-certified range of 248 miles, and a slight reduction in that figure should see the e-tron S achieve a similar range to the Tesla Model X Standard Range. However, the Model X manages those figures with a smaller battery.

A release date is yet to be confirmed, but with Audi announcing that it will release five new EVs in 2020, it’s likely that the e-tron S will make its debut next year. 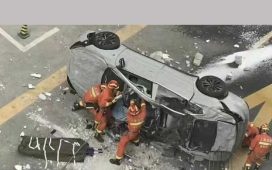