NEWSCABAL
Home » Never Have I Ever, the show that saw us through lockdown 1.0, is back for a second season SO soon! Here's what you need to know
fashion

Never Have I Ever, the show that saw us through lockdown 1.0, is back for a second season SO soon! Here's what you need to know 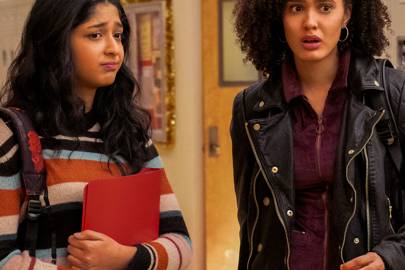 Spoiler alerts for Never Have I Ever season 1…

We’ve been waiting patiently and at last, Never Have I Ever season two is finally back… or at least it will be next month!

The show, which premiered on Netflix last year with its 10-episode debut season, is narrated by tennis legend, John McEnroe. It is created by Lang Fisher and Mindy Kaling and follows teen protagonist Devi Vishwakumar (Maitreyi Ramakrishnan), a first-generation Indian American girl who is desperate to be the cool girl in high school and losing her virginity to her crush, also known to her as the hottest man alive, Paxton Hall-Yoshida (Darren Barnet).

However, as we all saw, things didn’t exactly go to plan for Devi, who managed to ruffle a lot of feathers with her two best friends Fabiola and Eleanor and her family, in the pursuit of the new life she was so fixated on.

The best comedies on Netflix to cheer you up in lockdown (including Mean Girls – finally!)

So, what can we expect from season two?

The show was a huge hit during the first lockdown last year, with many of us binge-watching the entire first season within a weekend and Twitter going off with memes and commentary, as it does. Naturally, we have no doubt the same will happen when the new season is released.

Here’s everything we know so far…

What will Never Have I Ever season 2 be about?

As we can see from the trailer, Devi has a big decision to make in season 2. Should she date Paxton or Ben? Or BOTH? As she says, this is her last chance to have an American high school boyfriend before her family move to India – a bomb her mum dropped on her at the end of season one. While she decides, she gets some competition from a new Indian girl who starts at Sherman Oaks High. Season two will also likely see Devi confront her grief about the death of her father – a lingering part of the first season, where we saw her struggle to accept her grief and instead distracting her with all the drama should could possibly get into.

“I would love to see Devi love herself,” actress Maitreyi told Deadline last year about what she hopes to see from her alter ego. “I think that’s an important message that not just high school teenage girls could learn. Just the idea of loving yourself is something I think a lot of people need to hear. I don’t think we do that enough. I don’t think we value ourselves as much as we should.”

She continued: “People tend to take care of other people, but they tend to neglect their own emotions, their own well-being, their own mental health. Devi’s a prime example of that. She only just started at the end of the series to confront her grief for her father. We can’t go to season 2 and pretend Devi’s all better now. That doesn’t make sense. That’s not how it works.”

Sex Education season 3: We FINALLY have our first look at the new series, and a release date!

Who will be in the cast of Never Have I Ever season 2?

The main cast from the first season will all reprise their roles for season two of Never Have I Ever including Maitreyi Ramakrishnan, Jaren Lewison, Darren Barnett, Lee Rodriguez, Ramona Young and Poorna Jagannathan. However, there are also some new additions according to Deadline. This includes Megan Suri, who will make her debut as new girl Aneesa. Meanwhile Devi’s mum Nalini will be getting herself a new love interest in the form of the incredibly attractive rapper/actor, Common, who will be playing Dr. Chris Jackson, a rival dermatologist.

When is the release date for Never Have I Ever season 2?

You’ll be just as pleased as we are to hear that Never Have I Ever season 2 will be dropping on Netflix on 15 July. Yep, that’s just weeks away!

We know what we’re doing that weekend.

Is there are trailer?

There is indeed. Netflix dropped the new trailer for season 2 on 18 June, and it looks epic.