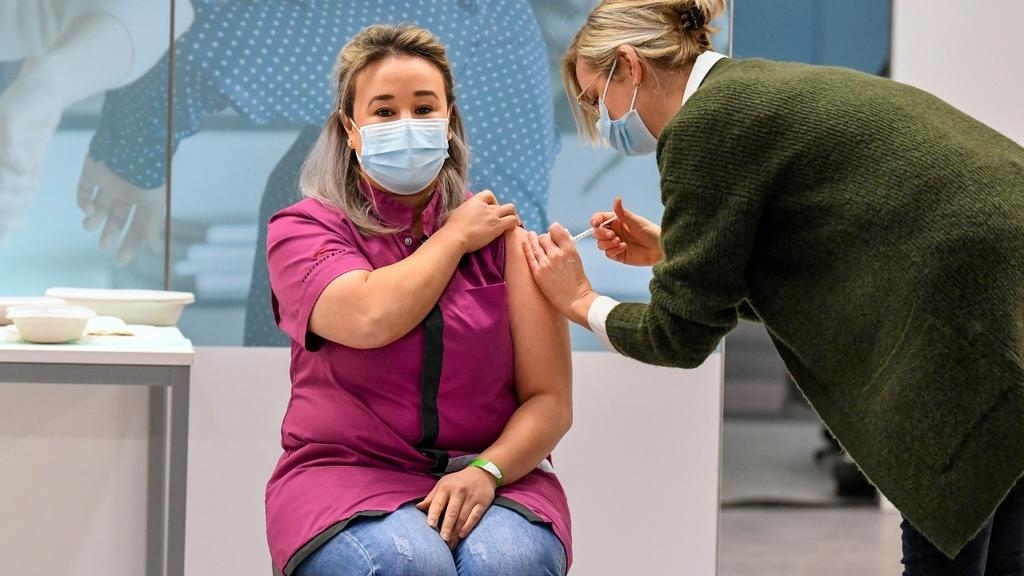 Nearly two weeks after most other European Union nations, the Netherlands on Wednesday began its Covid-19 vaccination program, with nursing home staff and frontline workers in hospitals first in line for the shot.

Sanna Elkadiri, a nurse at a nursing home for people with dementia, was the first to receive a shot of the Pfizer-BioNTech vaccine at a mass vaccination center in Veghel, 120 km (75 miles) southeast of Amsterdam.

The Dutch government has come under fierce criticism for its late start to vaccinations. Prime Minister Mark Rutte told lawmakers in a debate Tuesday that authorities had focused preparations on the easy-to-handle vaccine made by Oxford University and AstraZeneca, which has not yet been cleared for use in the EU, and not the Pfizer-BioNTech vaccine.

Dutch Health Minister Hugo de Jonge did not comment on the criticism as he spoke before Elkadiri rolled up the left sleeve of her purple nurse’s uniform to receive the first shot. Instead, he looked forward to a future with the virus under control.

“Finally, after 10 months of crisis, today we are starting to end this crisis,” De Jonge said. But he warned that, “it will take a while before we have all the misery behind us. ”

The Pfizer-BioNTech vaccine, which requires ultra-cold storage before it is used, is the only shot that has been approved so far by the EU’s medicines agency. The European Medicines Agency on Wednesday was considering approving another coronavirus vaccine, one made by Moderna.

“I’m very disappointed that we are two weeks behind other countries,” Rutte said in the Dutch parliament.

Nearly 12,000 people are confirmed to have died of Covid-19 in the Netherlands since the pandemic started, though the true number is higher because not all people who died with symptoms were tested.

Andre Rouvoet, chairman of the umbrella organisation of local health authorities, welcomed the first vaccinations, which were aired live on Dutch television.

“It is symbolic of the hundreds of thousands — millions — of vaccinations that will be administered in the Netherlands in coming months,” he said.

Worldwide, the Covid-19 crisis has shown no signs of slowing, with known infections nearing 86 million and more than 1.8 million deaths, even as many nations ramp up their vaccination rollouts.

England began its third national lockdown Tuesday as alarm grew in Britain over the latest surge in cases which is threatening to overwhelm its National Health Service, piling on the misery for people growing tired of social distancing and the economic cost.

“It’s just exasperating, because I don’t know if people can just go that extra mile another six weeks with this lockdown. It’s just crazy,” said Alex, a 65-year-old retiree and one of the few people out on the streets of London on Tuesday.

A senior government minister has warned the lockdown could last into March.

READ  Former Polish FM on US elections and the EU: 'It would be much easier to work with Biden'

Denmark and Germany also extended and increased coronavirus measures on Tuesday, as concerns grew about the surge on the continent and the European Union falling behind other advanced nations in its vaccination drive.

There are hopes the bloc’s medical regulator will authorise the Moderna vaccine when it reconvenes on Wednesday. It had approved the Pfizer-BioNTech shot last month.

Limited supplies are a major hurdle for nations trying to accelerate their rollouts.

Britain and Denmark have said they will wait for longer than the recommended 21-28 days between jabs so they can focus on giving more people their first dose — a move that has divided experts.

But World Health Organization experts on Tuesday gave cautious backing “in exceptional circumstances” to delaying the second doses of the Pfizer-BioNTech vaccine.

Meanwhile, an expert mission to China to find the origins of the pandemic stumbled before it even began, with the head of the WHO complaining that Beijing was blocking the team from entering the country.

WHO chief Tedros Adhanom Ghebreyesus said he was “very disappointed” with the last-minute bar on entry, in a rare castigation of Beijing from the UN body.

Spurred on by new variants that are believed to be more contagious, the virus situation in some countries is as bad as it has ever been.

The United States broke its own record for the number of daily deaths from Covid-19 yet again Tuesday, recording 3,936 fatalities in 24 hours, according to a tally kept by Johns Hopkins University.

In California, the new US epicentre, Los Angeles ambulance workers have been told to stop transporting some patients with extremely low survival chances to hospitals, and to limit oxygen use, as medical resources are overwhelmed.

The world’s worst-hit nation is ultimately counting on its vaccination campaign, which began mid-December, to end the crisis.

But less than two percent of the population has so far been covered, with 4.8 million people having received the first of two doses.

Israel is out front with vaccinations, having covered some 13.5 percent.

But it came under fire from Amnesty International on Wednesday for failing to provide coronavirus vaccine doses to Palestinians in the occupied West Bank and Gaza.

The spikes in caseloads around the world have disrupted the few entertainment and sports events that had managed to resume after shutdowns earlier in the pandemic.

The English Premier League, one of the world’s most-watched football competitions, said a record 40 players and staff have tested positive in the last two rounds of testing, but insisted the football season will continue.

And spectators at Australia’s showpiece Boxing Day cricket Test against India in Melbourne were warned they must get tested and isolate after a fan at the stadium tested positive.

The Grammy music awards, slated for January 31 in Los Angeles, were also postponed until March over the Covid-19 situation in California.