NASA‘s Ingenuity helicopter has successfully completed a 14th flight on Mars — its first since a two-week blackout caused by the Red Planet’s position in space.

The US space agency was forced to pause most of its robotic Mars missions for safety reasons when the planet moved behind the sun from Earth’s perspective earlier this month.

Engineers were worried the solar conjunction might lead to ‘unexpected behaviour’ from its spacecraft if they tried to communicate with them, so instead paused the missions and gave each one ‘homework’ to do.

But it appears Ingenuity suffered no ill effects from the phenomenon, which happens every two years, as it flew a ‘short hop’ on Monday to assess summer weather conditions at its location on the Red Planet.

As weather at Jezero Crater gets warmer, the helicopter’s rotors must turn faster to achieve flight, so engineers wanted to test its performance at higher rpm settings.

NASA’s JPL team tweeted: ‘The #MarsHelicopter successfully performed a short hop in its current airfield to test out higher rpm settings so it can fly in lower atmospheric densities on the Red Planet.

‘This test also leaves the team room for an rpm increase if needed for future flights.’

NASA has not revealed details of how far or for how long the helicopter flew for, or what time the flight took place. 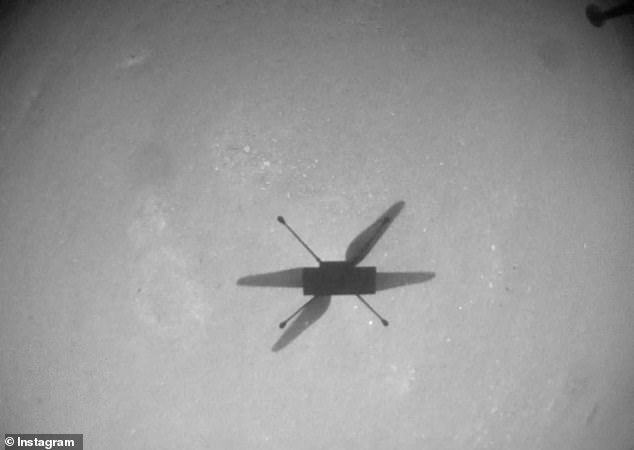 Photo of NASA ‘s Ingenuity helicopter taken during its tenth flight. NASA said it was the ‘most complex’ flight yet 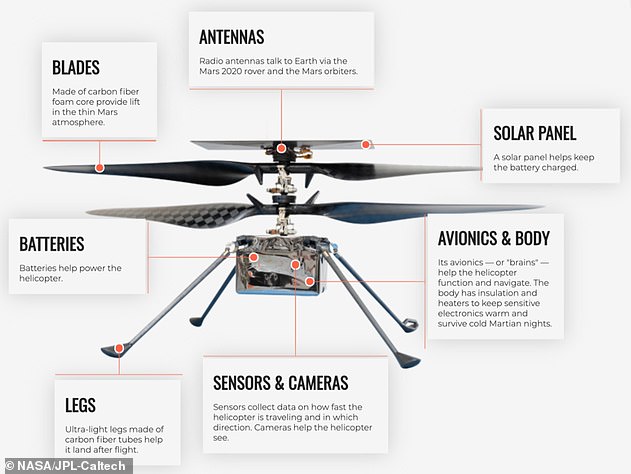 Diagram showing the different components of Ingenuity. The Ingenuity Mars Helicopter was built by JPL, which also manages the technology demonstration for NASA Headquarters

Flight nine: July 5, 2021 with a record length of 2,050ft southwest over a prospective research location at 16ft per second.

Flight eleven: August 5, 2021 by flying 1,250ft for 130 seconds in preparation for a series of reconnaissance missions for the Perseverance rover.

Flight Thirteen: September 5, 2021 by flying 690ft for 160.5 seconds, climbing 26ft over one particular ridgeline over the ‘South Seitah’ region of Mars.

The US space agency originally designed the helicopter to fly five times on Mars but it has already completed 14 missions.

It is currently acting as a scout for the Perseverance rover, which is searching for ancient microbial life on the Red Planet.

Ingenuity was previously forced to abort its attempt at a 14th flight last month, prior to the blackout, when data indicated a problem with mechanisms that help control direction and position of the rotors.

This was not an issue ahead of its current test but engineers are concerned that the helicopter’s parts could be weakening because of its extended mission and the stress of extreme temperatures on Mars.

The rovers Perseverance and Curiosity, as well as the lander InSight, also lost connection with Earth from October 2.

During solar conjunction — when Earth and Mars can’t ‘see’ each other — the sun expels hot, ionized gas from its hot outer atmosphere, or corona, and this gas can interfere with radio signals if engineers try to communicate with spacecraft on the Red Planet.

Perseverance was stationed 575ft (175m) away from Ingenuity during the blackout.

The rover took weather measurements, looked for dust devils with its cameras, and captured new sounds with its microphones as part of its ‘homework’.

Perseverance is currently heading south from its landing spot on the Jezero Crater, while Ingenuity is scouting locations to help it plot its way on the ground.

Ingenuity arrived on Mars attached to the belly of Perseverance, which touched down on Mars on February 18 after a nearly seven-month journey through space.

Perseverance made its first test drive on Mars on March 4, and on April 4, NASA confirmed that Ingenuity had been dropped to the surface of Mars from Perseverance’s ‘belly’ in preparation for its historic flight.

NASA also said on April 5 that Ingenuity had survived its first night on the Martian surface – a major milestone because surface temperatures can plunge as low as -130°F (-90°C).

The helicopter, which is just 18-inches tall, made its first flight on April 19, 2021, making history as the first powered controlled flight on any planet other than Earth.

In a nod to this feat, Ingenuity carries a small amount of fabric that covered one of the wings of the Wright brothers’ aircraft, known as the Flyer, during the first powered, controlled flight on Earth in 1903.

For the first flight, Ingenuity took off, climbed to about 10 feet (3 meters) above the ground, hovered in the air briefly, completed a turn and then landed.

After that, the helicopter successfully performed additional experimental flights of incrementally farther distance and greater altitude, culminating with the tenth flight on July 24.

The first five flights throughout April and May were part of a ‘technical demonstration’ to prove something could fly on Mars. 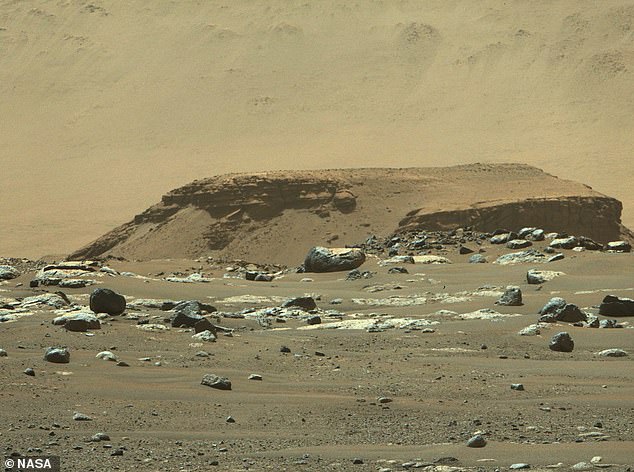