A small gas exoplanet may have lost its atmosphere billions of years ago, but then gained a second one through volcanic activity, according to astronomers.

The planet, GJ 1132 b, is thought to have begun as a gaseous world, similar to Jupiter or Saturn but smaller than Neptune, with a thick hydrogen blanket of atmosphere.

It quickly lost its primordial hydrogen and helium atmosphere, having it ‘cooked off’ within the first 100 million years of the planet forming due to the intense radiation of its hot, intense host star – which it orbits once every 1.6 days.

This left it a ‘bare core’, similar in size to the Earth, but with no atmosphere – but astronomers say it developed a second atmosphere due to volcanic activity on the surface of the now rocky world at some point in the billions of years that followed.

The team, from NASA and the University of Cambridge used Hubble and computer modelling to explore how the atmosphere was first lost and then regained. 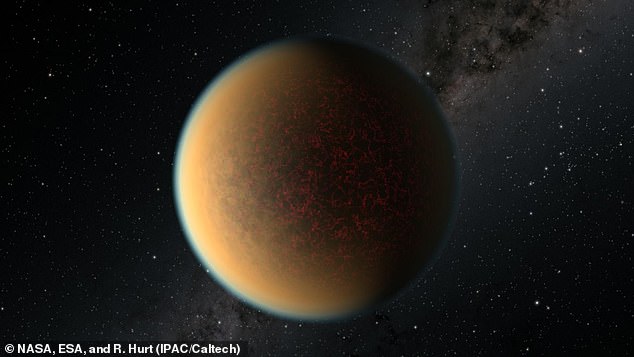 This is an artist’s impression of the Earth-sized, rocky exoplanet GJ 1132 b, located 41 light-years away around a red dwarf star 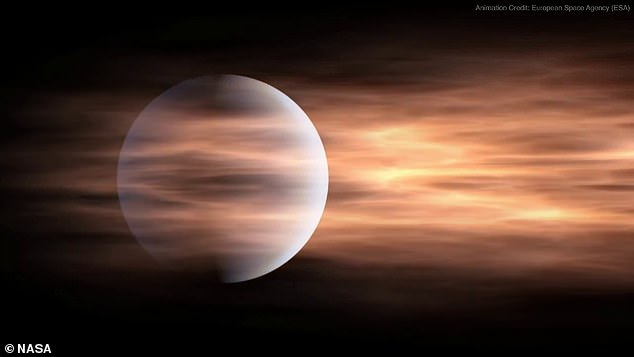 It quickly lost its primordial hydrogen and helium atmosphere, having it ‘cooked off’ within the first 100 million years of the planet forming due to the intense radiation of its hot, intense host star – which it orbits once every 1.6 days

EXOPLANET GJ 1132b: THE CLOSEST WORLD TO A RED DWARF STAR

Recent observations of the planet, first discovered in 2015, revealed more details about its atmosphere including the fact it has a hydrocarbon haze, similar to what can be seen on Earth after a smog.

Astronomers believe this is a ‘secondary atmosphere,’ in part due to the inclusion of chemical ‘fingerprints’ in the observations showing elements of primordial hydrogen and helium.

The team reports that the atmosphere consists of molecular hydrogen, hydrogen cyanide, methane and also contains an aerosol haze.

Modeling suggests the aerosol haze is based on photochemically produced hydrocarbons, similar to smog on Earth, and likely the result of volcanic activity.

Hydrogen from the original atmosphere was absorbed into the planet’s molten magma mantle billions of years ago – within the first 100 million years of it forming – and is now being slowly released by volcanism to form a new atmosphere.

This second atmosphere, which continues to leak away into space, is continually being replenished from the reservoir of hydrogen in the mantle’s magma.

‘This second atmosphere comes from the surface and interior of the planet, and so it is a window onto the geology of another world,’ explained team member Paul Rimmer of the University of Cambridge. 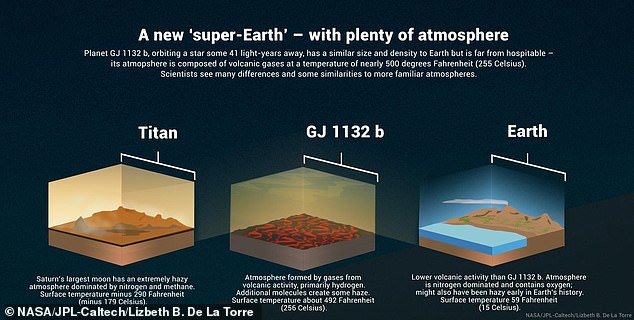 The rocky exoplanet GJ 1132 b, similar in size and density to Earth, possesses a hazy atmosphere made up of volcanic gases 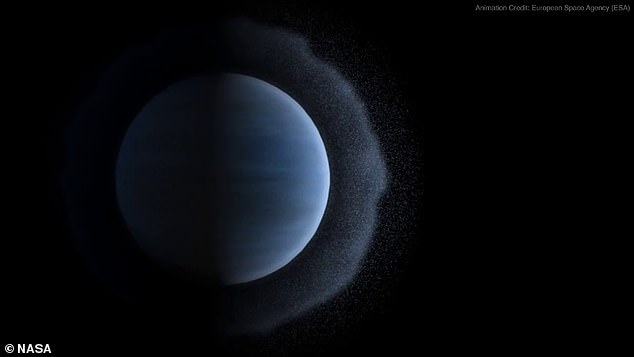 Recent observations of the planet, first discovered in 2015, revealed more details about its atmosphere including the fact it has a hydrocarbon haze, similar to what can be seen on Earth after a smog

‘A lot more work needs to be done to properly look through it, but the discovery of this window is of great importance.’

As the second atmosphere comes up from the surface of the planet it provides astronomers with a ‘window into the geology of another world,’ said Rimmer.

‘We first thought that these highly radiated planets would be pretty boring because we believed that they lost their atmospheres,’ said team member Raissa Estrela of the Jet Propulsion Laboratory at the California Institute of Technology.

The discovery led the team to question how many terrestrial planets don’t begin life as rocky worlds, but rather cores of gas planets – like this one.

Then they ‘become terrestrials through a mechanism whereby light evaporates the primordial atmosphere,’ said team leader Mark Swain of JPL.

‘This process works early in a planet’s life, when the star is hotter. Then the star cools down and the planet’s just sitting there.

‘So you’ve got this mechanism that can cook off the atmosphere in the first 100 million years, and then things settle down. And if you can regenerate the atmosphere, maybe you can keep it.’

In some ways, GJ 1132 b has various parallels to Earth, but in some ways it is also very different, according to the British and American team behind the study. 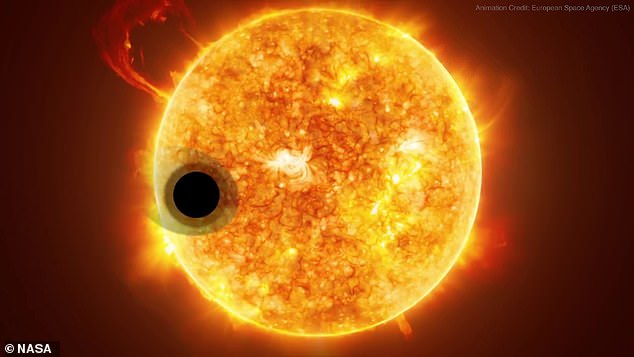 As the second atmosphere comes up from the surface of the planet it provides astronomers with a ‘window into the geology of another world,’ said Rimmer 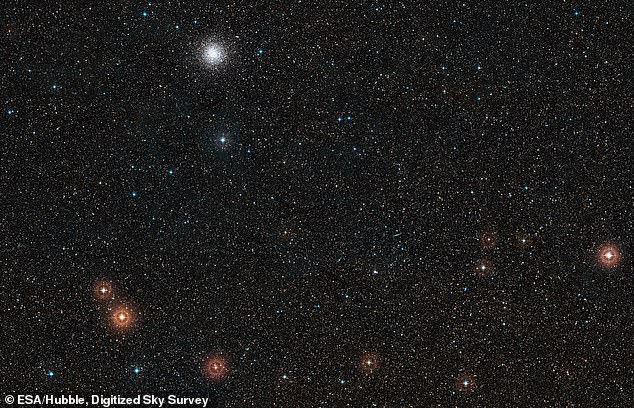 Pictured here is the region around the host star of the exoplanet GJ 1132 b, the star is too small to be visible in this wide field image

FROM GAS PLANET TO TERRESTRIAL WORLD

The planet, GJ 1132 b, is thought to have begun as a gas world with a thick hydrogen blanket of atmosphere.

It started out at several times the diameter of Earth nearly 5 billion years ago when it formed.

This so-called ‘sub-Neptune’ is believed to have quickly lost its primordial hydrogen and helium atmosphere.

This was due to the intense radiation of the hot, young star it orbits.

In a short period of time, such a planet would be stripped down to a bare core about the size of Earth. That’s when things got interesting.

To the surprise of astronomers, Hubble observed an atmosphere which, according to their theory, is a “secondary atmosphere” that is present now.

Both have similar densities, similar sizes, and similar ages, being about 4.5 billion years old and both started with a hydrogen-dominated atmosphere.

The two worlds were also very hot before eventually cooling down and have similar atmospheric pressure at their surface, the team discovered.

The big difference comes from how the two worlds first formed, authors explained.

Earth is not believed to be the surviving core of a sub-Neptune gas planet and orbits a comfortable distance from a yellow dwarf sun – within the habitable zone.

GJ 1132 b is so close to its host red dwarf star that it completes an orbit the star once every day and a half, keeping it tidally locked with one face always facing the star.

‘The question is, what is keeping the mantle hot enough to remain liquid and power volcanism?’ asked Swain, who added that this system is special ‘because it has the opportunity for quite a lot of tidal heating.’

The phenomenon of tidal heating occurs through friction, when energy from a planet’s orbit and rotation is dispersed as heat inside the planet.

GJ 1132 b is in an elliptical orbit, and the tidal forces acting on it are strongest when it is closest to or farthest from its host star – getting as close as 1.2 million miles.

To show how close this is, the planet orbiting nearest to the sun is Mercury, and it 36 million miles away from our star – orbiting every 88 days. 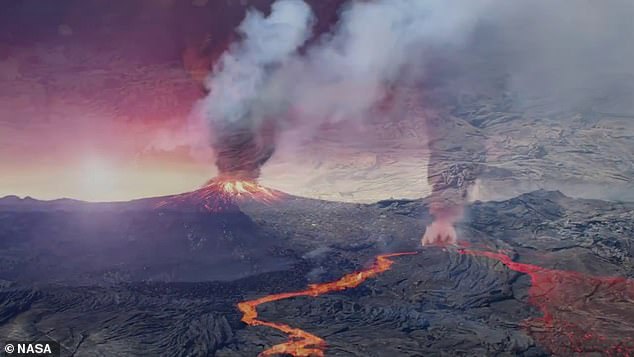 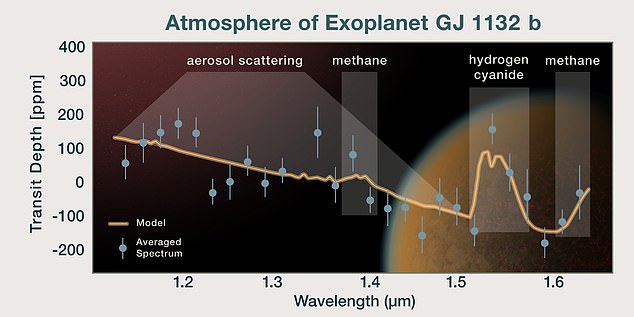 This plot shows the spectrum of the atmosphere of an Earth sized rocky exoplanet, GJ 1132 b, which is overlaid on an artist’s impression of the planet

JAMES WEBB SPACE TELESCOPE: A CHANCE TO LOOK FURTHER THAN BEFORE

The James Webb telescope has been described as a ‘time machine’ that could help unravel the secrets of our universe.

The telescope will be used to look back to the first galaxies born in the early universe more than 13.5 billion years ago.

It will also observe the sources of stars, exoplanets, and even the moons and planets of our solar system.

Most of its instruments have an operating temperature of roughly 40 Kelvin – about -387 Fahrenheit.

The space agency has already poured $7 billion (£5 billion) into the telescope.

When it is launched in 2021, it will be the world’s biggest and most powerful telescope, capable of peering back 200 million years after the Big Bang.

In the GJ 1132 system there are thought to be as many as three planets, this one closest to the star orbiting every 1.6 days, another orbiting every 8.9 days and an unconfirmed exoplanet orbiting the star every 176 days.

At least one other planet in the host star’s system also exerts a gravitational pull on the GJ 1132 b, according to the astronomers behind the study.

The consequences are that the planet is squeezed or stretched by this gravitational ‘pumping’ between the nearby star and relatively close planet, creating a tidal heating that keeps the mantle liquid for a long time.

A nearby example in our own Solar System is the Jovian moon, Io, which has continuous volcanism as a result of a tidal tug-of-war between Jupiter and the neighbouring Jovian moons.

The team believes the crust of GJ 1132 b is only a few hundred feet thick, much thinner than the 18 mile thickness of Earth’s crust.

The thin crust is ‘much too feeble’ to support volcanic mountains but the flat terrain may have been ‘cracked like an eggshell’ due to tidal flexing.

Hydrogen and other gases could be released through such cracks in the crust.

‘This atmosphere, if it’s thin — meaning if it has a surface pressure similar to Earth — probably means you can see right down to the ground at infrared wavelengths.

The James Webb Space Telescope is a follow on mission to the Hubble telescope, a joint project between NASA and the European Space Agency, it will be able to observe distant stars, worlds and galaxies in much greater detail.

‘If there are magma pools or volcanism going on, those areas of the surface will be hotter’ than if volcanism wasn’t happen, said Swain.

‘That will generate more emission, and so they’ll potentially be looking at the actual geological activity — which is exciting!’

This result is significant because it gives exoplanet scientists a way to figure out something about a planet’s geology from its atmosphere,’ added Rimmer.

‘It is also important for understanding where the rocky planets in our own Solar System fit into the bigger picture of comparative planetology, in terms of the availability of hydrogen versus oxygen in the atmosphere.’

Details of the discovery are available on the pre-print server arXiv.org.

Children of Chernobyl parents have no higher number of DNA mutations 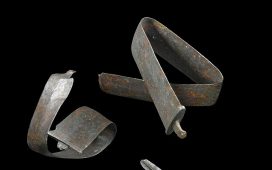 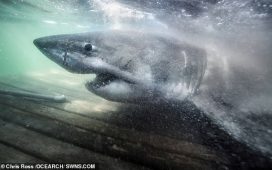 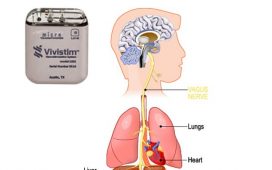 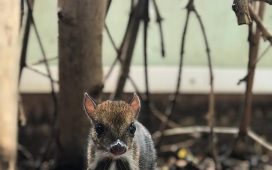