Astronauts on the International Space Station will have to wait for their new toilet after the launch of a resupply mission was delayed due to a data glitch.

The Northrop Grumman Cygnus spaceship was due to launch from Wallops Island, Virginia at 02:43 BST but was scrubbed with no new launch date announced.

The $23 million toilet, called the ‘universal waste management system’ (UWMS), is designed to better accommodate the female anatomy and features a funnel system for urine and small ridges on the seat to help astronauts better position themselves.

ISS astronauts are testing the toilet – for ease of use, functionality and even smell – ahead of its inclusion in the Orion spaceships taking crew to the Moon and Mars.

As well as a new loo, the Cygnus supply mission also included crew possessions, clothing, science experiments and even cosmetics by Estee Lauder.

NASA revealed images of the new design, with a seat better suited for women and a more female-friendly urinal suction system

The UWMS, pictured here as a design prototype, could be used on short- and long-duration NASA missions

NASA and Northrop Grumman called off the launch – on top of an Antares rocket – just minutes before it was due to liftoff from the launch pad in Virginia.

Because the countdown had encountered a five-minute delay earlier in the evening it pushed the launch to another day, meaning they missed their window.

No specific details have been given for the delay, but Northrop Grumman tweeted that it was scrubbed ‘after receiving off-nominal data from ground support equipment.’

The company has yet to announce a new launch date, but it is thought any potential glitch in the equipment would need to be fixed before they can get a new slot.

When it is launched the Cygnus freight ship will pursue the ISS for two and a half days with 8,000 pounds of cargo, provisions and experiments before connecting.

Astronauts will then work to install the new zero gravity toilet and any other experiments being sent to the station.

On board the ISS there is a toilet which has several attachments.

As there is no gravity in space, liquids do not flow but accumulate in floating globes.

To counter this problem, there are hoses which are used and provide pressure to suck the fluid from the body.

Each astronaut has their own personal attachment.

When a toilet is not available or the astronaut is on a space-walk, the astronauts use MAGs (maximum absorbency garments) which are diapers that soak up all the waste.

They are effective for short missions but have been known to leak occasionally.

The zero gravity toilet has a lower mass and volume than previous systems, is simpler to use, provides increased crew comfort and performance, and treats urine so that it can be safety processed by the spacecraft recycling systems.

The team developing the new loo for NASA took part in a Reddit AMA and said it will be tested on the ISS before being more widely used in Orion spacecraft to the Moon.

READ  Hubble at 30: a view into our cosmos – podcast

In terms of smell the team said the toilet ‘collects and filters the odors with an odor bacteria filter. The air coming from previous toilets has been said to be the sweetest smelling air. We hope this toilet is even better.’

The development of waste collections systems for spacecraft presents some significant challenges due to the lack of gravity in space.

Urine is processed and treated to often be reused as drinking water, while faeces is collected in individual bags and stored in containers.

Successful capture and ease of use for ‘simultaneous urination and defecation for mixed gender crews’ have been limitations of the ISS’s system, however, due to differences in the positions of male and female anatomy.

To enable female astronauts to do number ones and number twos simultaneously, the seat in the new design has been moved forward from its central location.

This allows the funnel to be ‘moved closer’ to the female crew member’s body, and to be ‘positioned a more favourable upright angle’.

Another key feature of the UWMS is a urine pre-treatment dose pump, which enables water recovery from urine. 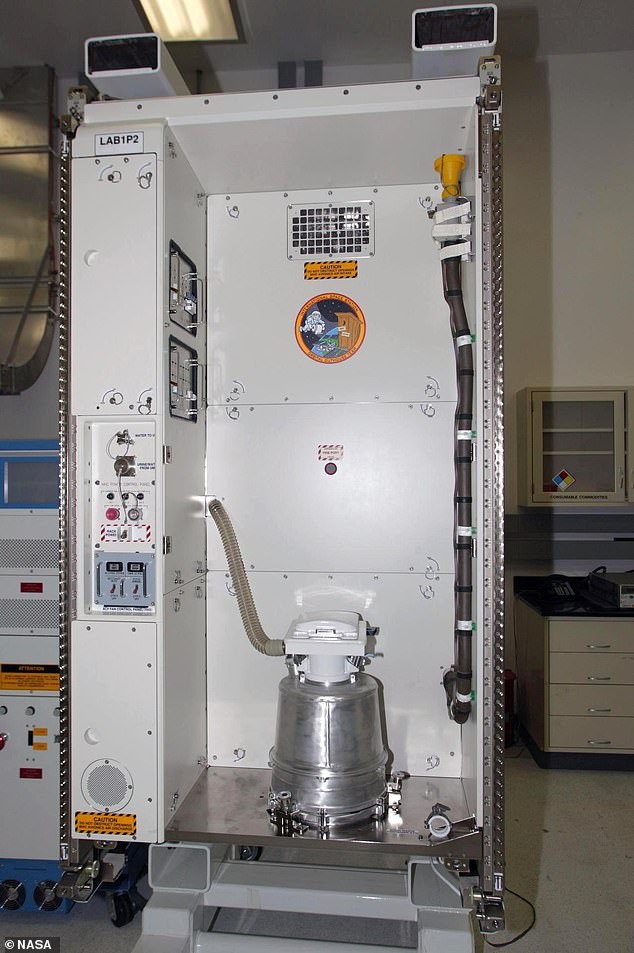 The current ISS toilet system. Space toilets have been designed predominantly with men in mind and can cause problems for female astronauts

Air will pull urine away from the seat to an filter, which will capture odour-causing molecules and bacteria.

NASA claims the UWMS will provide increased crew comfort and performance and the ‘hygienic collection of urine and faeces’.

Once the loo has been tested by ISS astronauts and any changes have been made, it could be used by the first woman and next man to walk on the Moon.

NASA plans to return humans to the surface of our only natural satellite in 2024 and they will get there in an Orion spaceship – likely equipped with the UWMS.