Nasa has chosen SpaceX to build the next-generation spacecraft that will return humans to the moon, further strengthening Elon Musk’s grip on the burgeoning public-private space industry.

The $2.9bn contract to build the lunar lander that will spearhead the Artemis program, Nasa’s ambitious project to return to the moon for the first time since the final Apollo mission in 1972, was announced on Friday.

“The Artemis lunar landing is a key piece to our moon-to-Mars strategy,” Steve Jurczyk, acting Nasa administrator, told reporters. “Today is a big step forward. This is an incredible time to be involved in human exploration for all humanity.”

Musk’s company is currently the only operation with the capability of launching astronauts from US soil. But Nasa’s decision to go with a sole contractor for its human landing system (HLS) raised eyebrows.

Traditionally, the agency has preferred to stimulate competition and protect against setbacks by keeping at least two contractors on the payroll.

This time, partly for budgetary reasons, Nasa chose to reject proposals by the Amazon tycoon Jeff Bezos’s Blue Origin, a partnership with Lockheed Martin, Northrop Grumman and Draper; and the defense contractor Dynetics.

All three bids were chosen for the preliminary stages of the HLS project in 2020.

“Congrats to SpaceX, but [I’m] honestly shocked Nasa is going with a single provider here,” Casey Dreier, senior space policy adviser, said in a tweet. “Of course, SpaceX always acts as if it’s a constant competition with itself. And it’s 100% delivered on its capability and price promise so far.”

Dreier calculated that “if SpaceX pulls this off, the US will get a human-capable lunar landing system for 13% the price of Apollo era hardware”.

The Artemis program also includes the Space Launch System, the most powerful rocket ever built, and the Orion spacecraft that will ferry crews. The SpaceX bid features its Starship landing system, currently under development.

Nasa has said the Artemis program will land the first woman and the first person of color on the moon. The Trump administration directed the agency to achieve the goal by 2024 but the timeline slipped because of budget cuts.

Joe Biden’s request to Congress, announced earlier this month, seeks $24.7bn for Nasa, an increase of 6.3% on the previous year, including $6.9bn for Artemis.

After the retirement of the space shuttle fleet in 2011, the US was unable to launch humans into space for nine years. Now, SpaceX continues to press ahead with its human spaceflight program. Since May 2020 it has sent two crews to the International Space Station. A third mission, Crew 2, is set for launch on 22 April. 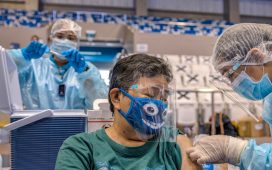