On Tuesday, October 6, proceedings in the N2.2bn fraud trial of a former governor of Ekiti State, Mr Ayodele Fayose, and a firm, Spotless Investment Limited, was stalled on Tuesday with a request for an adjournment by the prosecuting counsel for the Economic and Financial Crimes Commission, Mr Rotimi Jacobs (SAN).

The prosecutor, who was expected to call the eighth prosecution witness, told Justice C.J. Aneke that he was having difficulty bringing the witness to court “because of happenings in the EFCC.”

The EFCC recently went through a stormy episode with the arrest of its then acting Chairman, Ibrahim Magu, who was forcefully taken before the presidential probe panel, headed by a former President of the Court of Appeal, Justice Ayo Salami (retd.).

Magu, whose probe is still ongoing, was subsequently suspended alongside 12 other senior officials of the commission, including the EFCC Secretary, Ola Olukoyede.

His probe is predicated on allegations against him by the Attorney General of the Federation and Minister of Justice, Mr Abubakar Malami (SAN).

Magu was accused of abuse of office and mismanagement of recovered assets.

On Tuesday, following the request by the prosecutor, Justice Aneke adjourned Fayose’s trial till October 19 and 20, 2020.

In the charges, the EFCC alleged, among other things, that Fayose, on June 17, 2014, “took possession of the sum of N1, 219, 000,000 to fund your 2014 gubernatorial campaign in Ekiti State, which you reasonably ought to have known formed part of the proceeds of an unlawful act, to wit: criminal breach of trust/stealing.”

The ex-governor was also alleged to have on the same day “received a cash payment of $5,000,000 from Senator Musiliu Obanikoro, the then Minister of State for Defence, which sum exceeded the amount authorised by law and you thereby committed an offence contrary to sections 1 and 16(d) of the Money Laundering (Prohibition) Act, 2011 (as amended) and punishable under Section 16 (2)(b) of the same Act.”

The EFCC also alleged that Fayose purchased a property known as No.44, Osun Crescent, Maitama, Abuja for N200m in the name of “your elder sister, Mrs Moji Oladeji.”

But Fayose and Spotless Investment Limited pleaded not guilty to the charges.

Kessington Adebutu: Celebrating a gallant trailblazer and colossus at 85

#EndSARS: TVC back on air — four days after mob attack 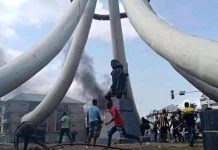