Mystery surrounds the sudden departure of Phillip Schofield’s former personal assistant and runner after he left This Morning for a rival ITV show.

The male runner, who had a close working relationship with Schofe, quit the show earlier this year and is now working on Loose Women – frequently fronted by Ruth Langsford, who has reportedly lodged an official complaint against Phil.

And while ITV has said the runner was promoted, other staff are said to be confused about the move.

“It was odd because they were so close and then he up and went to Loose Women and they didn’t seem to be talking much anymore,” one insider told the Sun .

ITV has dismissed rumours of a ‘toxic atmosphere’ on This Morning as “malicious gossip”, insisting there’s no issue between Phillip and his co-host Holly Willoughby.

“It’s deeply disappointing and unfair for Phillip to be the target of this sort of malicious gossip,” said a spokeswoman for the broadcaster.

“Phillip is a much respected broadcaster and colleague and this is absolutely not a description of This Morning that we recognise.

“Holly and Phil are great friends both on and off screen and are popular among viewers and colleagues alike.”

It comes as an actor who previously worked with Phil branded him a “t**t” on Twitter .

Former Emmerdale and Tracy Beaker star Connor Byrne blasted the host, tweeting: “I’ve seen a lot of the nonsense on here about Philip Schofield’s encounter with the duplicitous Bulsh*t Johnson this morning and, having worked with Mr Schofield I can categorically state cuddly Phil is a total t**t. So, it’s no surprise.

One member of the ITV talent pool who hasn’t been shy about making her feelings clear is Amanda Holden , who in June this year confirmed she and Phillip had been feuding for months.

Her upset came when Phil allegedly prevented her from taking up her dream role as Holly’s temporary stand-in last autumn when the blonde bombshell jetted to Australia to co-present I’m A Celebrity 2018.

And Amanda commented again this week when she was quizzed on Heart Breakfast about Ruth’s reported official complaint against Schofe.

Ashley Roberts began: “Lots of buzz around Philip Schofield at the moment. There are reports that things are a little tense between him and Holly Willoughby as well as Ruth Langsford. ITV says it’s just gossip and that he and Holly are great friends, both on and off screen.”

“If only there was someone here who might be able to help us with that story,” joked Amanda’s co-host Jamie Theakston.

“Listen, I’ve drawn a line under all those issues with Phillip,” Amanda said guardedly.

“Just give us some kind of…?” asked Jamie hopefully.

“Well I’m just gonna say that I really admire anyone that sticks up for themselves because it is not an easy thing to do,” Amanda said.

“There is a tin opener and there’s a can somewhere and other people have found the tin opener. That’s all I’m saying,” she added. 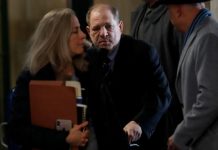