The coelacanth – a giant, mysterious fish that has survived since the time of the dinosaurs – can live for 100 years, a study has found.

The slow-moving fish, which grow to be the size of a human, are nicknamed a “living fossil”, and also grow at a very slow pace.

Females do not reach sexual maturity until their late 50s, the study by French scientists said, while male coelacanths are sexually mature at 40 to 69 years old. And maybe strangest of all, researchers think pregnancy in the fish lasts about five years.

Coelacanths, which have been around for 400m years, were thought extinct until they were found alive in 1938 off South Africa. Scientists believed for a long time that coelacanths live about 20 years.

But by applying a standard technique for dating commercial fish, French scientists calculated they actually live close to a century, according to a study in the journal Current Biology released on Thursday.

Coelacanths are so endangered that scientists can only study specimens already caught and dead.

In the past, scientists calculated fish ages by counting big lines on a specific coelacanth scale. But the French scientists found they were missing smaller lines that could only be seen using polarised light — the technique used to work out the age of commercial fish.

Bruno Ernande, a marine evolutionary ecologist at France’s marine research institute and co-author of the study, said polarised light revealed five smaller lines for every big one. The researchers concluded the smaller lines better correlated to a year of coelacanth age — and that indicated their oldest specimen was 84 years old.

Using the technique, the scientists studied two embryos and calculated the largest was five years old and the youngest was nine years old. So, Ernande said, they calculated pregnancy lasts at least five years in coelacanths.

That five-year gestation is “very strange” for fish or any animal, said Harold Walker of Scripps Institution of Oceanography in San Diego, California. He was not part of the research.

Even though coelacanths are unrelated genetically to other deep-sea creatures such as sharks and rays, they are similar in ageing slowly, Ernande said. Sharks can live to be hundreds of years old.

“They might have evolved similar life histories because they are sharing similar type habitats,” he said.

See also  Blue Moon: ‘Flower Moon’ set to light up the sky on May 18
Share on FacebookShare on TwitterShare on PinterestShare on Reddit
newscabalJune 18, 2021 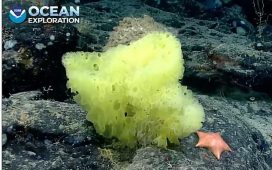 Extreme weather will be the norm and UK is not prepared, report warns