Mum gives birth to baby boy in a bus stop


When mum-to-be Becky’s waters broke in the car, just as it turned into the hospital, she thought she’d make it just in time.

But her baby came quickly and she only got as far as the bus stop outside Pinderfields Hospital in Wakefield before she felt the need to push.

Baby Barnaby Andrew arrived in the shelter on Sunday July 25, assisted by midwife Saskia Bulmer who got off the bus at the stop, ready for work.

Luckily, both mum and baby were fine, much to the relief of dad Phlip, who wrapped his new son in his shirt.

The story was shared by the Mid Yorkshire Hospitals NHS Trust on Facebook.

A spokesperson for the trust said: ‘As we finish the week we would like to share the wonderful story of Philip and Becky, who on Sunday 25 July welcomed their baby boy, Barnaby, into the world… at the bus stop outside Pinderfields Hospital!

‘On the evening of Saturday July 24, Becky’s waters had started to leak. Her contractions weren’t heavy so she got comfortable at home and went to bed, only to wake up around 6am with painful contractions every three minutes.

‘Becky and Philip jumped into their car and phoned ahead to our Maternity department at Pinderfields to let them know that they were on their way.

‘At 6.50am, as they turned into the grounds of Pinderfields Hospital, Becky’s waters broke in the car.’

Although Becky was close to the hospital when her waters broke, she was in so much pain, Philip struggled to move her inside.

The post continues: ‘It took a good five minutes for Philip to get her out of the car.

‘As they reached the bus stop just outside of the entrance to Pinderfields, Becky started to feel that the baby was coming.

‘Perfectly timed, the bus pulled up to the bus stop and midwife Saskia Bulmer got off to start her shift at the hospital.

‘Saskia instructed Philip to take off his shirt to wrap the baby up in, and within a few minutes, at 7.05am, Barnaby was born.

‘Saskia helped the couple to the Maternity unit where Barnaby was placed under a heat lamp to bring him back up to temperature. By 7.30am it was all over.

‘Congratulations to Philip and Becky on the birth of Barnaby Andrew. Your birth may not have been as planned, but it will certainly be one to remember.’


MORE : These retro baby names could make a big comeback in 2021


MORE : Baby who slipped out of uterus into mum’s abdomen and was starved of oxygen defies the odds to walk and talk

The Covid uni crisis – will it be the greatest student hangover of all time?

What links Olly Alexander with Abel Tesfaye? The Weekend quiz 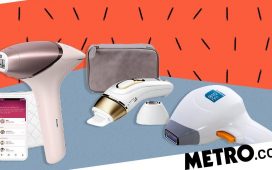 Hair today, gone tomorrow: Everything you need to know about laser hair removal