Advent calendars come in all shapes and sizes these days.

But if you want a more sustainable option, a calendar you can fill yourself, year after year, is a great option.

One mum took it a step further and recycled materials she had lying around the house to create an incredible reusable calendar for her three kids.

Mum-of-three Sue designed a calendar made from firewood, string and some clothes pegs.

Her husband put the leftover wood together in a tree shape and she added the finishing touches.

She then attached little envelopes she already had, filled each one with chocolate coins and added a number to the front.

She attached battery-powered lights to make it even more festive.

She said: ‘All made from stuff in the house/shed already (including the light string – has rechargeable batteries in). Full of foil-wrapped coins for our 3 children.

‘Three fewer plastic advent calendars! Credit to my husband for making what I described out of our firewood pile.’

Sue used leftover wood but if you don’t have any lying around, you could try recycling an old pallet, that you can get through Facebook. Although Sue kept her tree plain, you could add some colour if you have any leftover paint lying around.

String and clothes pegs can be picked up from a pound store.

Sue said she had the tiny envelopes leftover from when she used to use them to put her kid’s dinner money in but now the school uses a cashless system so she didn’t need them anymore.

You can pick them up 100 on Amazon for £2.15 if you want to recreate your own calendar.

What a great idea! 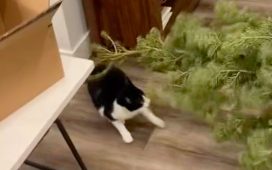 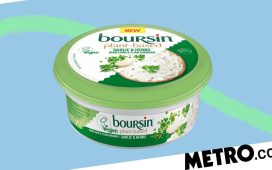