Morrisons is axing 3,000 middle managers as part of an overhaul of its store operations that also involves the recruitment of thousands of shopfloor staff.

In the wake of a disappointing Christmas, the Bradford-based supermarket is eliminating higher-paid managerial roles in its near-500 store chain. At the same time it is creating 7,000 new hourly-paid roles in a bid to improve customer service and reduce the number of gaps on its shelves. The changes will result in a net increase of 4,000 jobs with many of the new positions on its Market Street deli counters.

He suggested that some salaried managers may want to take jobs as shop assistants: “Whilst there will be a short period of uncertainty for some affected by these proposals, we will be supporting them through this process and there are jobs available for everybody who wants to continue to work at Morrisons.”

Joanne McGuinness, national officer at shopworkers union Usdaw said: “This is a big upheaval for the Morrisons store management team and is devastating news for our members. Despite a large number of hourly-paid roles being created, they will clearly not be a like-for-like position for the managers impacted.”

Morrisons briefed staff on the proposed changes on Thursday morning, according to industry magazine Retail Week which first reported the story. It has now launched a consultation over the plans, which is expected to last 45 days.

The big four supermarkets Tesco, Sainsbury’s, Asda and Morrisons are all losing ground to the German discounters Aldi and Lidl and there was no let-up in the customer exodus over the important Christmas trading period. The tough climate has led the major chains to launch a fresh round of cost-cutting.

On Tuesday, Sainsbury’s said it was cutting management jobs as it presses on with the integration of Argos, which it bought for £1.4bn in 2016. Earlier this month the Guardian revealed that more than 2,800 Asda workers faced the threat of redundancy as the supermarket chain looked to cut costs. 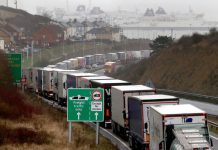 Meet the booksellers who are fighting back against the algorithm

Ocado posts £214m loss as it ramps up spending on logistics