More than 40 military staff and recruits at an academy in central Switzerland were sent to hospital on Thursday after they suddenly fell violently ill, the government said.

The Swiss defence department said that on Thursday afternoon, 43 recruits and members of the Jassbach academy in Linden, in Bern canton, suddenly suffered from acute gastrointestinal problems, with diarrhoea and vomiting.

“As a result, all 43 service members were sent by ambulance and helicopter to hospitals and military medical facilities,” the department said.

An army spokesman told the ATS news agency that four of those affected were in a critical condition.

The authorities were still trying to determine the cause of the disease outbreak.

As a precaution, the canton of Bern has imposed a quarantine on the Jassbach site, which is specialised in cyber-defence training.

Coronavirus tracker: Where has deadly coronavirus been? Has it reached UK? 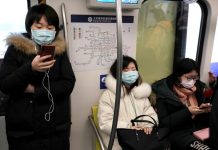 Dow Jones falls 150 points due to US Chinese coronavirus case

Coronavirus outbreak could be ’10 TIMES worse than SARS epidemic that killed 800′, expert warns

Vitamin B12 deficiency: Five vegan foods you can eat to prevent the condition

First ever robotic heart could put an end to transplants, scientists say