The US Navy detonated a World War II-era bomb discovered on a beach in North Carolina.

The 100-pound aerial bomb was still active, according to the Explosive Ordnance Disposal (EOD) unit that detonated it on October 23 using a combination of explosives including C-4 – the explosion  sent smoke and debris 60 feet in the air when it went off.

The vintage ordnance was discovered on Cape Hatteras National Seashore beach in Buxton by a resident who, at first glance, thought it was a log.

Officials have not confirmed whether the bomb belonged to the US military or German enemies. 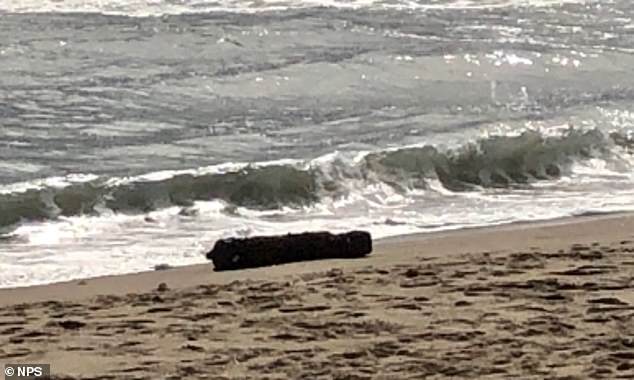 A 100-pound bomb from World War II was discovered on the beach in North Carolina’s Outer Banks on October 23. German U-boats frequently targeted the area in 1942, earning it the nickname of ‘Torpedo Alley’

A three-person EOD team was dispatched from Norfolk, Virginia, to detonate the relic around 12:30pm using a combination of explosives.

In video of the explosion, a dull thud can be heard and smoke and sand is seen rocketing  into the sky.

A half-mile safety perimeter was set around the detonation zone, though the explosion was heard much further away.

The perimeter was lifted by Thursday afternoon and park staff started working immediately to cover the crater. 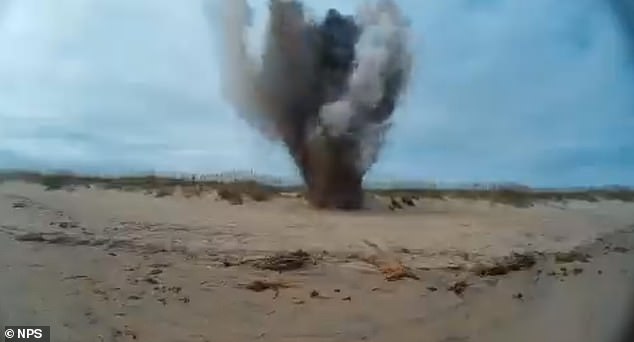 The U.S. Navy Explosive Ordnance Disposal unit detonated the live bomb with C-4 and other explosives, sending a smoke and debris 60 feet in the air.  A half-mile security perimeter was established around the site, but the explosion could be heard from much further away

Michele Quidley, a resident of Hatteras Island was walking her dog when the pet noticed a strange object sticking out of the sand deep inside the beach near the Cape Hatteras Lighthouse Beach Access parking area.

‘When we reached it, I thought it was a log,’ she told The Island Free Press, ‘but then I realized it was made out of metal.’

Quidley contacted the National Park Service and waited for authorities to arrive.

‘I was worried about just leaving it there, because there are a lot of visitors on the beach, and I didn’t want kids to play with it, or someone to accidentally pick it up and take it home as a souvenir,’ she said. 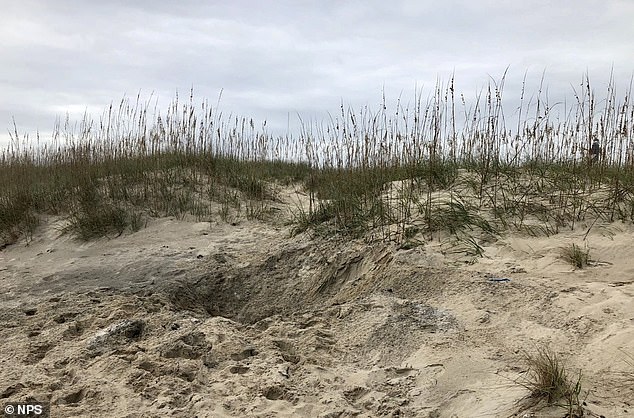 The crater left by the detonation. Other unexploded ordnances washed ashore nearby in 2017, including one at the edge of Hatteras Inlet and another on a temporary sandbar off Cape Point

‘It was just a normal day before that happened, and I was surprised that no one else [on the beach] saw it before I did.’

The Outer Banks are a 200-mile string of barrier islands off the coast of North Carolina and southeastern Virginia.

German U-boats often targeted vessels in the area during the war, earning the area the nickname ‘Torpedo Junction.’

In the spring of 1942, nearly 400 merchant vessels were sunk by German submarines.

According to the National Park Service, Operation Paukenschlag (Operation Drumroll), ‘came perilously close to knocking the United States of America out of World War II.’

U-boat commander Karl Donitz realized he could sabotage US war preparations by quickly and decisively striking at the eastern seaboard.

According to the National Park Service, ‘flaming tankers burned so brightly off the Outer Banks that, on shore, it was said, one could read a newspaper by the glow at night.’

Several unexploded bombs washed ashore nearby in 2017, including one at the edge of Hatteras Inlet and another found on a temporary sandbar off Cape Point.

While this encounter with antique ordnance went off without a hitch, some have had more shocking results.

No one was injured as military divers had been positioned at a safe distance. 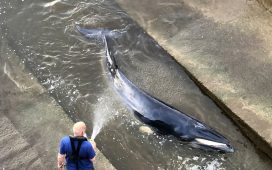 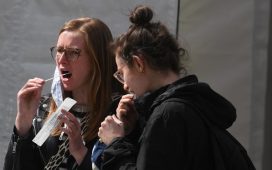