Pupils in England could be banned from bringing phones to school as soon as January, it has emerged.

Ministers are targeting the start of the year or after the Easter holidays in 2022 to ban phones, according to i News.

The consultation, which closes on August 10, came as Mr Williamson said phones were “not just distracting but they can have a damaging effect on a pupil’s mental health and wellbeing”.

The idea is opposed by unions – who say schools are capable of enforcing discipline themselves – but supported by the Children’s Commissioner Dame Rachel de Souza.

Dame Rachel told i News Wi-Fi connectable smartphones would need to be left at home or left in pupils’ bags during school hours. Parents might also be encouraged to buy children older style ‘brick’ phones that do not connect to the internet, she suggested.

Do you think phones should be banned at schools? Share your views in the comments below…

She rejected arguments from some headteachers that banning phones would take away their authority and rob schools of the chance to teach children about using the devices and the internet safely.

Banning phones could also “take away the pressure a bit from parents, with younger and younger children having to be bought these handsets that are not cheap,” Dame Rachel added.

“It’s the distraction in the school provided by that internet connection and all the harms that can go with it [that’s the problem],” she said.

“We know that many underage children are accessing things they shouldn’t on the internet, and let’s just keep it out of school frankly.”

Geoff Barton, General Secretary of the Association of School and College Leaders, accused Mr Williamson of “playing to backbenchers” with the proposed mobile phones ban.

He said: “The Education Secretary appears to be obsessed with the subject of mobile phones in schools.

“In reality, every school will already have a robust policy on the use of mobile phones; it isn’t some sort of digital free-for-all.

“Approaches will vary between settings and contexts, but this is an operational decision for schools, not something that can be micromanaged from Westminster.

“Frankly, school and college leaders would prefer the Education Secretary to be delivering an ambitious post-pandemic recovery plan and setting out how he intends to minimise educational disruption next term, rather than playing to backbenchers on the subject of behaviour.”

But the figure prompted education recovery chief Kevan Collins to resign as he warned the funding did not go nearly far enough.

The government looks set to end the ‘bubble’ isolation system for pupils who have come into contact with a positive Covid case after the numbers off school reached a record high in England.

Around 279,000 children were self-isolating due to a possible contact with a case, a further 24,000 pupils had a suspected case of coronavirus and 15,000 had a confirmed case on June 24.

The Prime Minister will update the nation on his roadmap out of lockdown plans on Monday.

It is believed he will be likely to say school bubble rules will be scrapped along with other social distancing measures from July 19. 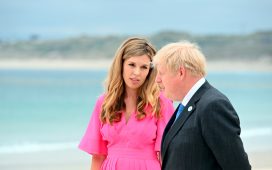