Padres rookie right-hander Chris Paddack had a no-hitter through seven innings before giving up a home run in San Diego’s 3-2 win over the host Miami Marlins on Wednesday.

Starlin Castro homered to lead off the eighth for Miami’s first hit.

Paddack (6-4) allowed the one hit over 7 2/3 innings. He issued one walk and had eight strikeouts while throwing 94 pitches in his 16th major league start. San Diego closer Kirby Yates allowed an unearned run in the ninth but still recorded his 31st save.

The Padres scored all of their runs with two outs in the fourth inning. Manuel Margot started the rally with a two-out double to right, and he scored on Greg Garcia’s single. Austin Hedges followed with a two-run homer.

David Freese and Justin Turner homered to lead visiting Los Angeles past Philadelphia in a game that featured a 2-hour, 37-minute rain delay.

Pedro Baez (4-2) pitched 1 2/3 shutout innings and earned the victory for the Dodgers, who have won two of three in this series. The finale will be played Thursday afternoon, less than 12 hours after the prior game ended.

Dustin Garneau homered for the Angels, who lost for the first time in six games since the All-Star break. Los Angeles was without All-Star Mike Trout for the third consecutive game because of a right calf strain.

Cole (10-5) allowed one run on seven hits with one walk and 11 strikeouts. The right-hander fanned the last five batters he faced.

Mike Clevinger matched a career high with 12 strikeouts, and rookie Oscar Mercado and Greg Allen each drove in a pair of runs as host Cleveland defeated Detroit.

Francisco Lindor belted a homer to ignite a four-run eighth inning for the Indians, who have won 10 of their last 12 to move within four games of the American League Central-leading Twins.

Nicholas Castellanos launched a solo homer and Jeimer Candelario had an RBI single for the Tigers, who have lost 11 of their past 13 contests overall and 11 of 12 against Cleveland this season.

Brock Holt also had three hits for the Red Sox, who have won two of the first three contests in the four-game series. Eduardo Rodriguez (11-4) earned the victory, allowing two runs on three hits and three walks with four strikeouts.

Duffy (4-5), who entered the game with a string of 14 2/3 scoreless innings against the White Sox, didn’t allow a run until Ryan Goins launched a no-out, two-run home run in the sixth. He wound up yielding two runs on six hits in six innings. Duffy struck out five and didn’t walk a batter.

The Orioles broke the game open with five runs in the eighth. Mancini had a two-run homer in that frame, and he finished with three RBIs. Anthony Santander got a sacrifice fly while Stevie Wilkerson had an RBI double and then scored on a Rio Ruiz single.

The game was delayed 1 hour, 32 minutes by rain at the start.

Eduardo Escobar drove in five runs and homered from both sides of the plate, including a two-run blast from the left side in a seven-run first inning that Arizona chased Texas starter Jesse Chavez (3-5). Escobar connected from the right side in the sixth, a three-run shot that was good for a 17-3 lead.

Chad Pinder and Ramon Laureano also homered for the A’s, who scored all of their runs via the long ball. Oakland swept the two-game series and has won six in a row overall, outscoring its opponents 47-13.

Bailey (8-6), a veteran right-hander, was acquired Sunday in a trade with Kansas City. He allowed two runs on seven hits with no walks and six strikeouts.

Darvish (3-4) turned in his second straight outing of two-hit ball over six scoreless innings. He struck out seven and got his first career win at Wrigley after 13 starts without one as a member of the Cubs. He had never before pitched in a win at Wrigley, including a loss with the Texas Rangers in 2016.

Darvish also earned his first win this season since April 27 after 12 no-decisions and a loss.

The Pirates carried a 4-3 lead into the seventh, and Francisco Liriano (4-2) retired the first batter he faced before giving up a single to Tommy Edman and issuing a walk to Jose Martinez. Goldschmidt then greeted Michael Feliz by homering to left-center field on a 2-2 pitch.

The rally made a winner out of John Brebbia (3-3), who threw two perfect innings of relief. Andrew Miller tossed a 1-2-3 eighth before Carlos Martinez earned his sixth save despite allowing a run in the ninth.

Donovan Solano led off the sixth inning with a go-ahead home run as San Francisco completed its first four-game sweep of Colorado in Denver since 2011.

The win was the Giants’ fifth straight and sixth in seven games on a just-completed road trip that began at Milwaukee. San Francisco passed the Rockies in the standings, having won eight of nine and 12 of 14 overall.

Derek Holland (2-4), the second Giants pitcher, was credited with the win after throwing 1 2/3 innings of hitless, scoreless ball.

Christian Yelich homered for the third time in four days, one of two struck by Milwaukee hitters, to help the Brewers defeat visiting Atlanta. The win gave the Brewers their first series win over a team other than Pittsburgh since mid-May.

Yelich hit a solo homer in the sixth inning against Dallas Keuchel (3-3) to ignite a three-run outburst that allowed Milwaukee to put the game away and ensure a series victory. It was the 34th homer for Yelich, two shy of his career high total from 2018, when he was the NL Most Valuable Player.

Chase Anderson (5-2) pitched 5 2/3 scoreless innings and allowed one hit and three walks, striking out three. It was Anderson’s fifth straight start in which he has allowed two or fewer runs. He improved to 3-0 with a 3.37 ERA in six career starts against Atlanta.

With the Mets down 3-2 in the seventh, Smith swatted an 0-2 curveball for his ninth homer. He finished 2-for-3 off the bench, adding a run-scoring single in the eighth to give him a career-high four RBIs.

Rosario went 4-for-4 with a homer, triple, four runs and three RBIs. Adeiny Hechavarria had three hits, including two doubles, and scored twice.

The game between Tampa Bay and New York was postponed due to the forecast of severe weather in the vicinity of Yankee Stadium. The contest will be made up Thursday as part of a regular doubleheader beginning at 3 p.m. ET. 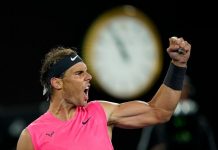