Following the Black Lives Matter protests earlier this year, the people behind the Miss England pageants decided to introduce a new category – Miss All African Colours.

Director Angie Beasley wanted to do more to highlight that the competition is open to all communities living in England, including the underrepresented.

Eight finalists have now been selected for the category, with the winners announced at Nollywood Studios in London.

The remaining contestants are Frankie Stewart, 20, Moshida Khalifah, 24, who is a private care clerk, Paige Ashton, 25, a senior analyst, and singer Zara-Lucy Whitehead, 22.

Each finalist dressed up in traditional attire and shared the images on their social channels to promote the pageant.

The winner of the category will be entered into the Miss England contest and become the face of luxury handbag brand All African Colours.

Director Angie wrote on the Miss England website: ‘It’s difficult to get the message across to all communities that anyone from any ethnicity can enter as long as they can abide by the rules and hold a British passport.

‘England is seen as a great destination of diversity and its important Miss England reflects that.’

The current Miss England, Bhasha Mukherjee, is the first Indian-born winner of the national title after winning the Asian Face category in the contest.

Due to the pandemic restricting more winners being announced, NHS doctor Basha is currently the longest-serving Miss England.

After her victory, and an attempt to recruit more Asian finalists by advertising in magazine Asiana, more people from the Indian subcontinent applied.

Constance Iloghue, who lives in London and is originally from Nigeria, has recently been crowned Miss Eco in the Miss England virtual final.

Now, Angie wants people from Africa to get more involved.

One of the contestants, Rehema Muthamia, 24, who has roots in Kenya and has a master’s in genetics, told Luton Today that all the finalists have become friends.

She said: ‘The campaign is to have more diversity and to be more representative of the UK, so I thought it was a great opportunity. As contestants, it’s been a beautiful experience and we’ve formed a sisterhood,’

Good luck to all those competing.


MORE : Woman loses 12 stone and plans to be in beauty pageant after leaving ‘toxic’ boyfriend 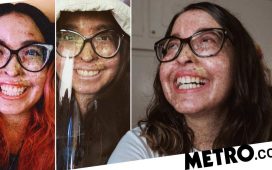 10 of the best cleansing balms

I was sexually abused at 11, but my mum won’t speak about it | Dear Mariella