A ‘hero’ mine-detecting rat who was awarded the animal equivalent of a George Cross for successfully locating landmines has died at the age of eight.

Magawa, who was trained by the Belgium-registered charity APOPO, discovered 71 landmines and 28 unexploded munitions in Cambodia – clearing more than 34 acres – during his five-year career.

APOPO said the African giant pouch rat ‘passed away peacefully at the weekend’.

It added that he spent ‘most of last week playing with his usual enthusiasm’ but had ‘started to slow down’ and became lest interested in food in his final days.

The charity said in a statement: ‘All of us at APOPO are feeling the loss of Magawa and we are grateful for the incredible work he’s done.

‘During his career, Magawa found over 100 landmines and other explosives, making him APOPO’s most successful HeroRAT to date. 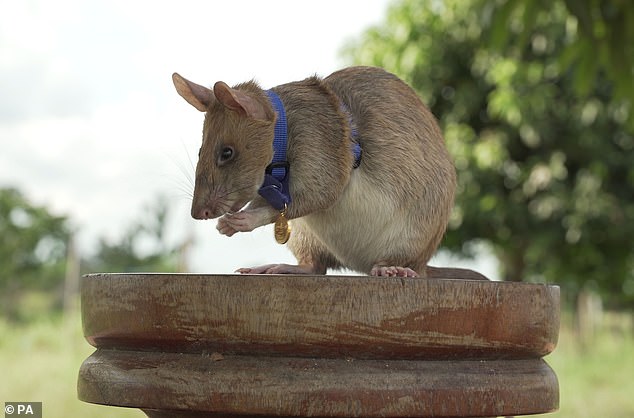 Magawa the rat was recognised for his work and presented with a miniature PDSA Gold Medal – the animal equivalent of the George Cross, in 2020. He passed away peacefully at the weekend. 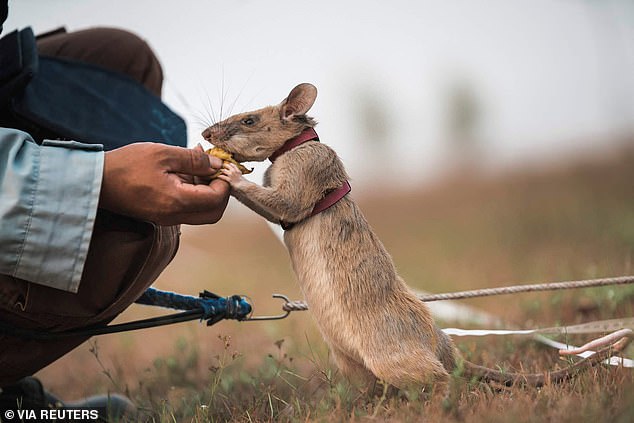 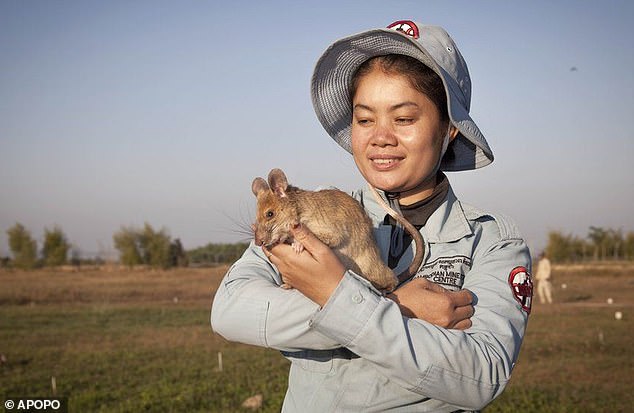 ‘His contribution allows communities in Cambodia to live, work, and play; without fear of losing life or limb.’

Magawa had retired last June after the hero rat’s handler Malen said the rodent was beginning to ‘slow down’ as he neared old age and it was time to ‘respect his needs’.

Months earlier, the giant African pouched rat, who can sniff out explosives ninety six times faster than conventional solutions, was recognised for his work and presented with a miniature PDSA Gold Medal – the animal equivalent of the George Cross.

Magawa remained with the charity, which is based in Tanzania, for a few more weeks in order to ‘mentor’ a new batch of rats who had been recently assessed by the Cambodian Mine Action Centre (CMAC).

APOPO added: ‘Every discovery he made reduced the risk of injury or death for the people of Cambodia.’

Speaking last June, his handler Malen told the BBC: ‘Magawa’s performance has been unbeaten, and I have been proud to work side-by-side with him.

‘He is small but he has helped save many lives allowing us to return much-needed safe land back to our people as quickly and cost-effectively as possible.’

Magawa’s intensive training started when the rodent was just four weeks old and staff at the APOPO charity in Tanzania start handling the rat and introducing him to sounds and smells.

Before graduating and working in the field, Magawa had to pass a blind test where a number of improvised landmines were hidden in a 400m2 area.

In September 2020, Magawa was formally recognised for his work and presented with a miniature PDSA Gold Medal, the animal equivalent of the George Cross.

He became the first rat in the charity’s 77-year history to receive such an award.

Following the achievement, Christophe Cox, CEO and cofounder of APOPO, said: ‘To receive this medal is really an honour for us. I have been working with APOPO for over 20 years.

‘Especially for our animal trainers who are waking up every day, very early, to train those animals in the morning. 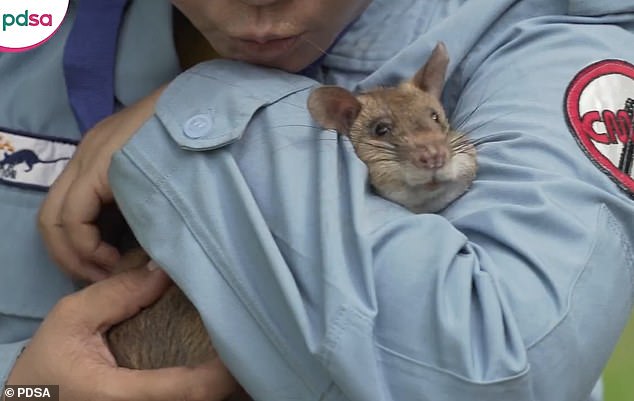 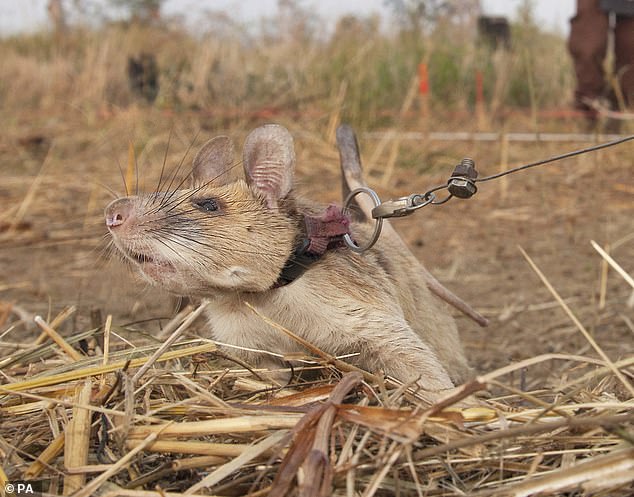 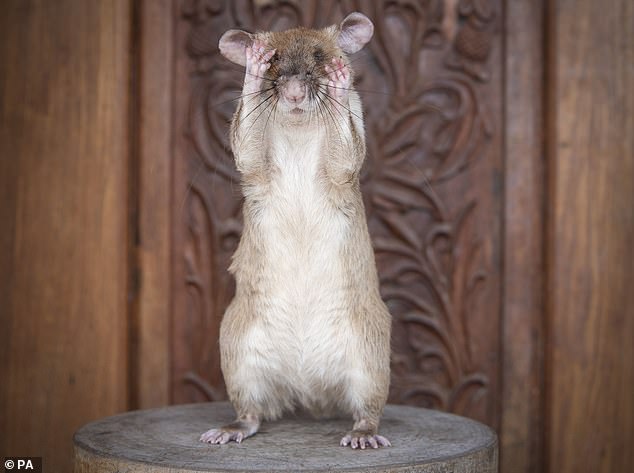 ‘But also it is big for the people in Cambodia, and all the people around the world who are suffering from landmines. The PDSA Gold Medal award brings the problem of landmines to global attention.’

‘Cambodia estimates that between four and six million landmines were laid in the country between 1975 and 1998, which have sadly caused over 64,000 casualties.

‘Magawa’s work directly saves and changes the lives of men, women and children who are impacted by these landmines. Every discovery he makes reduces the risk of injury or death for local people.

‘The PDSA Animal Awards programme seeks to raise the status of animals in society and honour the incredible contribution they make to our lives.

‘Magawa’s dedication, skill and bravery are an extraordinary example of this and deserve the highest possible recognition. We are thrilled to award him the PDSA Gold Medal.’ 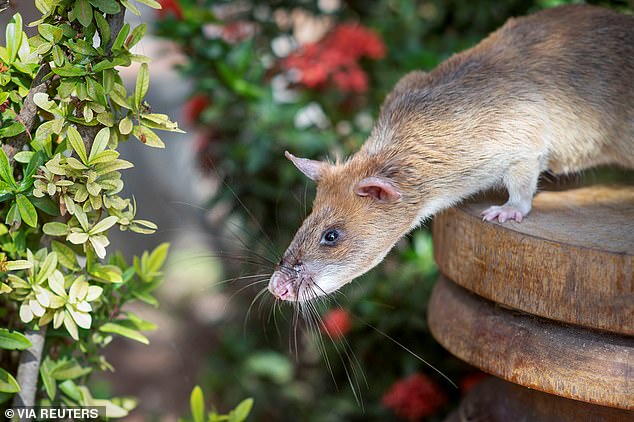 During their training with APOPO, rats are trained to associate the sound of a click with food at only 10 weeks old.

When they go near a tea egg containing the scent of TNT, the explosive substance in landmines, they will hear a click and receive a food reward.

The intelligent creatures are then taught how to distinguish between tea eggs containing TNT and those without it, only hearing a click and receiving a reward if they react with the positive eggs.

The animals can detect the chemical compound within explosives and ignore any scrap metal lying around, making them much faster than metal detectors.

Trainers then take the rats outside to work in soil trays in different conditions, with the tea eggs buried in the ground.

The rats can only qualify as a hero rat once they have discovered all the landmines in the field, making no more than one false indication. 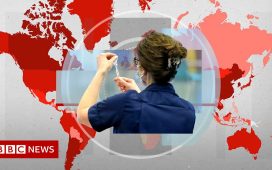 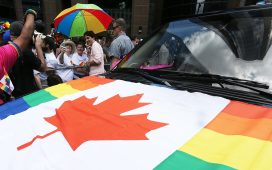