Michael Ballack admits he has sympathy for Mason Mount after he struggled against Alphonso Davies during Chelsea’s Champions League defeat to Bayern Munich on Tuesday evening.

Frank Lampard’s side face a mountain to climb in their last-16 tie as they were beaten 3-0 by the Bundesliga champions at Stamford Bridge.

Meanwhile, Davies delivered a brilliant performance on Bayern’s left flank and several Chelsea players struggled to contain the 19-year-old with his blistering pace.

Mount was one of the Chelsea players who failed to get the better of Davies but Ballack believes Chelsea were set up too deep to exploit spaces behind Bayern’s left-back.

‘He [Mount] was a bit unlucky, he was doing one versus one against Davies,’ Ballack told Chelsea TV.

‘He has phenomenal speed which you don’t just see in the Bundesliga but at international level, it’s outstanding.

‘He had two or three good runs and maybe a little bit of an advantage but he got beaten really quick.

‘But you also have to find different ways, that’s a learning process, next time he will position himself better, maybe they [the team] push up.

‘Also it’s a learning in the group as a team about positioning on the pitch better.

‘I thought most of the time they were too deep.

‘Even if you play sometimes deep, it’s not a problem to have it under control, but you have to change rhythm as well but they couldn’t do it, they couldn’t create it.’

Could Simone Biles really do the unthinkable and retire before Tokyo 2021?

The Open is off but will the Tour de France be rescheduled? 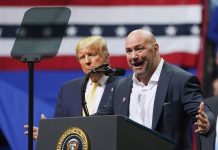