Prominent feminist organizations in the U.S. have so far remained silent on the disappearance and ongoing concern over Chinese tennis star Peng Shuai, who accused a former member of the Communist Party’s ruling Standing Committee of sexual assault.

Fox News reached out to the press offices for the National Organization for Women, Time’s Up and “me too. Movement” for comment on her disappearance and questions over her safety after she resurfaced in recent photos and videos. None of the organizations responded to the inquiries.

Fox News also examined the Twitter pages and press release pages for the groups and did not see statements on Peng.

Me Too and Time’s Up were both formed to raise awareness and support for women who have been sexually assaulted or harassed. NOW was established in 1966 and is America’s largest organization of feminists.

While the NOW, Me Too, and Time’s Up have not commented on the matter, the groups have issued recent comments on sexual assault against women in the international community and the treatment of women in the sports world.

“Women have a right to compete in sports while feeling comfortable. They should not have to suffer from the additional pressure from spectators scrutinizing every inch of their bodies,” the NOW tweeted on Nov. 8, for example.

BLACKBURN SAYS IT’S ‘UNSAFE’ FOR US ATHLETES TO GO TO BEIJING OLYMPICS: ‘DISAPPEAR YOU’

Peng went missing on Nov. 2 after she publicly accused a former Chinese government senior official, Zhang Gaoli, of forcing her to have sex despite her refusals.

FILE – China’s Shuai Peng plays a shot against Romania’s Sorana Cirstea during their first round match of the French Open tennis tournament at the Roland Garros stadium, in Paris, France. Tuesday, May 30, 2017. Chinese authorities have squelched virtually all online discussion of sexual assault accusations apparently made by the Chinese professional tennis star against a former top government official, showing how sensitive the ruling Communist Party is to such charges. (AP Photo/Michel Euler, File)

Her accusation on social media was removed within minutes and her disappearance sparked international outrage and concern aimed at the Chinese government. She resurfaced on Friday in photos circulated by an employee of Chinese state television.

FILE – Then Chinese Vice Premier Zhang Gaoli is seen during a meeting at the Great Hall of the People in Beijing, China, Wednesday, March 16, 2016. Chinese authorities have squelched virtually all online discussion of sexual assault accusations apparently made by a Chinese professional tennis star against the former top government official, showing how sensitive the ruling Communist Party is to such charges.
(AP Photo/Ng Han Guan, File)

She also had a video call with Olympic officials who claimed that she is safe.

Peng “thanked the IOC for its concern about her well-being,” the International Olympic Committee said in a statement.

But her disappearance is still facing questions. Peng is just the latest person in China to go missing after criticizing the ruling party, with some people reappearing weeks or months later with little or no explanation.

Photos of Peng posted by the China Open on the Weibo social media service Sunday also made no mention of her disappearance.

The CEO of the Women’s Tennis Association has also sounded the alarm on Peng’s safety. Steve Simon addressed video of her published by China state-run media on Saturday, saying that while it’s reassuring to see her,  the video was “insufficient” proof of her safety.

FILE – WTA Chief Executive Officer Steve Simon smiles during a retirement ceremony for Martina Hingis in Singapore on Oct. 29, 2017.  An email purportedly from a Chinese professional tennis player that a Chinese state media outlet posted on Twitter has increased concerns about her safety as the sport’s biggest stars and others abroad call for information about her well-being and whereabouts. Simon, the chairman and CEO of the Women’s Tennis Association, questioned the authenticity of the email intended for him, in which Grand Slam doubles champion Peng Shuai says she is safe and that the assault allegation is untrue. (AP Photo/Yong Teck Lim, File)

“While it is positive to see her, it remains unclear if she is free and able to make decisions and take actions on her own, without coercion or external interference. This video alone is insufficient.  As I have stated from the beginning, I remain concerned about Peng Shuai’s health and safety and that the allegation of sexual assault is being censored and swept under the rug,” he wrote.

Peng’s accusations have been held up as China’s latest “Me Too” moment, with some pointing out that such accusations are often silenced.

“The authorities have never liked feminists or #MeToo,” Lijia Zhang, the author of “Lotus,” told the New York Times, adding that those who “dared to speak out” “have been silenced.”

China is slated to hold the upcoming 2022 winter Olympics in Beijing, but the controversy surrounding Peng has sparked calls for a boycott.

“The Chinese Communist Party has no value for life. If you’re not going to toe the line, then they’re going to disappear you. And this is why we think it is unsafe for our athletes to go to the Olympics in Beijing. This is something that seems to be happening so more regularly. So why would the US Olympic Committee send our athletes into this type of environment?” Sen. Marsha Blackburn said on Fox News’ “Sunday Morning Futures” this weekend. 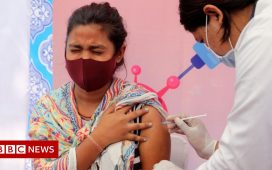 Britain and Israel to sign trade and defence deal