Winfried Kretschmann, a white-haired former biology teacher who has been the state premier of Baden-Württemberg since 2011, can look forward to this Sunday’s elections in his wealthy corner of south-west Germany with ease.

In the home state of Daimler, Porsche and Bosch, he has not just won the support of the metal and electronics industry, but that of conservative voters, 65% of whom have in surveys expressed their wish for the 72-year-old Catholic to retain his office.

Posters plastered all over the state showcase not only Kretschmann’s trademark flat-top haircut but also a robust brass neck: his campaign slogan “Sie kennen mich” (You know me) is the same folksy quip that helped Angela Merkel win a third term in 2013.

The only problem for Merkel’s party is that Kretschmann is not a member of the Christian Democratic Union (CDU), but the German Greens.

Seven months before the chancellor’s 16-year stint comes to an end with federal elections on 26 September, state votes in Baden-Württemberg and neighbouring Rhineland-Palatinate could teach the German public a surprising lesson: that they can vote for a continuation of Merkelism not just without Merkel, but also without the CDU.

Since winning the leadership mandate in Germany’s top export state in 2011, Kretschmann has pursued an ambitious agenda on biodiversity while keeping local carmakers on side with the kind of pragmatic approach usually associated with the country’s famously consensual chancellor.

As journalist Ulrich Schulte puts it in a new book on the ecological party, Kretschmann’s south-western Greens have managed to become what the CDU once used to be and what the national Green party dreams of becoming: “an indispensable political force that represents and shapes the state like no other”.

While the latest polls in Baden-Württemberg give the Green party a 10-point lead, his Christian Democrat coalition partners could on Sunday not just face a historic defeat in their former stronghold, but also the possibility of being pushed out of office in favour of a “traffic-light coalition” between the Greens, the Social Democratic party (SPD) and the pro-business Free Democrats.

Such a power-sharing arrangement is already in place in Rhineland-Palatinate, once the home turf of the late reunification chancellor Helmut Kohl but governed by centre-left premier Malu Dreyer since 2013. Here too, the Christian Democrats could be left out in the cold as a result of their polling lead having disappeared in the wake of kickback allegations over mask procurement deals and a growing frustration with a sluggish vaccination rollout overseen by CDU ministers.

For leader Armin Laschet, who has led the conservative outfit for less than two months but hopes to take Merkel’s mantle in September, the two state elections could provide a sobering reality check.

“The danger for Laschet is that his leadership qualities will come into question before he has fully settled in his job”, said Thorsten Faas, a political scientist at Berlin’s Free University.

“After the votes on Sunday there will be strategic attempts to blame the mask affair and weak candidates”, Faas said. “But one thing is quite clear: the government’s ratings, and especially those of the CDU, only shot up because of the pandemic – and now they are going down again”.

How low the hegemon of German postwar politics can fall remains the great unknown. Recent polls still show the CDU as the strongest force in the country, at roughly the same share of the vote it received in 2017.

And whether the second-placed Green party under leadership duo Annalena Baerbock and Robert Habeck can simply take its place on the national stage by copying their success story in Baden-Württemberg is questionable.

“Kretschmann provides a blueprint for stealing a march on the Christian Democratic Union among the middle-class electorate”, Schulte wrote in a recent article for ta.

“But such a cautious course of modernisation is far too slow in the face of the escalating climate crisis; it would even fall short of an orientation on the Paris agreement, the minimal goal of a Green coalition government”.

Kretschmann’s consensual approach has involved compromises that have made the more leftwing quarters of his party wince, such as a proposal for a scrappage scheme to incentivise the purchase of new diesel and petrol cars, designed to support automobile companies struggling during the pandemic.

It has also created space for the foundation of a small new ecological party, Klimaliste Baden-Württemberg, which will compete for Green seats at Sunday’s vote.

Signalling too much of Kretschmann’s flexibility in the run-up to the September vote, some Green supporters fear, could damage the party’s standing just as they limber up to play a role in the next government.

They point a warning finger at Austria, where the Greens entered a power-sharing deal with chancellor Sebastian Kurz’s conservatives in 2020 but have been outmuscled in a symbolic battle over the country’s asylum policy. Instead of becoming Germany’s next indispensable political force, the Greens could also go down in history as the conservative’s litter-bearers. 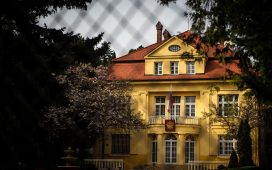