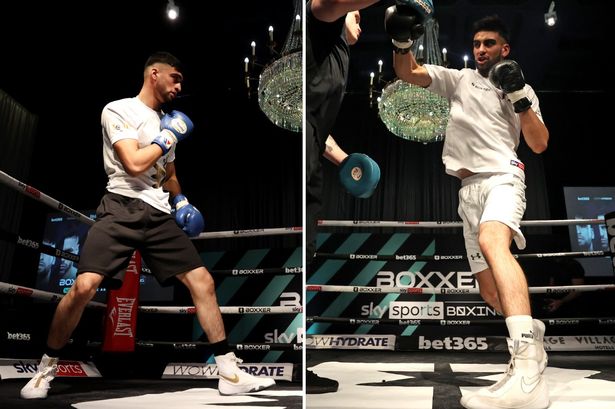 Boxing brothers Hassan and Adam Azim are embarking upon a shared journey in the professional ranks.

The talented duo have pushed each other to the limit for close to a decade and will be backed by almost 1000 fans from their hometown of Slough as they fight on the same card at the The SSE Arena, Wembley on Sky Sports tonight (Saturday).

All roads lead to the same end goal – to become the latest set of brothers to become world champions – but the pair plan to take different routes to get there.

“We’re both on this journey together and trying to push each other all the way,” Hassan says.

“But Adam’s got a different route to mine. I want to take my time in the pro game, whereas Adam wants to be the youngest world champion.”

Adam, 19, is known for his rapid hand speed and enjoyed a decorated amateur career, winning 10 national titles as well as being ranked the world’s No.1 youth amateur at welterweight.

But, after taking inspiration from the likes of Teofimo Lopez and Devin Haney, he makes no secret of his lofty ambitions after turning pro.

His trainer, Shane McGuigan, this week backed him to “transcend the sport”, labelling him an “unbelievable talent”.

“The reason I want to get up to the top quickly is because I see other fighters like Devin Haney, Teofimo Lopez, Gervonta Davis – they all started at a young age,” Adam says.

“The best thing to do in the pros, in my opinion, is start young and make something big at a young age.

“I want to become one of the youngest world champions, and now I’ve got Shane McGuigan as my trainer, I believe he’s going to turn me into something special.”

Whilst Adam is aiming for a rapid rise, Hassan, 21, is happy to take his time – just as he did getting into the sport.

Hassan Azim makes his professional debut at The SSE Arena, Wembley as both compete on the same card
(

The Azim family fell into boxing after their dad took Adam to the gym as an outlet after he was diagnosed with ADHD.

“When I was four years old, I was very hyperactive,” Adam explains. “I had ADHD and my dad decided to put me in a sport that would drain my energy and give me something to do.

“Boxing was one of the sports that was getting my anger out, and that was how it all started.”

By the time Hassan joined the gym a few years later, he had already soaked up information like a sponge.

“For years I was watching Adam train, watching him spar,” he says.

“When I was aged 12 I decided to get interested in it, did my first session, did really well and from there I’ve never stopped boxing.

“I’m the sort of person that if I watch something over and over again, I’ll learn from it.

The Slough-based brothers, pictured aged 14 and 12, grew up in the gym with Hassan (right) joining Adam (left) when he was 12

“Nobody really taught me to throw a punch, but I’d just been watching Adam for so many years that when I gave it a try and did my first spar at 12, I’d picked up a lot. It all went from there.”

From that point on, the pair found a new level of drive from competing with one another which has remained a driving force between their progress.

“It was great when Hassan came and joined me,” Adam says. “Now I had someone at the gym to talk to and having my brother there, it motivated me more. It made me push myself even harder.

“He’s always there pushing me, I’m pushing him and having a sibling there to train with is great. We want to build the stable with our names, and we want to make ourselves the best we can be.”

“To give an example,” Hassan interjects. “When we’re training on the running tracks, it’s supposed to be a light jog but Adam gets in front of me, then I want to get in front of him and we both want to beat each other.

“Just little things like that, it pushes us to the maximum to be honest and it’s great having each other, it means we never have a session off.

“When it comes to competing in the ring, there’s never competition there because we’re different weight classes, so it works quite well.”

Tonight marks a major moment for the family as the pair appear on the same bill in London.

Adam will look to build on a win on his debut last December on his long-awaited return to the ring, whilst Hassan makes his first appearance in the paid ranks.

“It’s exciting times for us,” Hassan says. “A lot of people, especially from Slough, have brought tickets and are coming down to see us fight.

“It’s really exciting for me because whenever I’m underneath the lights with people cheering my name on, I perform really well.

“To fight at the SSE Arena at Wembley for my debut, it’s a blessing and I’m just really excited for a good night.”

Both are confident they are in perfect hands as part of Shane McGuigan’s growing stable, which includes the likes of Lawrence Okolie and Daniel Dubois whilst providing Adam with priceless sparring against Luke Campbell prior to his retirement.

“It’s been very, very good,” Adam says. “I’ve seen a lot of improvements in myself, because Shane’s had me working on really specific stuff.

“I don’t want to give too much information out on how my style is because I want everyone to see on fight night.

“When I sparred Luke Campbell and saw Shane giving advice to him, I just thought, ‘wow, this is amazing’. It was a great move for me, and I believe learning from him is just going to make me a better fighter.”

“Training with Shane has been a massive thing for me as well,” Hassan adds.

“He’s a world class trainer but also training alongside world class athletes – Chris Billam Smith, Daniel Dubois, Anthony Fowler, Lawrence Okolie. Being amongst the greatest, it’s a privilege for me and I’ve learnt so much already.

“Again, I’m not saying much about my fighting skills yet but I know I’ve improved my level of fighting, as well as my fitness, strength, the whole package.

“He’s changed us a lot, and having this opportunity at such a young age, it motivates us. Shane sees something in us, he believes one day we’ll both be champions, and it’ll just be a matter of time.”

Their first appearance on the same card is just the start of what the pair hope will be an exciting and memorable journey.

It is one which neither could have envisaged when Adam was first taken to the gym by their dad simply in the quest for an outlet.

“My dad has taught me since a very young age,” Adam concludes. “I’ve done this for 12-13 years now and I didn’t expect to be at a big stage like this, yet alone with Hassan here as well.

“Now it’s time for me to shine and show everyone what I’m about, hopefully Hassan can do the same.”