NEWSCABAL > lifestyle > Meet Gremlin, the tiny cat who always has her tongue sticking out due to a deformed jaw
lifestyle

Meet Gremlin, the tiny cat who always has her tongue sticking out due to a deformed jaw


Gremlin the cat looks a little different to your average cat.

That’s due to a deformity in her jaw that means she can never fully close her mouth… causing her tongue to constantly stick out.

But it does make her look pretty cute, and has earned her thousands of fans online.

Gremlin, seven, was found in a box of kittens in a Walgreens parking lot on Little Rock, Arkansas.

‘A friend of mine brought her to my house and I instantly fell in love, she was so small, and her wonky jaw was so endearing,’ said her owner, Maureen. 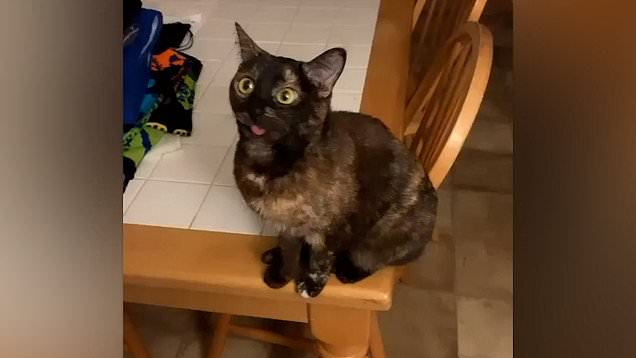 ‘The vets think she’s inbred, which causes the deformity, but it’s never affected her quality of life.’

Gremlin now lives with four other cats – Calcifer, Jiji, David, and Alexis – and is the smallest of the bunch.

Maureen said: ‘Gremlin is tiny and maxed out her growth in her first couple months.

‘She weighs about five pounds and is easily the smallest cat in my house, despite being the oldest.

‘She is the sweetest and most docile cat on the planet, she loves to cuddle and take naps, her favourite snack, which she rarely gets, is cheese dip.’

If you adore Gremlin as much as we do, you can see more of her on the cats’ Instagram and Tiktok.

Do you have a story to share or a cute pet to show off?