Gloucester back Matt Banahan has announced his intention to retire at the end of the 2020-21 season.

The Jersey-born England international, who won 16 caps, joined Gloucester in 2018 after 12 years with Bath.

Banahan, who was part of England’s 2011 World Cup squad, played all his Test rugby under ex-manager Martin Johnson.

The 6ft 7in powerhouse, who has played on the wing, centre and full-back, is seventh on the list of all-time Premiership try scorers, with 68. 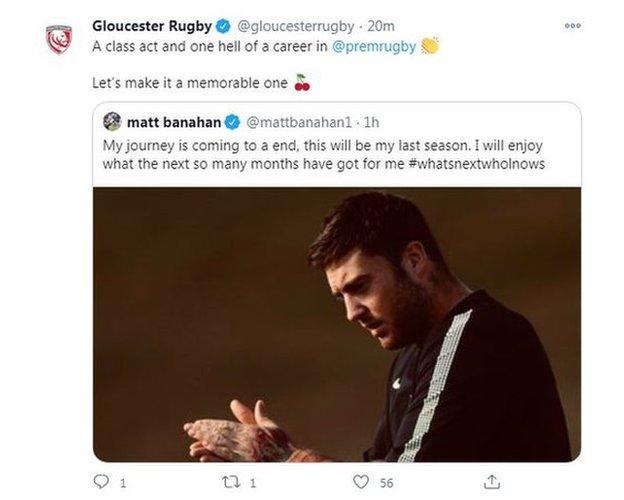 Banahan began his professional career as a lock forward in the London Irish academy.

But when he moved to The Rec in 2006, his coach Brian Ashton, Johnson’s predecessor as England boss, suggested a switch to the wing.

He was also deployed at centre by Bath, and periodically by England, scoring his fourth Test try on his first start in midfield against Samoa in November 2010 after three tries in his first four Tests on the wing. But he failed to add to his tally in his final 10 Tests.

Banahan started Gloucester’s first game of the new season last weekend, but was not used in Saturday’s win at home to Wasps.