A massive explosion has rocked the Rivers State-owned Flour Mills Company Limited located along the Industry and Harbour road in Port Harcourt City Local Government Area of the state.

The explosion at the Flour Mills was confirmed by the Rivers State Commissioner for Special Duties, Thomas Bariere, who added that no casualty was recorded.

“I can tell you on good authority that our men were on the ground. They responded immediately and the fire was put out in good time. So there is no cause for alarm.”

The explosion which occurred on Friday is said to have affected nearby buildings causing panic among residents.

Though the cause of the explosion at the flour mills could not be immediately ascertained, eyewitnesses described the sound resulting from it as ‘very loud.

One of them said though the factory has not been operational for over a year, some persons were offloading some unspecified products when he left the facility about the time the incident took place.

He said, “I left the flour mills about ten minutes when I heard the explosion. I don’t know what caused it because we came back to the place but could not get in because it was dangerous.”

The Flour Mills facility is surrounded by the Nigerian Ports Authority, Ports and Terminal Operators Limited, the Nigeria Customs Service and other business concerns. 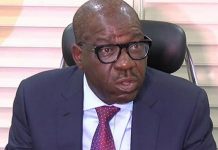