Martine McCutcheon 'in love' with Hugh Grant during Love Actually


She recently revealed she is still in touch with her Love Actually co-star Hugh Grant.

And Martine McCutcheon admitted she was ‘a little bit in love’ with him when they filmed the festive favourite from director Richard Curtis. 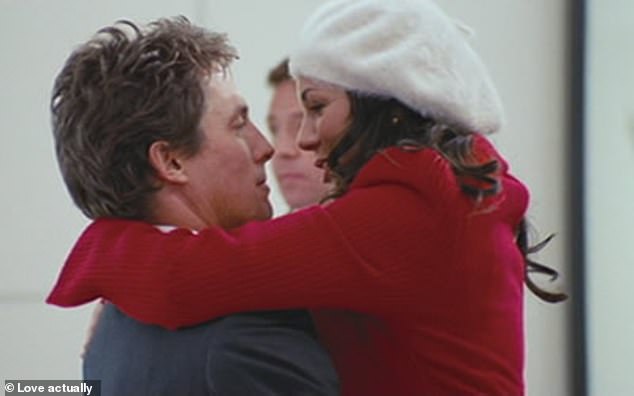 ‘I was a little bit in love with him’: Martine McCutcheon, 44, has admitted she had always had a crush on her Love Actually co-star Hugh Grant, 60

She said she was very nervous when they started filming and was thankful her co-star, 60, was so ‘gracious and kind’.

Martine said: ‘In the first scene we filmed, I had to run and straddle Hugh at the airport. I felt so insecure and was petrified I’d knock him over.

‘Hugh had always been my crush and I was a little bit in love with him. But he was so gracious, encouraging and kind, and wanted me to shine.’

While the movie is a Christmas classic for many, Martine hates watching it back because she is ‘always critical of her performance’, but her mum loves it. 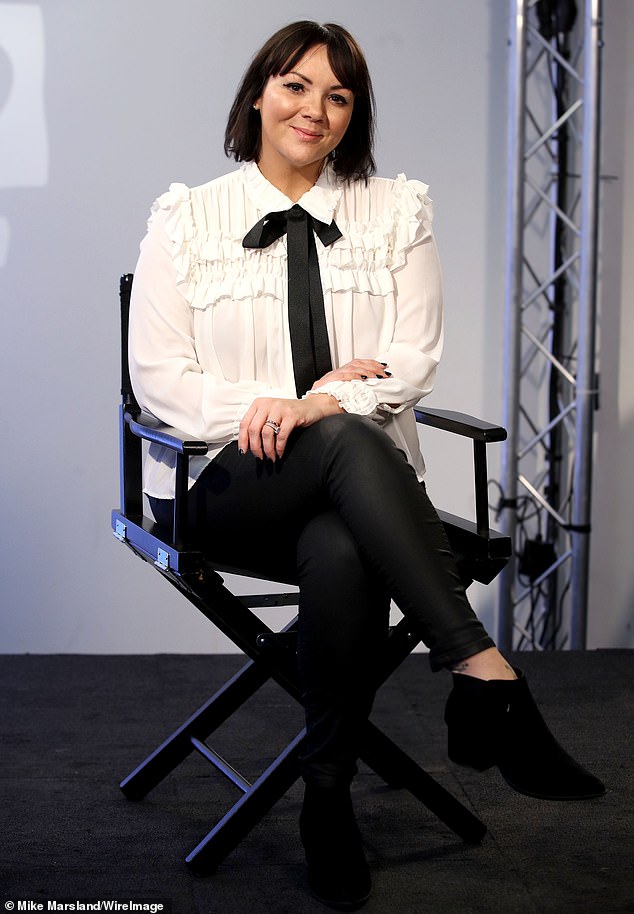 Nervous: The former EastEnders star said she was very nervous when they started filming and was thankful her co-star, 60, was so ‘gracious and kind’

The star is looking forward to her son Rafferty, five, being old enough to watch the movie.

She told HELLO! magazine: ‘I’m so proud of this film. When Rafferty grows up and has children of his own, I want them all to know its message of love is what I stand for.’

Martine is still in touch with Hugh and has been inspired by his villainous role in The Undoing to make a TV comeback. 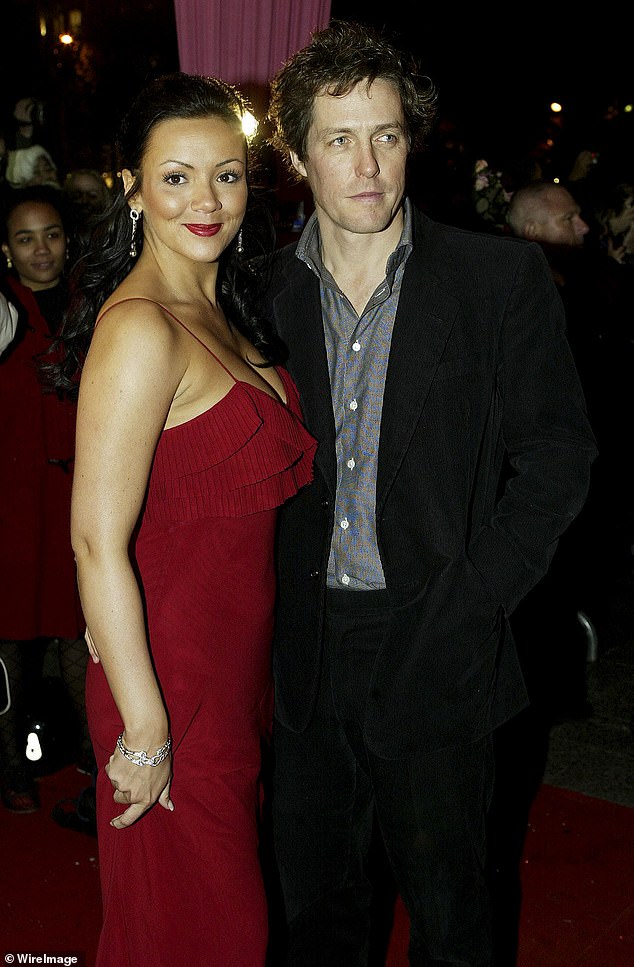 ‘We tweet and message each other’: Martine is still in touch with Love Actually co-star Hugh and has been inspired by his role in The Undoing to make a TV comeback

The actress revealed she and Hugh, who fell for each other as their characters in the romantic comedy, regularly message and she even congratulated him on his performance in the HBO thriller.

In an exclusive interview with MailOnline as part of Coca-Cola’s latest Christmas campaign earlier this month, Martine said the Hollywood actor was the happiest she’d ever seen him when they last met in person – and she believes that’s because of his home life and being a father to five children.

She said: ‘Basically he had an award given to him a couple of years ago and he asked myself and Bill Nighy to come along and support him.

‘That was the last time I actually saw him but we tweet and message each other once in a while and check in and see how we’re doing. 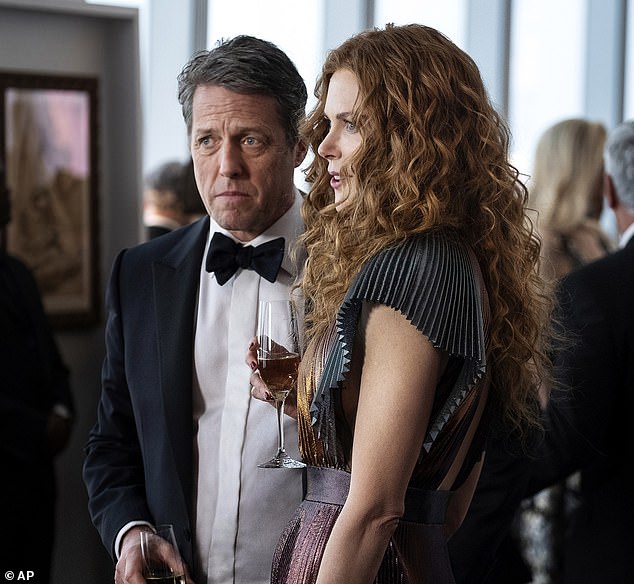 ‘I was blown away’: Hugh, who’s used to warming our hearts in films like Love Actually, Notting Hill and Bridget Jones’s Diary, played an unhinged and psychotic cancer doctor in The Undoing

‘The last time I saw him he seemed the happiest he’s ever been and it’s so lovely he’s got all his children and he’s happy and settled – you do have your real life happy endings too.’

In an interview published in October, Hugh said being a father to small children was ‘simultaneously the worst time and the best’ in his life and attempting to be a ‘young father in an old man’s body’ is ‘rough.’ 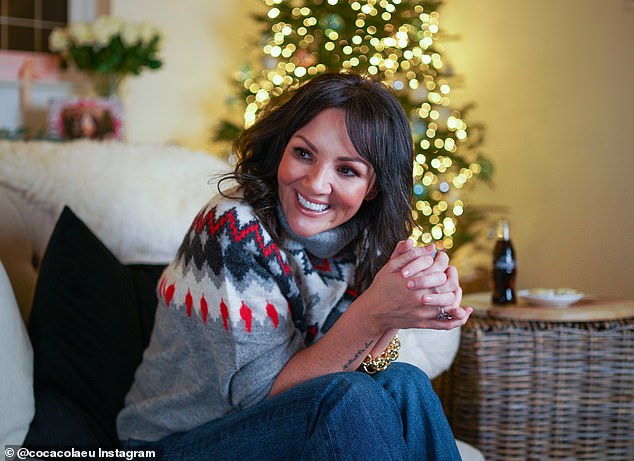 Christmassy: Martine has collaborated with Coca-Cola on their Christmas At Home With…series, which launches on the brand’s IGTV on December 14

Hugh, who’s used to warming hearts in films like Love Actually, Notting Hill and Bridget Jones’s Diary, played an unhinged and psychotic cancer doctor in miniseries The Undoing, who fooled his wife, played by Nicole Kidman, 53, into believing his innocence after he brutally murdered his secret lover.

Martine, who has collaborated with Coca-Cola on their Christmas At Home With…series, was impressed by Hugh’s transformation and how he’s gone from romcom king to an actor with serious versatility.

She said: ‘I was absolutely blown away by him and I sent him a message saying “my God, you blew me away, you have just surpassed yourself.” 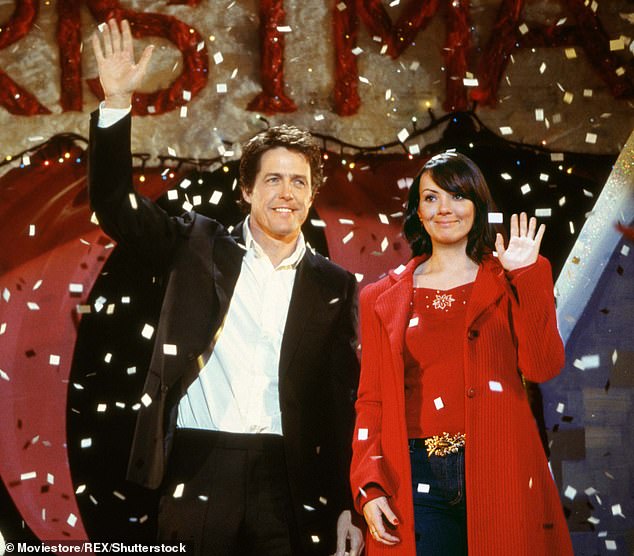 ‘I felt really proud of him’: Martine revealed she and Hugh regularly message and she congratulated him on his performance in the HBO thriller

‘He just showed how amazing an actor he can be and how versatile. I felt really proud of him.

‘I always knew he was great but it’s so fabulous he had this vehicle that he could play such a dark character and someone that fooled the audience for so long. I thought it was amazing.

‘He was the rom-com king – nobody could touch him. Now he has the chance, as he’s getting older to explore all these amazing new parts that he wouldn’t have had the chance to play before.

‘As he’s getting more distinguished he has the chance to be really more versatile, which is great and I’m really proud of him.’ 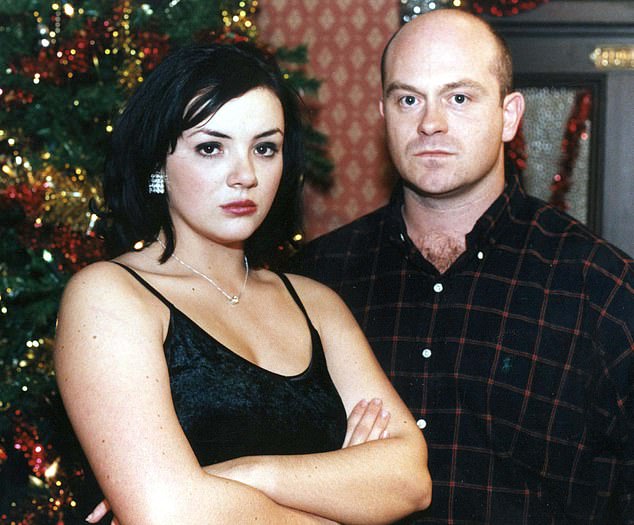 ‘It would be weird’: Martine, famed for playing Tiffany Mitchell in EastEnders, has ruled out returning to Albert Square, admitting bosses are unlikely to bring Tiffany back from the dead

Martine, famed for playing Tiffany Mitchell in EastEnders, has ruled out ever returning to Albert Square, admitting soap bosses are unlikely to bring her character back from dead like they did with Dirty Den in 2003.

She said: ‘Sometimes it’s really good to go out with a bang and literally that is what Tiffany did!

‘It’s such an exciting thing to be part of and it’s so sensational the way the character left the show that I don’t think much could top it and I feel like I had such an amazing time. It was a different time for TV then. If I went back now – it would be weird.

‘It gave me the most phenomenal start not just because of the name and the audience it gave me but it’s the discipline it gives you.

‘I have toured the world, I have been in films but 22 scenes a day and constant rewrites and changes – if you can do that then you can pretty much do anything.’ 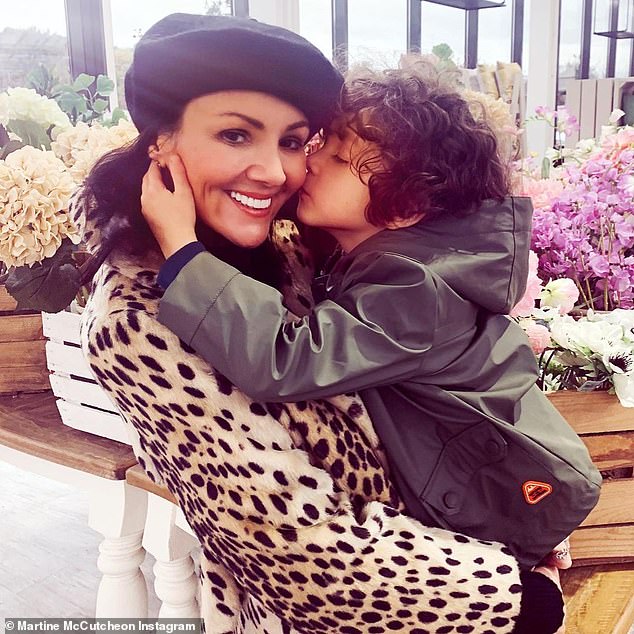 ‘I am starting to love working again’: Martine, who’s a mum to Rafferty, who she shares with husband Jack McManus, said she would be happy to return to TV should the right role come up

Martine is a mum to Rafferty, five, who she shares with musician husband Jack McManus. After taking a break from acting to focus on parenthood, she is considering a return to TV now that her son is growing up.

Martine said: ‘Now he’s older and has a routine I am starting to love working again. Should the right role come up – 100 per cent and musical theatre too.

‘It took me quite a while to have Rafferty and having him was such a massive accomplishment for me and I really wanted to spend time at home and enjoy him and motherhood because I yearned for it for so long.

‘As a working mum I’m always so busy and as a typical mum I always feel guilty that I’m not with him 24/7. He loves music, he’s like his dad who’s a music producer and songwriter and has a studio at home – he loves it.’ 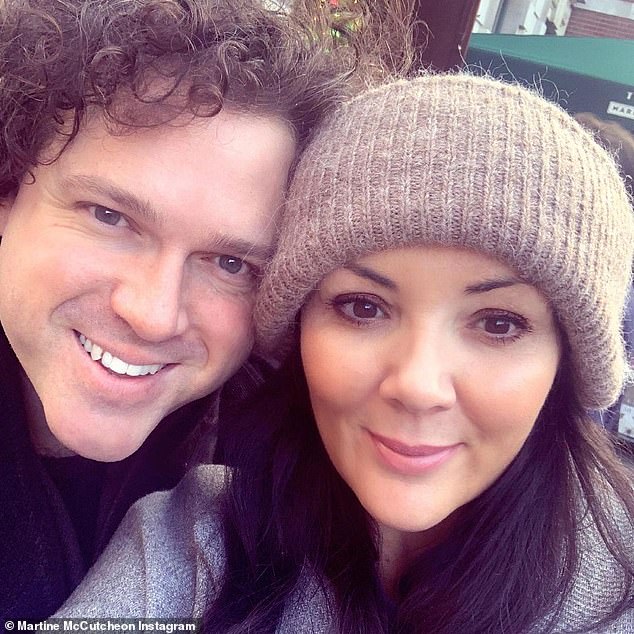 ‘As a typical mum I always feel guilty’: Martine said it took her a ‘while’ to have son Rafferty and she wanted to dedicate her time to him after ‘yearning for motherhood for so long’ 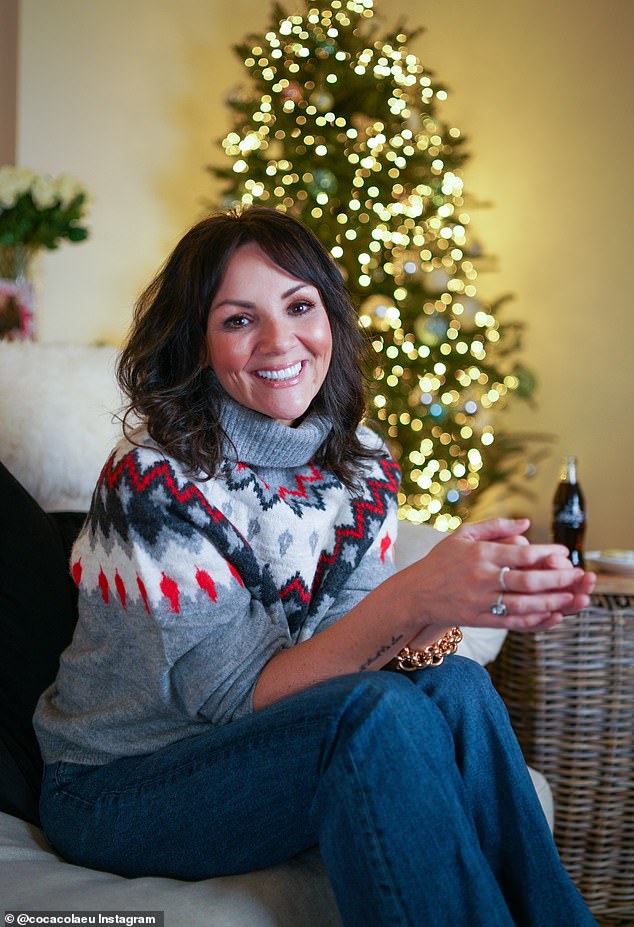 Gorgeous: Martine is working with Coca-Cola, who have filmed with a host of celebs at their homes this Christmas, in celebration of moments that make the festive season extra special

Martine is working with Coca-Cola, who have filmed with a host of celebrities at their homes this Christmas, in celebration of moments that make the festive season extra special.

She explained: ‘It was really kind of them to get in touch and just say “listen, we really want to get an exclusive glimpse with celebrities and their Christmas traditions direct from their own homes,” it just feels very intimate and everyone has been at home so it feels more fitting. I said I would love to.

‘It is always really exciting for me whenever I see the Coca-Cola advert I know the holidays are coming and I get that Christmassy feeling.

‘At this time of year we do associate Coca-Cola with that feel good, festive feeling and that advert and I just think it’s really lovely, it’s been 100 years since it first ever started – I can’t believe it.

‘It feels like a tradition, it feels like it’s part of your DNA and history, it makes you feel comforted. I thought it was a really nice fit when they asked me to get involved. We just want people to enjoy some memories with us.’ 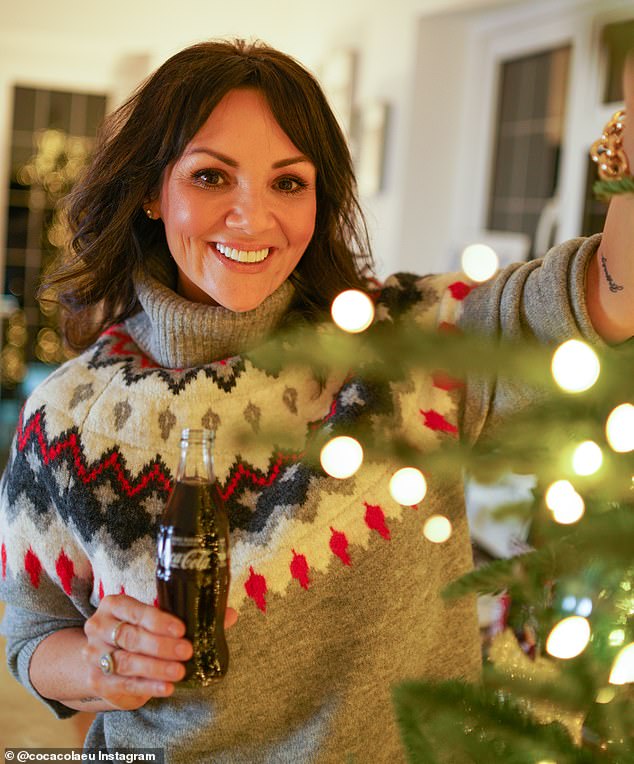 Sentimental: Martine said the Coca-Cola Holidays are Coming ad makes her feel ‘excited’ and ready for Christmas, as she shared her most loved festive memories with the brand 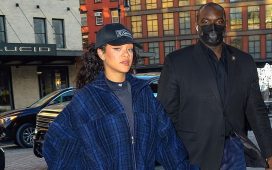 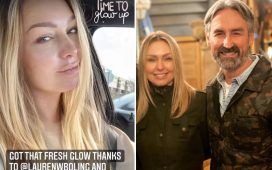 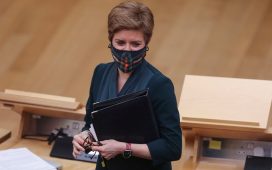 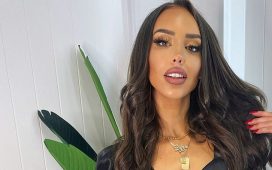 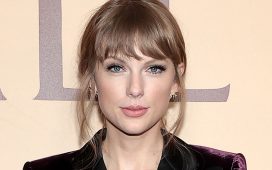