Jadon Sancho’s team has reiterated to Borussia Dortmund he does not intend to push for a January transfer, reports say.

The forward’s future is a hot topic at the moment, with Manchester United eager to make a formal offer for Sancho in the winter window.

The Athletic claim the building transfer speculation prompted Dortmund to reach out to Sancho and his team again about his intentions in January.

Sancho told Dortmund last summer he was not interested in switching clubs mid-way through the season.

That stance was reiterated to Dortmund again while he was on international duty with England.

Sancho’s plan is to stay at Dortmund for the entire campaign and decide on his future in the summer, despite feeling he has been ‘humiliated’ by his club in recent months.

The 19-year-old was hooked from Dortmund’s game against Bayern Munich after 36 minutes before he left to link up with England this month.

That humiliation followed the club’s decision to fine Sancho after he returned late from his previous spell at the England camp.

Sancho feels he is being scapegoated by Dortmund, but the current tension has not changed his mind about a January switch.

Barcelona, Liverpool, United and Real Madrid are the four main contenders to sign Sancho next summer.

The goalscorer is yet to indicate who out of the four clubs he would prefer to join.

Despite the unrest at Dortmund, Sancho rescued his side from another dismal result against Paderborn last Friday.

Sancho scored the goal which started a fightback from 3-0 down and then set Marco Reus up in injury time to grab an equaliser. 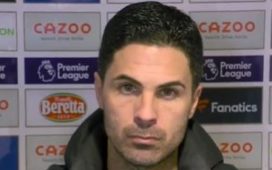