It is the statistic that undermines the good that Manchester United have done in this season’s Premier League. They have failed to score a single goal in open play against opponents from the so-called big six.

Their only return in what is now seven attempts came from Bruno Fernandes’s penalty in the 6-1 home defeat against Tottenham. This was their fifth 0-0 draw and, although it was more watchable than some of the others, it illustrated why they lag so far behind the leaders, Manchester City. In the decisive matches, they have not only mislaid their creativity and cutting edge, they have seemed risk averse.

The draw did extend United’s club record unbeaten top-flight away sequence to 20 matches and, more importantly, it kept them six points above fifth-placed Chelsea. A Champions League finish is the most likely prize for United’s endeavours in the league. It remains well within their grasp. Chelsea could be the unhappier at the result, although it continued Thomas Tuchel’s unbeaten start to life at the club. His run now stands at nine games in all competitions, with six wins and only two goals conceded.

The problem for the new manager has been in front of goal. His team are not scoring enough because they are not creating enough. Hakim Ziyech was denied by David De Gea in the 48th minute when he should have scored and it was difficult to remember anything else of clear-cut note for them. Tuchel has a wealth of attacking talent in his squad but he cannot accommodate all of it and nor has he been able to find the right combinations. It feels as though the emphasis for him so far has been on forcing mistakes from the opposition high up the pitch rather than crafting openings in a more proactive way. One thing is clear: it has not been thrilling.

Tuchel made a switch from 3-4-2-1 to 3-4-1-2 when he replaced Olivier Giroud with Christian Pulisic on 65 minutes and his reason for doing so was revealing. “We defended with two strikers to block them so that they cannot enter with the ball,” Tuchel said.

The big talking point came in the tenth minute when the referee, Stuart Attwell, chose not to award United a penalty despite his video assistant suggesting he review an incident in which Callum Hudson-Odoi appeared to handle. United were incensed, with Ole Gunnar Solskjaer muttering darkly afterwards about Attwell’s motivation for not reversing his original decision and the pressure he believed had been brought to bear on the official by Chelsea.

Mason Greenwood challenged for the ball after Edouard Mendy had beaten away a swerving Marcus Rashford free-kick, leaning towards it with his shoulder and, at that point, Hudson-Odoi appeared to nudge it away with his hand. Attwell went to the pitchside monitor and it felt as though the penalty was inevitable. Not so.

United’s strategy was also to win the ball in the final third and it was noticeable how high Solskjaer asked his front four to press. The visitors were determined not to allow Chelsea to hog possession and dictate the tempo. It was extremely tactical; systems and ideals over individual match-ups with no one forward-thinking player leaving much of a mark. That said, the tempo was consistently high and the players’ technical ability in tight spaces and with little time was tested. Defensively, the levels were i mpressive; the strength and decision-making beyond reproach by players on both sides.

Tuchel gave starting opportunities to a trio of players that he has not yet counted on in the league – Ben Chilwell, N’Golo Kante and Ziyech – and his team’s best moment before the interval came when Antonio Rudiger switched the play with a long diagonal from left to right for Hudson-Odoi. His whipped cross was just in front of Giroud. Ziyech also shot at De Gea while Hudson-Odoi lashed off target.

Hudson-Odoi did not reappear for the second-half – he was spotted with a strapping on his knee – and Ziyech’s golden chance came when Chiwell’s low cut-back came through to him. The connection was clean but De Gea, who was moving in the opposite direction, threw back a strong hand to save. Ziyech needed to pick out a corner. On the rebound, Hudson-Odoi’s replacement, Reece James, saw his shot blocked by Luke Shaw.

It was clear that one moment or one error would likely be decisive. Could either team force it? United were slightly more threatening in the second-half, with the off-colour Bruno Fernandes missing a pass to Rashford on the counter; Greenwood whipping a shot too high; Scott McTominay shooting at Mendy and Fred curling just past the angle of post and crossbar.

Mason Mount had one darting run for Chelsea which ended when McTominay made a challenge but it was a day when excitement was in short supply. 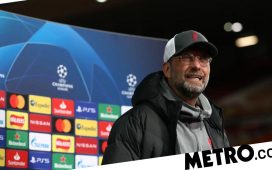