The footballer, 30, popped the question on Monday during the couple’s luxury trip to Mykonos with their family and friends

Blonde beauty Taylor, 23, announced the happy news on Instagram sharing two loved-up snaps of the couple and gushing: ‘Here’s to a lifetime of us.’ 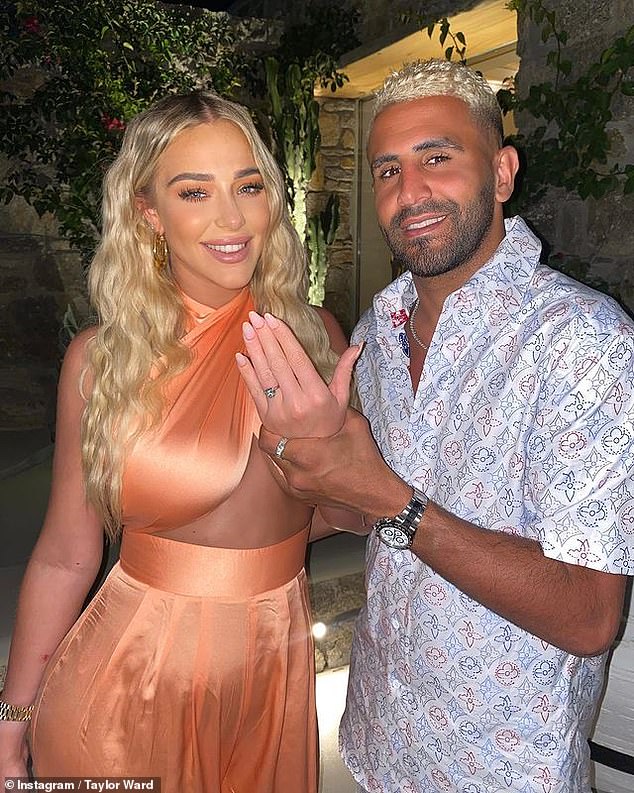 Popped the question! Manchester City star Riyad Mahrez is engaged to his girlfriend of 16 months, Taylor Ward, after proposing during their trip to Mykonos on Monday

Taylor penned: ‘There’s no one I’d rather do this life with, here’s to a lifetime of us.

‘Can’t wait to grow old together, btw I said YES! I Love You.’

The bride-to-be, who is the daughter of Real Housewives Of Cheshire star Dawn Ward, 47, and retired footballer Ashley Ward, 50, looked sensational in the snaps.

Taylor donned a cut-out orange jumpsuit which flashed her taut midriff and ensured to show off her glistening diamond ring in the beaming images. 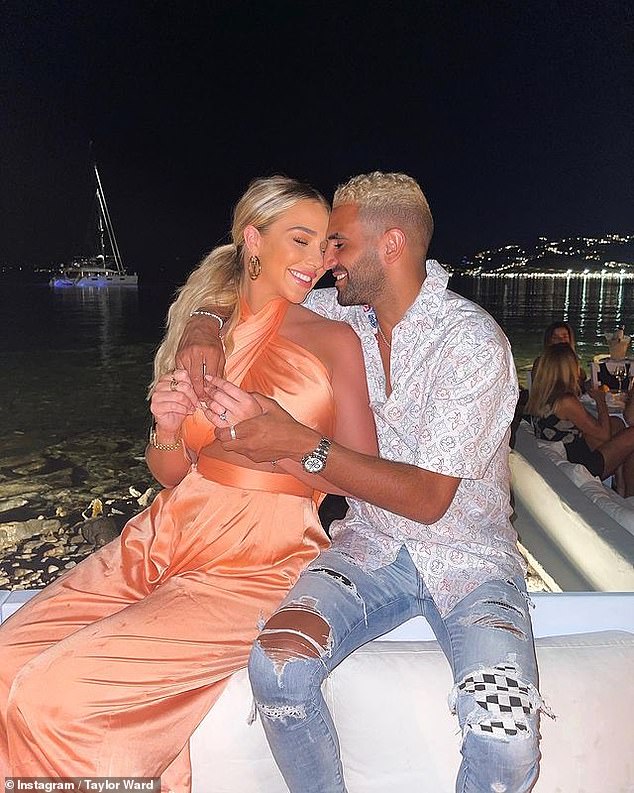 Happy couple: Taylor, 23, announced the news on Instagram sharing two loved-up snaps of the couple and gushing: ‘Here’s to a lifetime of us’

Engaged: The beauty, who is the daughter of Real Housewives Of Cheshire star Dawn Ward and retired footballer Ashley, could not hide her excitement as she posted the snaps online

It is thought that winger Riyad, who was previously married for six years to Rita Johal and shares two daughters with his ex-wife, proposed after lunch on Monday.

A source told The Sun that Riyad went all out picking the perfect engagement ring for Taylor and had the £400,000 sparkler custom made.

They said: ‘Taylor was not expecting this at all, and was utterly over the moon. Riyad chose the ring himself and had it specially made.

‘There was a massive, champagne-fuelled celebration party afterwards.’

Taylor’s celebrity pals were quick to send their well-wishes in the comments, with Lottie Tomlinson, Kady McDermott and Rachel Fenton all saying congratulations. 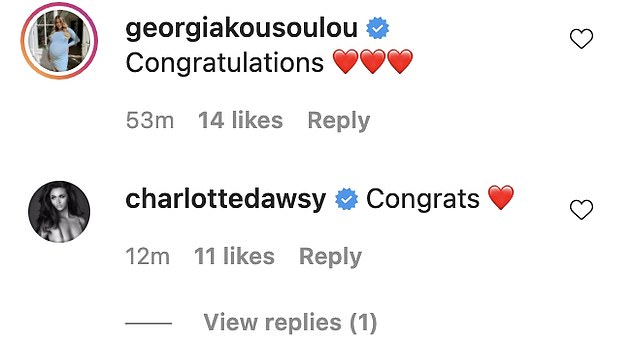 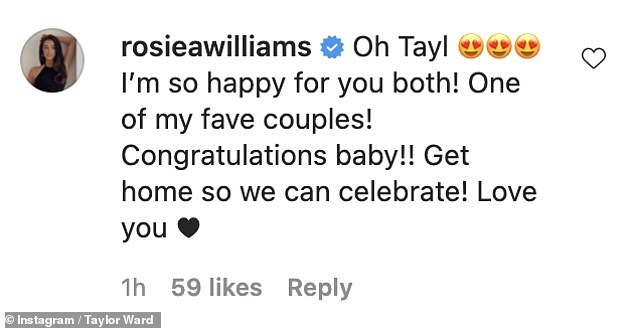 Congratulations! A host of Taylor’s celebrity pals sent their well wishes in the comments

Love Island’s Rosie Williams also penned: ‘Oh Tayl I’m so happy for you both! One of my fave couples! Congratulations baby!! Get home so we can celebrate! Love you.’

Taylor and Riyad are currently soaking up the sunshine in Mykonos after flying in on a private jet with their pals and her mum Dawn.

Greece and its islands are currently on the UK’s amber list of travel destinations, and upon returning you must isolate for 10 days or pay for a test to be released after five.

It is thought that the duo have been living together in a £2million Cheshire mansion since the beginning of 2021 after Taylor moved into his luxury flat last December. 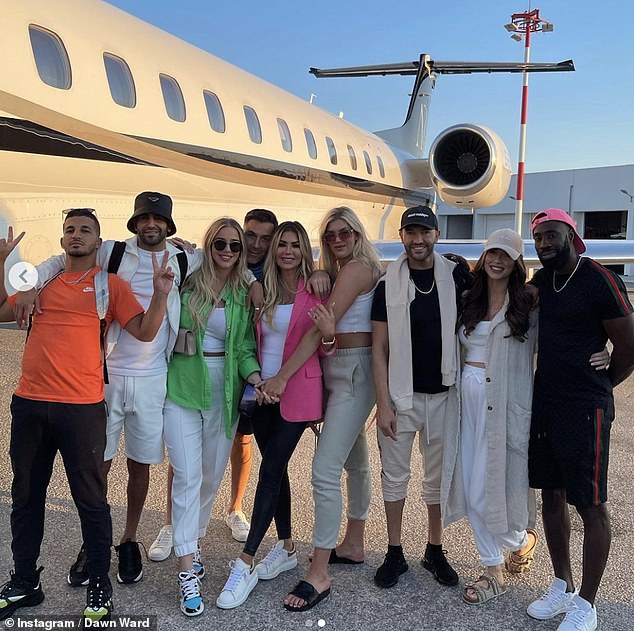 Living the life: Taylor and Riyad are currently soaking up the sunshine in Mykonos after flying in on a private jet with their pals and her mum Dawn 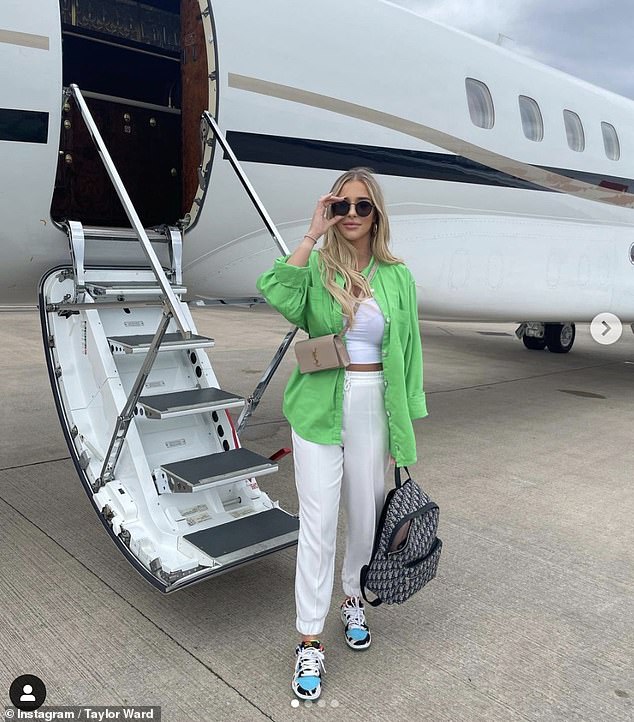 Stunning: Taylor has been keeping fans updated with their luxury break to the Greek island

Taylor finally made her relationship with Riyad Instagram official back in October, eight months after it was first reported that the pair were dating.

See also  Selena Gomez is getting into the beauty industry as she files trademark for cosmetics, skin and hair

The pair were first said to be dating in February 2020 after the sportsman ended his marriage to ex-model Rita.

Taking to Instagram, Taylor shared a loved-up snap with father-of-two Riyad as the beaming couple enjoyed a dinner date.

She sweetly captioned the snap with ‘Me & U,’ with a heart emoji, while the footballer shared the photo to his Instagram Story.

Taylor and Riyad were first liked in February when it was claimed they had been on a string of dates after the sportsman ended his marriage to ex-model Rita.

The source also claimed that Taylor – who was previously linked to Riyad’s teammate Sergio Ageuro – refused to pursue a romance until she knew his marriage was over.

A source told The Sun On Sunday: ‘They’ve been friends for a while but Taylor refused to go there romantically until she knew his marriage was over. She is very much a girls’ girl and would never break that code.’

MailOnline contacted representatives for Riyad Mahrez, Rita Johal and Taylor Ward for comment at the time. 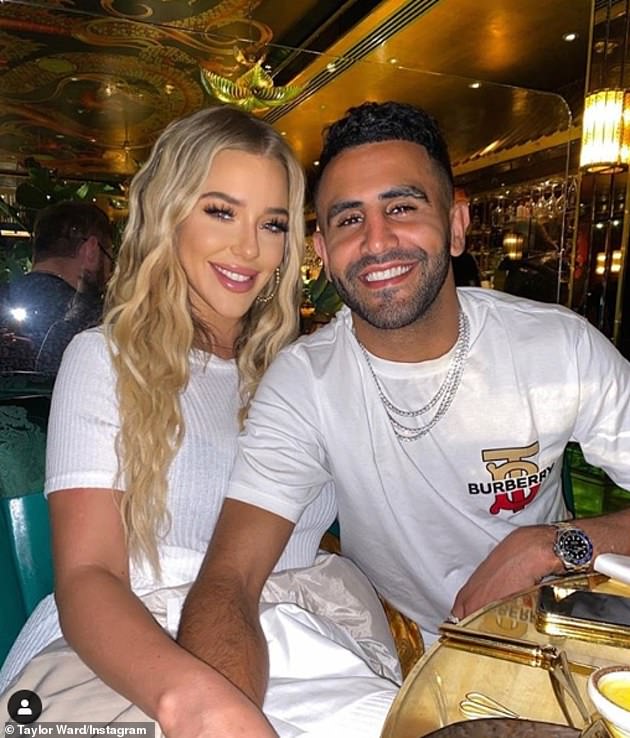 It’s official! Back in October, Taylor went Instagram official with the professional footballer, after eight months of speculation

Last year, it was claimed Taylor had been dating Riyad’s teammate Aguero, after he split from wife Gianna in 2012.

A source told The Sun at the time: ‘About two weeks ago they went for a spa day together. And they were on a pal’s Instagram too before Christmas.’

Taylor’s dad Ashley is also a former footballer who retired from the sport in 2005 and the family live in a £15 million Cheshire mansion.

Riyad tied the knot with wife Rita in 2015 and they share two daughters. 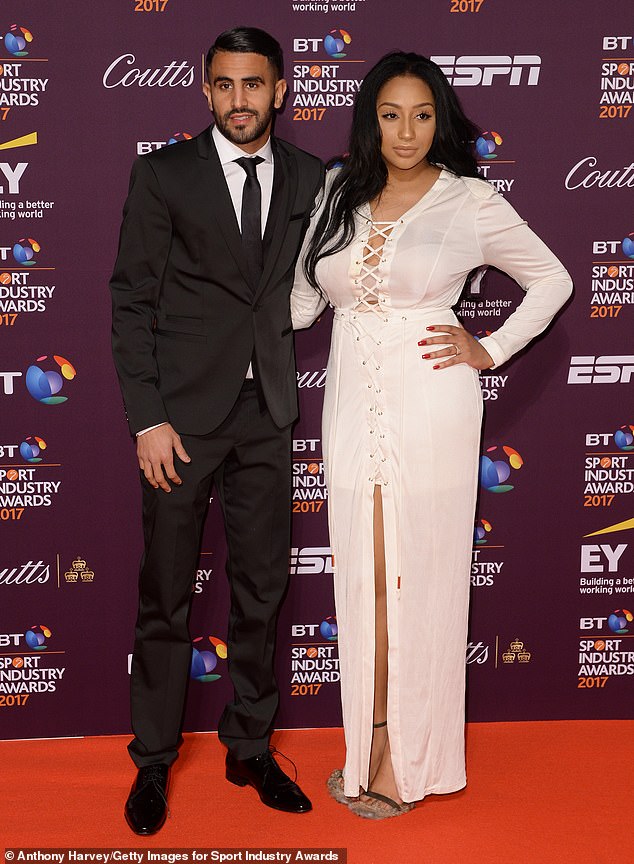 Over: It was claimed previously that Riyad had been on a string of dates with Taylor after ending his marriage to ex-model Rita (pictured in 2017) 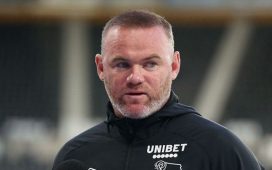 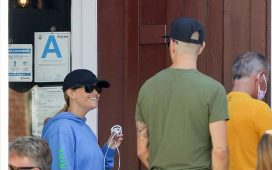 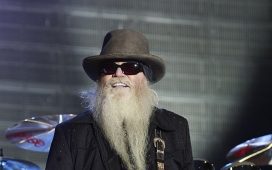 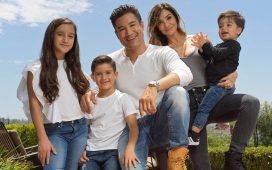 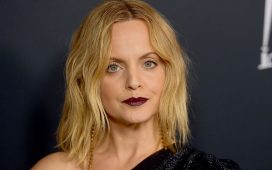 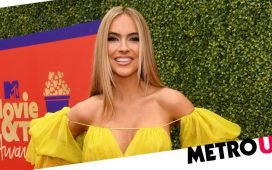