Man Utd have been given a boost in bringing Erik ten Hag to Old Trafford after the Ajax boss declared he is ready for the next step.

He said: “I think I’m ready for it [to move to a top foreign club].

“I would be happy to take up that challenge.

“But I think I have sufficient competences to take on that challenge.”

Meanwhile, Ole Gunnar Solskjaer told fans ‘I tried my best’ after a chance encounter with a group of supporters at a sushi takeaway.

Since getting his P45, Solskjaer has made the most of his extra free time and treated himself to some Japanese grub from a nearby Cheshire spot last Wednesday.

And the Athletic claims United-supporting diners thanked him for his efforts during his three years in charge at Old Trafford.

As he collected his food, Solskjaer waved to the fans and said: “I tried my best. Thanks, lads.”

Finally, Gerhard Struber has turned down United as their search for an assistant for Ralf Rangnick goes on.

SunSport understands Struber has decided to stay with New York Red Bulls as he does not want to drop down from head coach to assistant.

Struber told Austrian Sky Sports: “There has been a request.

“At the same time I have in New York, which also makes me look very hopefully into the future and therefore I do not want to give up with New York overnight.

“I have a longer-term contract there and still have a lot of goals with an ambitious team.” 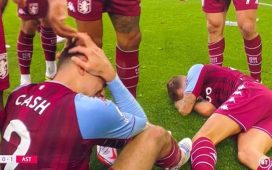