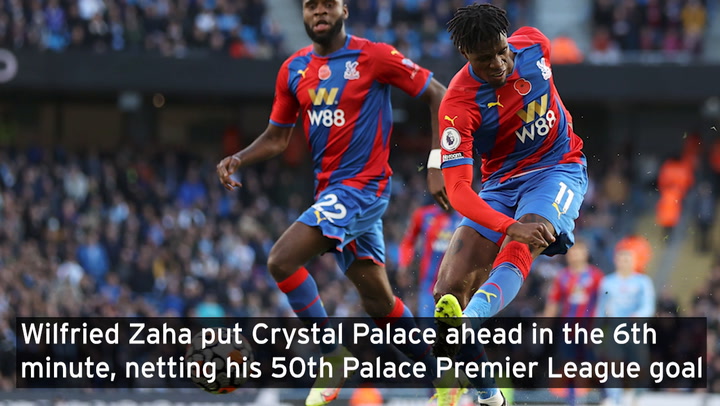 Manchester City suffered their first home defeat of the season with a 2-0 loss against Crystal Palace, in what was a poor performance from Pep Guardiola’s side.

Patrick Vieira’s Palace took the lead through Wilfried Zaha’s strike, before Aymeric Laporte was shown a straight red card after he was adjudged to be the last defender when he brought down Zaha in first-half stoppage time.

Loanee Conor Gallagher added a second for Palace two minutes before the end to ensure the Eagles headed back to south London with all three points.

Speaking after the game, Guardiola felt Laporte’s red card could have gone either way and said it ultimately cost his side the match.

“It could be a yellow card or red card, depends on decision of the boss, the referee,” he said.

“The goal disallowed I didn’t see it but imagine the line said offside but we didn’t lose for that. Against Brighton the line said (their goal) was offside but that stood. We conceded the first goal and after we worked really well but after played 10 against 11.

“We need to do everything right but the players showed character. Unfortunately it went wrong in many many things.”

But Guardiola did give Palace credit for their resolute performance which kept City at bay.

“We conceded the goal early on so how many chances they had?,” he added. “The goal and no more. It is quite similar to the last seasons when Crystal Palace came here under Roy Hodgson, lost one and drew one.

“The keeper took the momentum and then long balls and they defended really well with solidarity and defend the gaps and block the shots.

Will Grealish come good for Man City? Let us know in the comments section.

Grealish joined City from Aston Villa for £100million in the summer

“We didn’t have many chances in the first half but we had enough to score. At the end the counter-attack anything can happen.”

And it was another ineffective display from £100million signing Jack Grealish, who has, for the most part, struggled since joining City from Aston Villa this summer.

Grealish had chances to pick the all-important key pass for City when they were on the counterattack, but the 26-year-old failed to choose the right option a few times throughout the game.

Such problems were not an issue at Villa, where Grealish often provided the decisive ball to team-mates which created an opening for his former employers.

The England midfielder was substituted in the 79th, bringing an end to a less-than impressive day for the British record signing.

Pep Guardiola’s were disappointing against Palace

Of course, it’s still early days in Grealish’s career with the Premier League champions, but both he, and City fans would have been hoping for a better start.

Grealish has shown glimpses of what he is capable of for City, but not on a consistent basis.

The 26-year-old made a dream start to life at the Etihad Stadium with a debut goal, before providing an assist for Gabriel Jesus in the game against Arsenal in August.

Grealish then had his best display in a City shirt to date in the 6-3 Champions League win over Red Bull Leipzig in September, where he provided an assist for Nathan Ake and then later got on the scoresheet himself.

Both Grealish and City will be hoping to bounce back when they play host to Belgian champions Club Brugge in the Champions League on Wednesday.