Emmanuel Macron’s hopes of being re-elected president may be driving the diplomatic row with France over post-Brexit access to Britain’s fishing waters, the UK’s environment secretary has claimed.

George Eustice accused Paris of using “inflammatory” rhetoric in an escalating dispute over a shortfall in licences for French fishing vessels seeking to operate in the coastal waters of the UK and Jersey.

Macron, who has been France’s president since 2017, is facing a difficult election in April and votes in coastal communities will be hard-fought in the coming presidential campaign.

“I don’t know, but there obviously is an election coming up in France, it may be that is a factor in this,” Eustice told BBC Radio 4’s Today programme.

France has said that unless further permits are issued to its fishers it will from next Tuesday clog up British exports into the EU with red tape, block UK trawlers from landing in its ports and potentially reduce the nuclear energy supply to Britain and Jersey from sub-sea cables.

On Thursday, the foreign secretary, Liz Truss, said she had instructed her Europe minister to summon France’s ambassador to the UK, Catherine Colonna, “to explain the disappointing and disproportionate threats made against the UK and Channel Islands”.

Two Royal Navy patrol boats are also understood to be on a state of “high readiness” because of the threat of angry French fishers seeking to blockade Jersey’s main port, St Helier.

During media appearances on Friday morning, Eustice, a longtime backer of Brexit, said France could expect retaliation if it followed through on its threats.

“That is completely inflammatory and is the wrong way to go about things,” he said of the measures announced by France this week. “Two can play at that game … It’s always open to us to increase the enforcement we do on French vessels, to board more of them if that’s what they’re doing to our vessels – there are other administrative things we can require of vessels.”

Asked if the government could block French vessels landing their catches in the UK, the minister responded: “If the French obviously do continue with this, then yes, we will take a proportionate response to that.”

The scallop vessel Cornelis Gert Jan was caught up in the diplomatic storm, and ordered to divert to the port of Le Havre on Wednesday after the French authorities said it was fishing in French waters without a licence.

Cyrille Fournier, the deputy prosecutor of Le Havre, where the boat was seized, said its captain had been asked to appear in court on 11 August 2022 on criminal charges.

“The captain of the ship Cornelis Gert Jan has been summoned by Maritime Gendarmerie to appear at the criminal court of Le Havre on August 11, 2022, to be judged on unauthorised sea fishing in French waters by a third party vessel to the European Union,” he said.

The owner of the Cornelis, Macduff Shellfish, said the vessel had been fishing legally in French waters, but slipped off a list due to a clerical error, and called on the government to protect the rights of British fishers.

Earlier this week, the commission said the UK government had approved 15 out of 47 applications for French boats to operate in the UK’s coastal waters. A further 15 applications were being considered where evidence of activity in those waters was limited, but 17 applications had been withdrawn by French applicants because of “poor evidence”.

Of greater concern to the French authorities, however, is that 55 boats applying to fish in the waters off Jersey have been turned down by the island’s government due to lack of evidence that they have fished there for ten days in any of the last three years.

Eustice said: “There’s a small number of 55 that just in the cold light of day have not really been accessing Jersey waters, they’ve been unable to demonstrate through any of the usual data forms that sort of positional data, chart data, manual logs.” 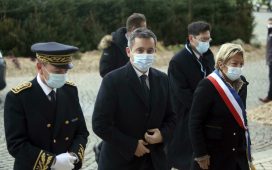