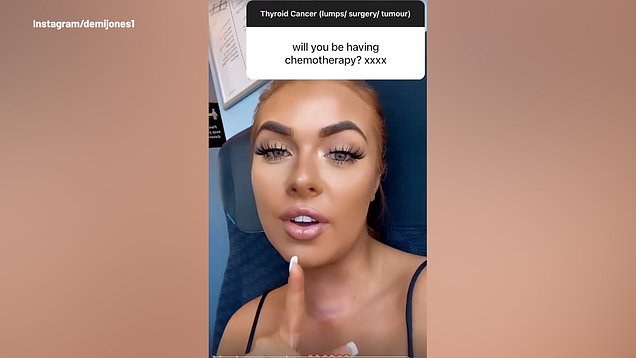 Love Island star Demi Jones doesn’t know yet if she is cancer-free, after having surgery to remove her thyroid.

The 22-year-old was diagnosed with thyroid cancer in May after undergoing surgery to remove a golf ball-sized lump from her neck.

She has since had surgery to remove her thyroid in the hopes of removing the cancer.

While on a train journey today, the reality star held a Q&A on her Instagram stories about her cancer journey, and told fans that she needs to get further treatment.

When one fan asked if she was getting chemotherapy, Demi said: ‘I’m fortunate enough not to go through chemotherapy. I’ve had my surgery. to remove the thyroid and I’m going to have some further iodine treatment.’

She continued: ‘I haven’t been told that I’m cancer free yet. I’m not actually sure if it’s completely gone or completely not gone yet. I’ve got to have some further iodine treatment in about six weeks time and some scans but hopefully by the end of the year I’ll know whether I’m cancer free.’

Demi shared that she first discovered the lump in her neck in 2019, but ‘but ignored it because I was at university and I was really stressed out about my exams’, adding: ‘I eventually got it checked just before Love Island which was brushed off.’

She had no symptoms apart from the lump itself, and said it was completely painless and ‘kind of felt like an Adam’s apple’, which moved up and down when she swallowed.

However, when she had it removed, it was the size of a golf ball.

Demi thanked fans for their kind words and said: ‘The support has been so overwhelming, but it is hard especially when I’m caught socialising with my friends and I’m drinking and people are coming up to me and asking me about my cancer, it can make me quite emotional.

‘But I’m being super strong and super positive and I’ll get through it.’

Speaking to Metro.co.uk prior to her diagnosis, Demi urged young people not to delay getting lumps checked, saying: ‘I actually noticed the lump in January 2019. It was my third year at uni and it was while I was writing my dissertation and exams so that just engulfed my life.

‘Then six months later once I’d finished and had my degree, I mentioned it to my mum and she went into panic mode and was like, “What the hell? Why haven’t you said anything?” Went straight to the doctors and apparently it’s very common – 1 in 3 women have a thyroid nodule but they said it looks good, we’re sure it’ll be fine.’

In January 2020, Demi entered the Love Island villa for the winter edition, and after shooting to fame on the show, she began working with brands like Missguided. However, later in the year, she noticed that the lump had grown.

Her father’s own cancer battle pushed her to get the lump checked again.

She said: ‘When you’re a young girl you’re more worried about boys and going out with your friends than checking for lumps and bumps, but it’s only because it’s something prominent on my neck that I knew it was an issue and unfortunately my dad had a lump and he developed cancer so I knew you need to keep a check on these things.’

Demi shot to fame after entering the Love Island villa during last year’s winter series, and dated Luke Mabbott after leaving the villa.


MORE : Fast and Furious 9 review: Vin Diesel and co take on space in delayed sequel and it’s definitely worth the wait


MORE : Sir Elton John going out with a bang as he announces final Farewell Yellow Brick Road tour shows for 2022 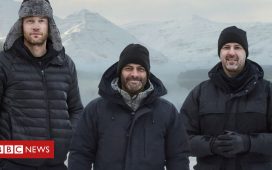 Top Gear production to move to Bristol from 2022 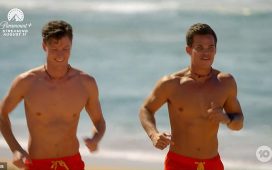 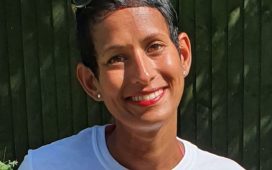 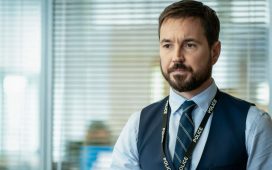 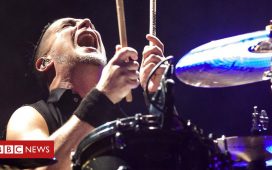