Lynagh, the son of former Australia captain and fly-half Michael, only made his Premiership debut in October.

Lynagh did not start a game for Quins this season until 26 December, but in his 11 appearances for the club he scored six tries – three of them in the last two games in the play-offs.

“He’s his own man. Michael’s an amazing dad to him, but he’s definitely his own man forging his own reputation,” added Millard.

“He did really well, because first half he had a little blunder when he put his foot in touch, and for a young kid to be so mentally resilient and get his head back on track and do what he did, he was immense today.”

Father Michael won 72 caps for Australia, helped them lift the 1991 World Cup at Twickenham, and spent some time at Saracens towards the end of his career.

Lynagh junior has been on Harlequins’ books since he was 13 and says he was overjoyed that his father could watch him win the title from the sidelines.

“To win it here, just across the road form where we play, with all my family here, I don’t know how to express it, but I hope there’s many more to come after this,” he told BT Sport.

“My brothers and my girlfriend said he was crying, I don’t think he’d do it in front of me,” he added.

“It’s all I’ve really wanted for my whole life, and to hear that he’s crying, I saw him cheering for me when I was down there.

“He’s my biggest fan and I’m so happy I could do this for him.” 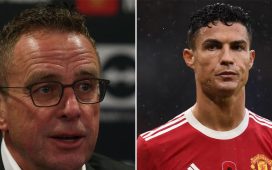