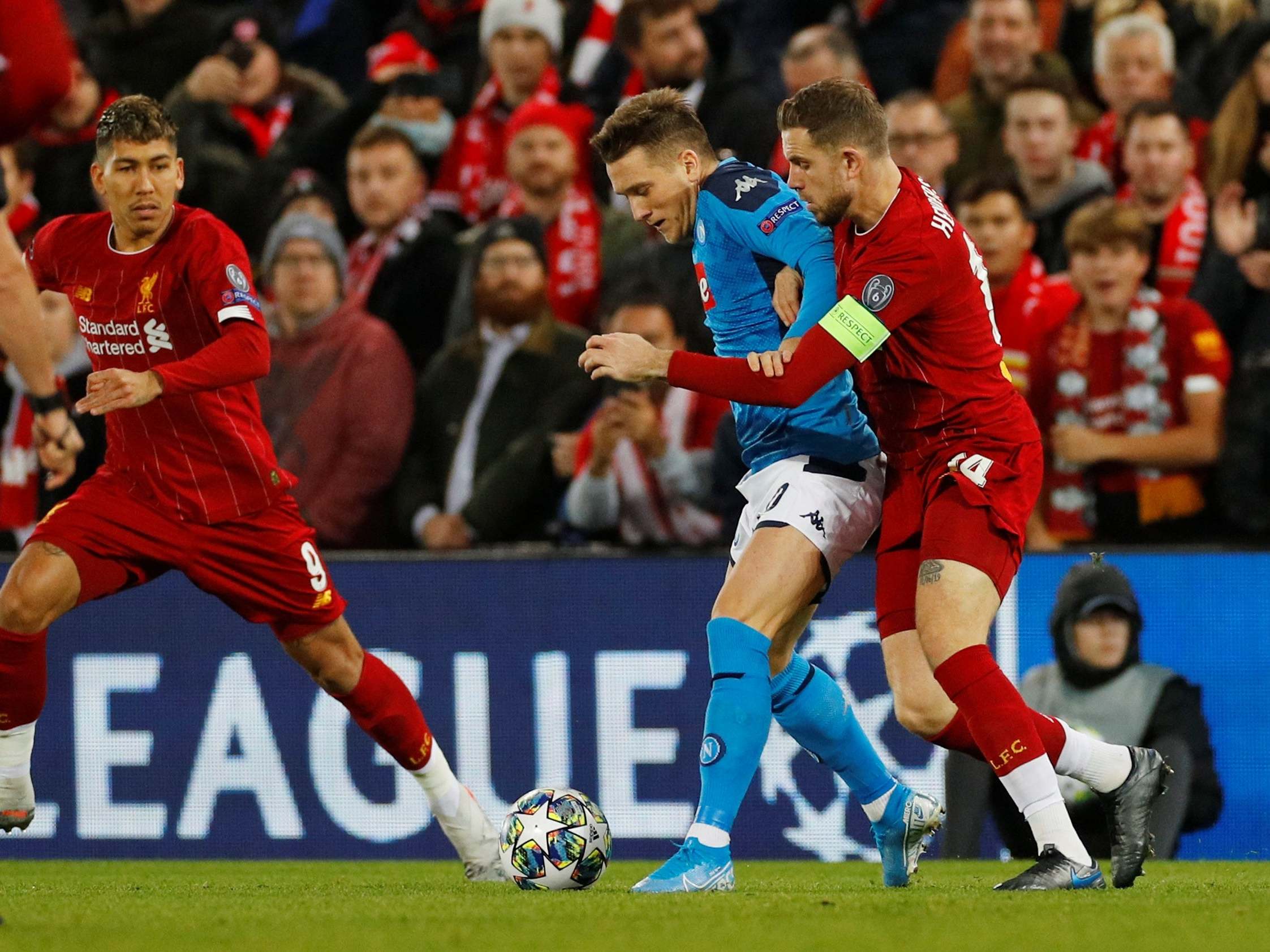 Liverpool welcome Napoli to Anfield knowing they can clinch their place in the knockout stage of the Champions League with a victory tonight.

Napoli are currently second in the group on eight points, one behind Liverpool, and this could well settle which side clinches top spot in Group E.

But with Salzburg third on four points, both sides have to be wary of being caught out in the final round of games. Follow it live after the conclusion of Valencia vs Chelsea:

12 mins: Firmino passes the ball up to Mane who is dispossessed. Napoli have plenty of men back when Liverpool attack, they work the ball to Mario Rui who has a go for goal from the halfway line as Alisson is off his line but the shot goes well wide.

9 mins: Liverpool have tried a couple of different methods to get the ball into the box. A long ball from Fabinho to Mane and then and curling through ball for Salah by Firmino. Both get cut out by Koulibaly.

6 mins: Di Lorenzo takes a heavy fall onto his right shoulder as he tries to win an aerial ball.

He lands off the pitch and is seen to by the physios. By the time Liverpool win the ball back Di Lorenzo has made his way back onto the pitch.

3 mins: Koulibaly takes a chance against Firmino and does for the Liverpool striker, he then passes the ball around the defence as Liverpool press high. Manolas is pressured on the ball and he boots it out of play to ease the danger.

The Reds start the game off and give away a free kick in their own half.


The teams head out onto the pitch at Anfield, Liverpool will qualify for the knockout stages if they win tonight but Napoli have the honour of being the only team to beat the Reds this season.

Can they do it again?


Lots of added time in Chelsea’s draw with Valencia means that kick of at Anfield is less than ten minutes away.

Here’s a reminder of Liverpool’s starting line up as they host Napoli:

90+7 mins: That is it! A great game of football comes to an end. Both teams take a point away from this epic!

Chelsea’s hopes for qualification now rest with a home match against Lille.

90+6 mins: Another miss from Rodrigo! End to end stuff from both teams. Gaya down the left wing opens up Chelsea with a cross into the far post and Rodrigo puts it wide. Valencia’s finishing has been woeful.

90+5 mins: Gaya has a shot and tries to sneak the ball in at the near post. Chelsea look as though they can’t make up their minds what to do with the ball in their possession.

Emerson loses it and Rodrigo is sent away down the righ wing. He brings it into the box and shoots but puts the ball wide.

90+3 mins: No idea where the seven minutes have come from, it’s been more like a maximum of five.

Chelsea do well to control the ball in the first few minutes, the commit a number of bodies forward but Reece James’ cross goes straight to Cillessen.

87 mins: Chelsea have Lille at home in the next fixture whilst Valencia travel to Ajax. A draw will be good enough for the Blues but Valencia want the win. They are throwing men forward in search of a winning goal.

84 mins: Chelsea need to hold on to the result now. Frank Lampard said before the game Chelsea must not lose. Valencia are on top and they’re going for it in these dying stages.

82 mins: GOAL! It’s a misjudgment from Kepa Arrizabalaga as Wass picks up the ball on the right wing. He cross/shoots and Kepa withdraws his arms letting the ball go through. It hits the far post and bounces into the net.

81 mins: Kepa has been shown a yellow card for apparent time wasting. Willian’s night is over as he goes off with Mason Mount coming on for Chelsea.

Parejo has a shot blocked by Azpilicueta who throws his body at the ball.

78 mins: Kante has dropped back into a deeper more defensive role. Frank Lampard finally deciding to hold onto his lead. Lee Kang-In comes on for Soler as Valencia make another change.

75 mins: Chelsea persistent hunt for goals may end up hurting them in the end as Valencia continue to send balls into the box. A corner is whipped in by Parejo and headed back across goal where Kepa grabs hold of the ball to end the attack.

72 mins: Frustration for Valencia as the ball comes into the box for Rodrigo. He makes his run but so does Kepa who comes out of his goal and catches the ball.

Kante is booked for a tackle on Gaya despite winning the ball.

69 mins: Chance! Big chance for Chelsea. Batshuayi makes a run in behind the defence as the ball is played up to him. He runs it into the box and squares the ball to Willian who shoots but hits Cillessen.

A belated offside flag is raised against Batshuayi.

The match is on Wednesday 27 November.

The match gets underway at 8:00pm.

The match will be available to watch and stream on BT Sport 2 and the BT Sport App.

Liverpool have been relentless this season and, despite being forced into a pattern of grinding out late wins, the possibility of ensuring their qualification – and securing a much-needed rest for some of their senior players in their final game against Salzburg – coupled by the fiery fortress atmosphere at Anfield will haul Klopp’s side through a tricky encounter.