LITTLE Mix’s Leigh-Anne Pinnock ditched her knickers for a VERY risky dress in a sexy Instagram snap this evening.

The 29-year-old beauty even shocked her bandmates with the jaw-dropping get up, which also drew attention to her toned abs.

In the snap, the stunning star is pouting at the camera in glam make-up and the attention-grabbing outfit.

The dress has a halterneck and just one sleeve, with Leigh-Anne’s other arm left bare.

The opposite leg is also exposed with just a tiny thread of fabric preserving her modesty on her left side.

Cut-out detailing exposes her enviable stomach, and Leigh-Anne has one hand holding onto the outfit strip dividing her torso from her legs – drawing attention to her lack of underwear.

Perrie Edwards was among her followers who shared their admiration, gushing over her bandmate in the comments.

Alongside a heart-eye emoji, Perrie wrote: “Jesus Christ!” – a sentiment that was echoed by many of the band’s fans.

One agreed: “THE HAIR. THE OUTFIT. THE FACE. THE FIGURE. HER.”

Another wrote: “LOOK AT YOU OMG!”

A third exclaimed: “How does it feel to be god’s favourite??”

Leigh-Anne is currently being kept busy with Little Mix’s BBC talent show The Search, which is hoping to find the UK’s next big band.

On Saturday, the girls were forced to perform as a trio after Jade Thirlwall had to miss the show due to self-isolation guidelines.

The group’s sixth studio album Confetti will be released next week. 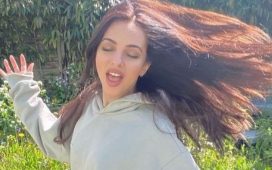 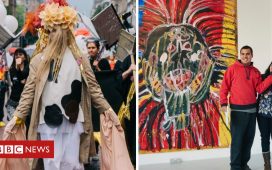 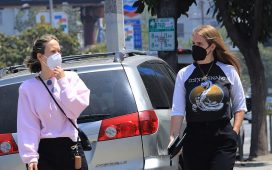 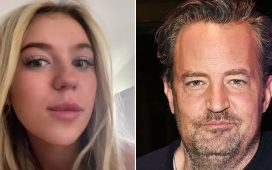