LITTLE MIX may be keeping tight-lipped about their impending hiatus, but the wheels are very much in motion for the girls to all become major stars in their own rights.

And I can exclusively reveal Jade Thirlwall is the latest of the trio to start making moves on her own, after signing to the same management company as superstars Harry Styles and Mark Ronson.

An insider said: “Jade had a series of meetings with Full Stop Management earlier this year and she’s now signed on the dotted line.

“They think she is going to be a huge star, just like Harry has become after One Direction went on hiatus.

“Jade has bags of ideas for her solo music and she’s already recorded some amazing songs that have impressed industry bosses.

“As well as music she is putting plans into motion for more TV appearances and there is no doubt she can become a mega-star in her own right.

Jade is still incredibly close with her Little Mix bandmates Leigh-Anne Pinnock and Perrie Edwards and they’re all supporting each other’s’ moves behind the scenes.

“It’s going to be a really exciting time for all three of them.”

In March I revealed how Leigh-Anne had been snapped up by Tap Music Management – the team who have masterminded the careers of Dua Lipa and Ellie Goulding.

Alongside her new Christmas film, Boxing Day, Leigh-Anne has also landed a major presenting role as the host of the Mobo Awards.

She will join Munya Chawawa at the Coventry Building Society Arena on December 5.

Little Mix will embark on their twice-delayed Confetti Tour next April before going their separate ways later in 2022.

Their former bandmate Jesy Nelson is set to release her debut solo album around the same time.

After a rocky start following the release of Boyz, Jesy will kick-start next year with a band new single.

A source added: “Mid to late January has been pencilled in for Jesy’s next single.

It’s safe to say so far things haven’t gone to plan but it’s hoped the New Year will bring in a new era for Jesy.

“The album is half done already and talks are ongoing about her performing at the Brit Awards in February.”

GRAMMYS chiefs defended themselves after they were criticised for handing Marilyn Manson two ­nominations at next year’s ­ceremony after he was accused of sexual misconduct.

CEO Harvey Mason Jr said: “We won’t restrict the people who can submit their material.

AFTER more than a year of having their globe-hopping antics restricted by Covid travel bans, a wave of stars are finally crossing the Pond to America now that the rules have been relaxed.

Piers Morgan was one of the first to ditch the UK for the States – making use of British Airways’ frequent flights from London to New York.

Meanwhile, the switch meant that after months apart. Harry Styles’ mum Anne jetted Stateside to join him on his Love On Tour US trek.

She was seen dancing with his girlfriend Olivia Wilde’s children during his show in San Diego.

JIM: ED NEEDED ME ON VOCALS

The comedian spoke for the first time about performing on the track, alongside Australia pop princess Kylie Minogue.

Ed previously said Jimmy had put his voice on the song back in September but Jimmy has never confirmed it until now.

“I have an odd musical life. It’s me and Kylie Minogue.

“Johnny McDaid, who used to be in Snow Patrol and writes with Ed, is one of my best friends.

“He played me the song about eight months ago, I was just in a puddle, I was like, ‘Ah man, that’s so beautiful.’

“I find music is a real way to connect with grief, I like what music does. It reminds you of the people you love. It’s such a beautiful song.

“And he went, ‘Oh you have to do backing vocals for it.’ I said, ‘I don’t think that’s a good idea,’ but he said he could make it work.

“So I did the backing vocals. I can hear myself on it.”

Laughing, he added: “They needed it– that song is nothing without me!”

SHE is one of the world’s biggest stars but to her son, Adele is just “Mum”.

The singer has revealed in a new interview how nine-year-old Angelo hid under a blanket and played on his phone while she debuted her new album 30 to pals.

Adele said: “I got quite emotional during it. Angelo was there at the listening party and he put a blanket over his head, playing a game on his iPhone. He’s only nine, bless him!”

She hit back at claims her ex-husband Simon Konecki had got his hands on her fortune, which is estimated to be around £130million.

Adele added: “There’s been all sorts of rumours about why we broke up, that he got all my money.

“As if I’d ever be that stupid to let someone have all my money – not that he ever bleedin’ asked for it.”

MOST stars enjoy a swig of posh champagne but Gemma Chan wore her bottle as a bag when she hosted the VIP Swarovski party at Annabel’s members’ club.

The Skins actress showed off her £4,650 Big Bubbles Clutch from designer Judith ­Leiber at the bash in London.

Gemma co-ordinated the pricey accessory with a dramatic green gown that was cut to the thigh with a long train down one side.

As well as hosting A-list stars at the event in Berkeley Square, Mayfair, Gemma was also able to let her hair down on the night – partying with models including Nadine Leopold.

His American wife Ayda Field revealed the family and their four children will start celebrating tomorrow after Thanksgiving today.

She said: “Rob’s looking forward to Christmas, and now that he’s got a Christmas album – the one he made two years ago, I get to listen to that.

“I said to kids, once we get Thanksgiving over we’ll start watching Christmas movies and listening to Christmas music and we’ll be in full Christmas mode.

“Come Friday I’m in Christmas mode. I am Christmas.”

NICKI MINAJ crossed off a promise to Kim Kardashian by ­promoting her new underwear line.

The Super Bass singer posed in a Skims x Fendi set from Kim’s collaboration with the Italian fashion house.

Nicki wore the bra and pants with an autumnal patchwork coat and knee-high boots for the shoot.

She shared the pictures with her 163million Instagram followers.

Kim and Nicki have been pals for years, with the ­latter gifting Kim’s daughter North a diamond-encrusted Barbie necklace when she was born in 2013. 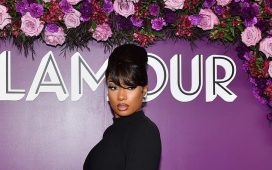 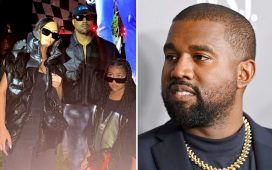 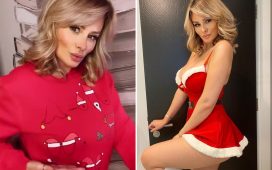