The Aviator has a relaxed demeanor that’s reminiscent of the previous-generation Range Rover. Performance is acceptably brisk, although some way short of the sports car acceleration that has become common to the segment, and it’s immediately obvious that Lincoln has prioritized comfort over dynamic precision. The engine has plenty of low-down muscle and is happiest when asked to deliver near-silent cruising. Yet it’s also enthusiastic when poked from its slumbers, revving keenly and sounding pretty good for a V6 when working hard.

Like most of Ford’s bigger offerings, the Aviator comes with the 10-speed auto ‘box that was jointly developed with General Motors. It works extremely well under gentle use, blending changes almost imperceptibly, but requests for harder acceleration are often met by a noticeable pause as it tries to work out how many of its many ratios to shed. Lincoln doesn’t use conventional gearshifters, rather buttons on the dashboard, but it’s possible to manually select gears through paddles behind the steering wheel.

The entry-level Aviator rides on steel springs and has passive dampers, but four-wheel-drive versions are upgraded to active shock absorbers. Our test car was also fitted with the Dynamic Handling Package, which brings height-adjustable air suspension and a road-scanning camera system to help the dampers prepare for surface changes.

This seems good at dealing with individual bumps, but soft springing and the lack of any active anti-roll system also mean lots of roll under enthusiastic cornering, plus pitch and dive under acceleration and braking respectively. It doesn’t feel wallowy; the chassis is adept at rolling with the punches, but it just seems to take a lot of them. Grip levels are modest, and although the Aviator will travel at a reasonable lick, it’s definitely happier making stately progress.

The interior is spacious and, for the most part, well-finished, although its design feels more old-fashioned than is normal in this part of the market. Heating and ventilation is still controlled by metal-milled knobs and piano black buttons, while the 10.1in touchscreen is modest for the segment, even if its interface is simple and easy to use.

More senior Aviators come with Lincoln’s 30-way adjustable ‘Perfect Position’ seats, which even have the option to vary the height of each side of the base cushion; there’s so much choice that we didn’t have long enough in the car to find an optimum setup, although it’s no doubt there somewhere. Most materials feel appropriately classy, but there are still hard plastics, including the bases of the second-row seats. Space is good back there, but the third row is only really suited for part-time use, being cramped and having much less padding than the other chairs. 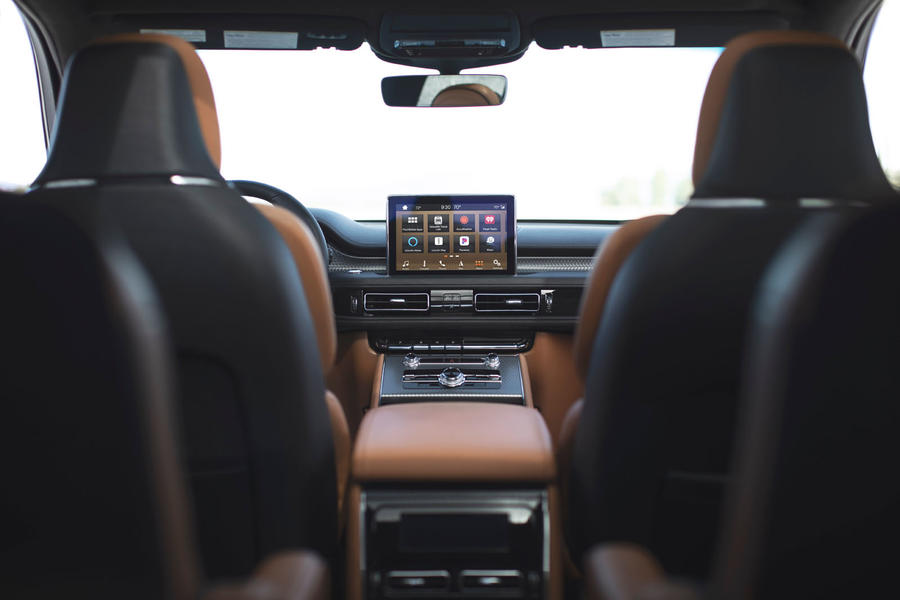