Taken actor Liam Neeson could’ve been James Bond, if his late wife Natasha Richardson didn’t have a say in it.

“I know they were looking at various actors and I apparently was among them,” Liam revealed on The Late Late Show with James Corden on Thursday, June 23. “However, my dear, departed wife did say to me…’Darling, if you’re offered James Bond and you’re going to play it, you’re not going to marry me.'”

Liam and Natasha first met in 1993 when they co-starred on Broadway’s Anna Christie. Both actors were nominated for the Best Actor and Best Actress Tony Awards for their work. The duo ended up getting married one year later, and had two children together: Micheál, 26, and Daniel, 24.

Natasha tragically died in 2009 after a skiing accident, and Micheál has had a difficult time with his grief.

“I think the pain was a little too overwhelming,” he told Vanity Fair in July 2020.”I think the mind is very powerful, and subconsciously, or unconsciously, it can protect you. That’s what it did when she passed. I just pushed it aside and didn’t want to deal with it.” 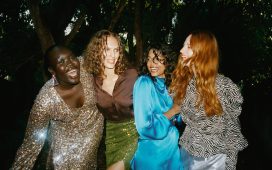