Liam Gallagher wasn’t waiting around for anyone else to wish him a happy birthday as the former Oasis star called himself a ‘cool c***’ in a bizarre tweet.

Whatever floats your boat.

Fans have been quick to wish the star, who recently released his second studio album, a happy birthday, with one telling him: ‘Happy birthday legend.’

‘You’ve helped me through so much man, have a f***ing mad one x,’ another added with one more fan urging him to: ‘Have a biblical birthday king.’

The Shockwave singer seems to have had a pretty decent start to his celebrations, after he spotted himself on a billboard in Picadilly Circus as he promoted his new album Why Me Why Not.

‘Piccadilly Circus London never looked so good Why Me Why Not LG x,’ he wrote on Twitter, after heading for an impromptu signing in HMV White City.

The outspoken singer recently took to The Jonathan Ross Show for a candid interview, admitting Oasis shouldn’t have split.

He and his brother Noel have been at each other’s throats in a public feud since the split in 2009.

‘I don’t know why we split up, I’d like to know. Maybe I might have been a bit too rock ‘n’ roll for him,’ Liam reflected.

‘I might have cancelled a few gigs, I’ve might have stayed up later than I should have some nights. We’re not S f***ing Club 7.

‘Maybe he wanted to go solo and do his thing and be on his own and take all the fun out… I don’t know what I’ve done really to be fair. We’ll get to the bottom of it one day.’

MORE: Liam Gallagher admits to regularly shouting at Jamie Oliver on his way home from pub

MORE: Liam Gallagher believes he was ‘too rock and roll’ for Noel and admits Oasis shouldn’t have split

READ  NTAs 2020 RECAP: Who won and what happened at last night’s awards? 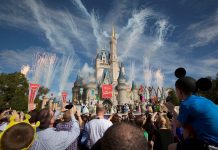