Leeno and Poncha the cats are brothers, and although they actually look pretty different, they have one big similarity – they both have feline asthma.

And just like humans, they need inhalers to treat it.

Together they raise awareness of the condition on their Instagram page, and they have already gained lots of fans, with more than 22,000 people following their account.

Speaking to Metro.co.uk for Cat Week, owner Katja Krause explains: ‘I had my own account for a while and was mostly posting travel or wedding pics as we’re wedding and real estate photographers but I was sure if those cuties moved in with us, it will be spammed with cat pics.

‘I thought I should set up a cat account just for them. I had no idea how big the cats of Instagram community was but I’m so lucky we did it because all these cat people are just great.

‘We use it to raise awareness for feline asthma. We try to educate people about it and tell them what they need to look for in their cats and how it’s diagnosed and treated.

‘Some people went to the vet for asthma check ups and others ordered an inhaler instead of giving pills after talking to me. It’s great to be able to help more kitties.’

When Katja and her boyfriend Tobi, from Berlin, Germany, adopted them in October 2017 at 12 weeks old, they had no idea about their health problems – but they say it wouldn’t have made a difference.

‘We would have taken them anyway but we didn’t know they had asthma until they started to breathe heavily while playing and running around very quickly after moving in. Soon after, the first asthma attacks showed up.

‘First we thought they’re trying to throw up hairballs or something but it started to happen too often for this and it also sounded different. Much rougher and dry. I started to read a lot and soon got an idea about feline asthma.’

The condition is fairly common, affecting 1% of all adult cats worldwide, but as with humans, it can be much more severe in some cats.

What are the symptoms of feline asthma?

Diagnosis took a long time as it relies on ruling out other conditions.

Katja says: ‘The most exhausting (and also expensive) thing in the beginning was finding a diagnosis.

‘You have to do x-rays first, then an ultrasound of the heart (with echo), then a bronchoscopy with lavage (BAL) with narcosis to filter some liquids out of the bronchia that will be sent to a laboratory. If this doesn’t show any other signs for infections, it’s feline asthma.

‘We did additional allergy tests as well to see if it’s allergy asthma or bronchial. They’re neither allergic to pollen, dust or any food. So it’s bronchial asthma (where the airways are inflamed) for both of the twins.’

The condition is lifelong and involves check ups and lots of medication.

‘It is what it is and they can’t help themselves so we need to do it. We love doing it to help them having a happy life. Giving them away was never an option.’

The twins use an inhaler twice a day, with medication to widen their bronchia and an anti-inflammatory with cortisone.

Taken through a tablet, cortisone can cause damage to other organs so inhaling it means it only goes to their lungs.

They use the Aerokat, a device made especially for cats, with a mask to help give them the inhaler.

‘Luckily they knew clicker training already (we are teaching them tricks) so it was quite easy to get them used to the Aerokat,’ Katja says.

Although Katja and Tobi want to give the twins the best treatment possible, making sure they get everything they need is expensive.

‘We need the daily treatments and x-rays of both every 6 months and sometimes also check ups via ultrasound.

‘If this wouldn’t be enough they have a very weak immune system. This means we’ve already had giardia, diarrhea, worms, stomach and bladder infections, gastritis, an eye infection and Leeno got stung by a bee, all in their first year.

‘We spent about €5000 (£4,473) on vet bills within their first year with us and this surely is a lot of money but we would have rather lived under a bridge than find them another home.’

Katja and Tobi want to do everything they can to help Poncha and Leeno as they know that if they can’t afford treatment and they have to give the cats to a shelter, they are unlikely to find another home because of their health conditions.

They are trying to raise money through a GoFundMe page to help with their ongoing treatment, as every month their medication alone costs €60 (£53.68) and the checkups across the year cost around €500 (£447.30).

In honour of Catfest, we will be partnering with the festival to bring you seven days of the funniest, cutest, coolest and most amazing cat content.

Until Saturday 29 June, read stories about all things cats, including kittens abandoned on rubbish dumps to fantastic cat art, and everything in-between.

Catfest will include cat-themed literature and film plus live music, poetry and crafts. There will be rescue kittens, talks from cat experts, Instagram cats and an auction as well as cocktails, cake and much more. Tickets have sold out, but you can still get involved on social media.

Part of the proceeds from the event will benefit Erham Rescue and International Trash Cat & Dumpster Dogs to help cats and kittens as well as street animals in need.

Are you the owner of a fantastic cat? Then tweet us your cutest kitty pics @MetroUK and @MetroUK_Life for a chance to be featured!

MORE: 16 stunning black cats who are looking for their forever homes

MORE: Jeffree the cat helped young boy with Asperger’s cope with the sudden death of his father

MORE: Animal charity offers students the chance to hang out with cats while they revise for exams 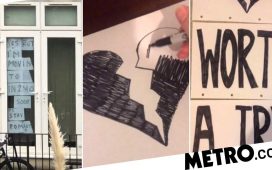