By Azu Ishiekwene
Hundreds, if not thousands, of lawyers who converged on Abuja on Sunday for this year’s Bar conference may find themselves discussing something other than transition, transformation and sustainable institutions, which the Nigerian Bar Association (NBA) had previously advertised.

In his opening address to the association, President Muhammadu Buhari said something that has left the Bar – and the Bench – chasing their tails. He told them that the rule of law must be subject to the supremacy of the nation’s security and national interest.

In plain language, the rule of law takes second place when national security or interest is at stake. Alluding to the Supreme Court’s decision in  Mujahid Asari Dokubo vs The Federal Government of Nigeria (2007),  without citing the specific case law, Buhari said he was pleased that this position had been adopted and settled by the court.

That is doubtful. The points at issue in the Dokubo case were bail which, no matter the gravity of the offence, is discretionary, and personal liberty, which is only a part of the rule of law. Dokubo had vowed to start a war against Nigeria and it was the opinion of the court that granting him bail would substantially increase the risk of carrying out his threat.

In the case of Nnamdi Kanu, however, even though the IPOB leader made a similar threat, the court granted him bail on health grounds.

But Buhari was not fishing in that pond on Sunday: he was mainly alluding to the cases of the Shiite leader, Ibrahim Elzakzaky and former National Security Adviser, Sambo Dasuki. In spite of multiple court orders, Buhari’s government has refused to release both men, who have been detained for years, on the excuse that they remain threats to national security.

Yet, whatever their crimes may be, the public is not aware that either Elzakzaky or Dasuki is sworn to the overthrow of the government. So, what was the point in cherry-picking the Dokubo case?

As Buhari approached the podium on Sunday, he probably sensed how ridiculous it was that his government that has repeatedly disobeyed court orders would conveniently cite a court judgment to justify its disobedience. He had also said on his return from his recent holiday in London, that he would jail corrupt people, stoking criticisms that he would use extra-legal means to crush his political opponents.

He opened his speech by attacking first, as a form of defence. When Buhari said the rule of law was inferior to national security, the hall fluttered not in displeasing murmurs or fleeting exchange of curious glances; it erupted, instead, in a storm of applause for the president.

From that point on, those who may have nursed the thought of pressing allegations that the administration’s war on corruption was “selective”, asking questions about the multiple violations of court orders, or flagging the charges of human rights abuses and violations of press freedom, were on the back foot.

But keep in mind that this was not a meeting convened for fresh spies by fallen State Security Service chief, Lawal Daura, to justify the siege to the National Assembly, or a basic class for recruits on national interest and criminal sedition by Inspector General of Police, Ibrahim Idris, where you might expect nothing but total submission.

It was a conference of the Bar association where you expect to see firebrands burning with near fanatical zeal to protect the rule of law (of which civil liberties are an essential part), without which any talk of national security does not make sense.

Buhari had not even landed the punchline on the superiority of “national security” to “the rule of law” before the lawyers rolled over, wilfully forgetting – or suppressing – what happened just outside the door, before the conference was called to order.

About three weeks before the Bar conference, former DSS DG, Daura, laid a siege to the National Assembly deploying armed and hooded security men. One version of the story said Daura claimed he ordered the invasion “in the national interest”, because he believed that “national security” was under threat.

Apparently, the new Bar President, Paul Usoro (SAN), and the new executive members of the Association, were either too busy campaigning for election or were on a tour of Mars during the DSS siege.

Before the Bar conference started on Sunday, IGP Idris had also given us his own definition of “national security” and “national interest”. The graduate of agriculture and law said leaking his memo to acting President Yemi Osinbajo on the siege to the National Assembly was “a threat to national security”.

So, he pounced on PREMIUM TIMES, roughened up key editorial staff, dragged reporter Samuel Ogundipe into detention and froze his account. Why? A dated colonial law, called criminal sedition, says publication of the truth, convenient or not, is a threat to “national security.”

The courts, which Buhari conveniently quoted to support his position on the “supremacy of national interest” over “the rule of law”, have repeatedly ruled that Elzakzaky and Dasuki should be released on bail, yet the rulings have fallen on deaf ears.

In spite of Buhari’s best effort to adjust to his civilian dress, his martial instinct has barely changed. From time to time, the Buhari who promulgated Decrees 2 and 4, 34 years ago under a military government where he was accuser, judge and jailer, rears his head – just like it happened on Sunday.

But that’s precisely why some of the brightest lawyers were there – to remind Buhari that it is not in his place – or in the place of any other arm of government, other than the courts – to decide what may or may not constitute a “threat to national security.”

The  president came to office by the rule of law and, however inconvenient, he must stick with it or overthrow it and take us back 34 years when he could rule as he pleased.

In his piece entitled, “Rule of law: The president got it wrong”, Reuben Abati was spot on when he said, “In summary, the rule of law is about fairness, justice, equality, due process, accountability, impartial application of the law and proper administration of justice.”

Governments, especially the executive arm, tend to forget that it is the rule of law that makes it possible, in the first place, to define what national security is. They think national security is what the man or woman in power says it is – and quite often, meaning personal loyalty, convenience and security.

At a time, threat to national security was as ridiculous as the biblical Joseph refusing to sleep with Pharoah’s wife, Potiphar; as silly as which of the Isabellas married first in ancient Spain; or as puzzling as Galileo’s disagreement with the Inquisitors over the shape of the earth.

It was the whim of the ruler, who was not just outside the rule of law, but was also a law unto himself. We were there 34 years ago – and for 28 years of the country’s history – when the powers of the court were emasculated by decrees and a cabal ruled as it pleased.

But surely, that’s not where we are now. It’s a shame that the Bar conference is ending without anyone present in the hall on Sunday reminding the President that we’ve come too far to go back to the state of nature. 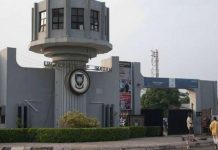