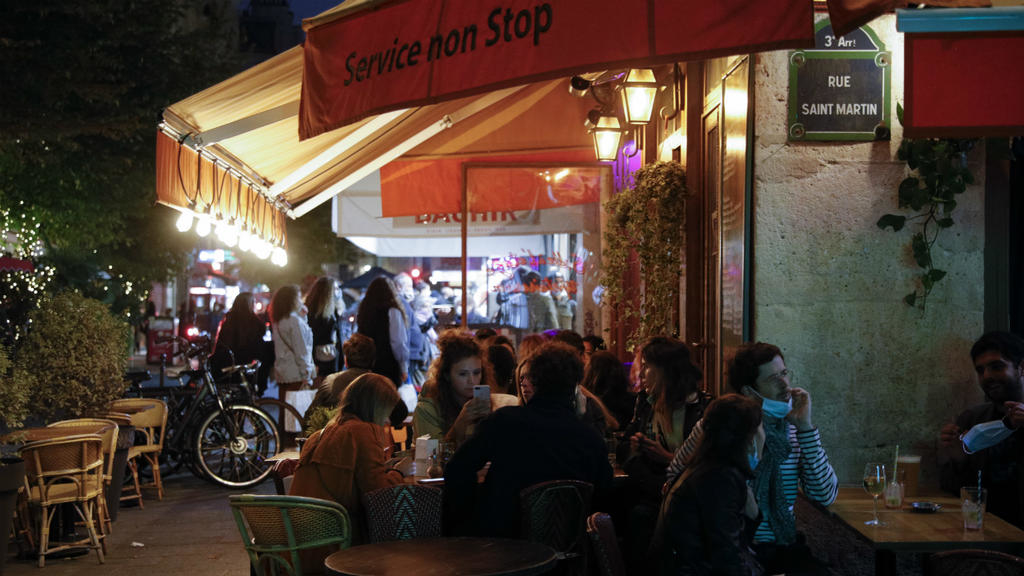 With the coronavirus’s second wave crashing down on France, nightlife in the capital is set to ebb: Starting Monday night, bars in Paris will be forced to close at 10pm. Some have vowed to fight the measure while others are resigned, saying the government compensation on offer is not enough to ensure businesses can hold on long enough to reopen for good once the coast is clear.

The move to shut down late-night revelry in establishments in Paris and 10 other French cities comes a day after bars and restaurants in Marseille and Aix-en-Provence were forced to shutter completely for at least two weeks. The latter cities are classified as a Covid-19 “maximum alert zone”. But Paris, currently considered a “reinforced alert zone” has seen its Covid-19 figures continue to climb since the measure was announced.

On average over the past week, Paris has seen an incidence rate of 243.8 confirmed coronavirus cases per 100,000 inhabitants – or nearly five times the alert threshold set when the country came out of lockdown in May, according to the Santé Publique France health authority. That figure more than doubles for Parisians ages 20 to 29, at 494.5 per 100,000. (One of the factors that qualified Marseille as a maximum alert zone was its incidence rate above 250 per 100,000.)

When Health Minister Olivier Véran announced the new restrictions last week, the industry didn’t mince its words. Major industry union UMIH released a statement demanding “the immediate withdrawal of these decisions”, adding: “The professional bodies will defend the sector’s interests in the courts if necessary”. If new measures to support the businesses affected aren’t up to the job, “we will cease all work with the government until further notice”, the organisation threatened.

Other industry representatives have insisted the measures are unfair, given the effort the hospitality sector had put into keeping customers safe. The CPME Île-de-France union, representing small and medium-sized business in the greater Paris area, and the Regional Association of Food Industries, noted Sunday that the sector’s professionals “were often the first to adopt, respect and enforce coronavirus prevention measures [e.g., face masks and social distancing] and healthcare precautions, no matter the cost for their businesses”.

In Paris, the police prefecture made clear that the 10pm closures would not apply to establishments that by law can only serve alcohol with food. It also said it would forbid alcohol sales, drinking on public property and blasting music outdoors between 10pm and 6am to prevent parties from moving out of the bars and into the streets after closing time, with public gatherings of more than 10 people also banned. The measures that come into effect Monday in Paris run through October 11 – for now. But many in the hospitality industry believe the early bar closures are only the beginning, particularly as Covid-19 figures inch up in the capital.

On Sunday, the “Restons Ouverts” (Let’s Stay Open) collective rallied several dozen bar, restaurant and discothèque owners in face masks on the Esplanade des Invalides in Paris to vent their frustration over their plight.

Stéphane Manigold is a spokesman for “Restons Ouverts and also runs four fine-dining restaurants in Paris, including the Maison Rostang. The name Let’s Stay Open “isn’t a call to insurrection”, Manigold told FRANCE 24 on Monday. “If the prefect tomorrow decides to close us down, obviously we will close,” he explained. “Stay open, that’s what we want to do. But not for a month or a week. If we have to close for a month, two months, three months, we will. We’ve already done it. We’re not irresponsible people.”

For Restons Ouverts, the issue is the longer game for businesses in real financial trouble after an initial three-month lockdown starting in March and a bleak summer season. It’s about getting establishments the aid they need to survive the current crisis and be in shape to reopen when they can.

“We’re in a situation that’s no longer bearable economically because the government hasn’t taken strong measures [to support us],” the businessman says. During the spring lockdown, the state allowed the hospitality sector to delay payment of certain expenses, but they still had to absorb fixed costs. They provided guaranteed loans, but those loans will be debt on the books for years to come. “A second closure with cash flow at its lowest, turnover across the industry at minus 40 to minus 60 percent, is not acceptable,” Manigold said.

“It means we are already down on one knee and we will be down on both … if the government doesn’t take strong measures to at least absorb our fixed costs,” he said.

Manigold’s own restaurants in Paris’s 8th, 16th and 17th arrondissements (districts) are not directly affected by Monday’s new restrictions, but he suggests they could have knock-on effects on full-service restaurants regardless. “There are clients who wrote us to say, ‘Listen, we reserved for 9 pm but we want to push it back to 7:30 since you have to close at 10 pm and we won’t have time to enjoy our meal’,” he says. “There is real confusion.”

In any case, Manigold is convinced that another full lockdown is only a matter of time. “Let’s be clear, in Paris the decision has already been made in Île-de-France (the greater Paris area) to close all the establishments. It’s only a matter of days or weeks,” he said, calling it “utopian” to imagine otherwise.

But the restaurateur questions the wisdom of targeting an industry that has invested so heavily in preventative measures to stem the spread of the virus. Manigold said anyone could understand a general lockdown, but he questions how a crowded Paris metro is safer than the establishments he represents.

“The French are being told that the virus only circulates in restaurants and bars,” he quips, noting the latter have stocked up on hand gel and face masks for which French social security only reimbursed them until the end of July.

The businessman suggests the authorities would do better to isolate populations particularly vulnerable to the virus or to punish bars that repeatedly don’t follow the rules – not the whole sector in one fell swoop.

“People will continue to get together in private locations anyway. But there won’t be rules, there won’t be people like us reminding them to socially distance, to wear a mask systematically when they walk around. When you’re with your family, you don’t wear a mask to make your way to the toilet,” Manigold said. “We’ll give ourselves a clear conscience, but we’ll be ineffective.”

Worry on the dance floor

Meanwhile, other segments of the nightlife business still haven’t enjoyed the chance to reopen since shuttering in March.

Discothèques have remained closed throughout France’s coronavirus crisis. But the head of the country’s top discothèque union says he spent the summer alerting authorities to no effect over bars, restaurants and other establishments, particularly in Paris, that broke anti-virus protocols to fill the gap discos left in the nightlife market.

“To be a discothèque in France over the past four months, it was simple, there was only one condition to fill: Don’t be a discothèque,” Patrick Malvaës, president of the National Union of Discothèques and Leisure Places (SNDLL), wryly told FRANCE 24. That laissez faire attitude, he believes, contributed to the second wave, putting public health at risk and penalising the real discothèques by further delaying their reopening.

The union chief said he had no illusions over the summer that discos would reopen anytime soon. “Social distancing, masks, etcetera, are incompatible with our profession. A discothèque can’t be a masked ball, it’s not possible – and neither is distancing because it’s dance, it’s encounters. Coronavirus takes aim at the very heart of our profession,” he said, adding that it would be hard to police those sorts of rules on the dance floor anyway.

“The public authorities let [the misconduct over the summer] happen, they didn’t take responsibility – and now they want to be pure as the driven snow, so they’re whacking at everyone blindly,” Malvaës said.

“It isn’t the bars that misbehaved [that now have to close], it isn’t the ones that raked it in all summer, filling the gap left by the discothèques. [The authorities] let them occupy the discothèques’ terrain and now they make the whole profession pay the price. That’s what shocks me,” he said.

At this point, Malvaës said, “reopening isn’t the solution” as far as discothèques are concerned. “There is a real public health issue. It can’t be denied. We recognise it.” In fact, the union leader doesn’t see discothèques reopening before next April, after a full-year hiatus, and only hopes the state aid they have received so far will be extended until then.

“If [the government] had been coherent in its policy – closed the discos, given them aid but stymied misconduct elsewhere – if it had been coherent and consistent, the message would have come across better,” he lamented.