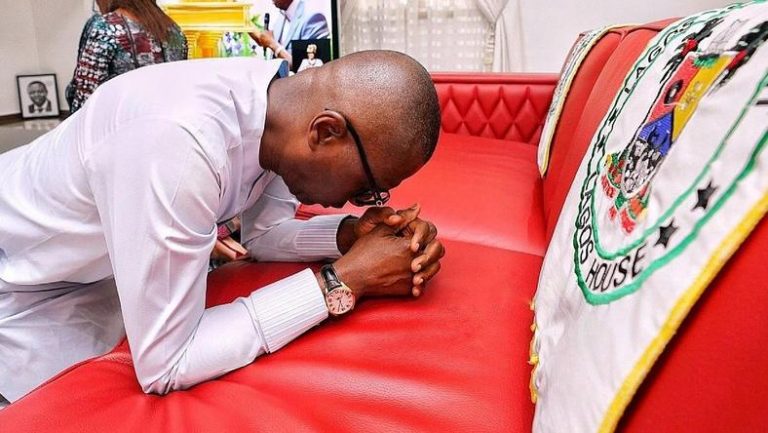 The APC Publicity Secretary in Lagos, Seye Oladejo, said this while reacting to calls by the opposition Peoples Democratic Party (PDP) to Sanwo-Olu to consider resignation in view of what PDP called “the collapse of good governance in the state, particularly in the last 10 days”.

Oladejo said the PDP call is an invitation to anarchy, saying “the call for resignation remains the wish of a frustrated opposition battling its permanent implosion”.

According to him, the dream of PDP to govern Lagos state through the back door after persistent rejection at the polls remains a nightmare.

Oladejo said that the fact that the wanton destruction of public properties, utilities and individual investment in Lagos in the aftermath of #EndSARS protest had thrown the PDP camp into unprecedented jubilation was loaded with meaning.

“The PDP in Lagos state that suddenly came to life in the past week owes the innocent members of the public detailed explanation about its ignominious and condemnable role in the mayhem.

“The intermittent falsehood about governance in the state fed to the unsuspecting public fanned the ember of the unprecedented violence which has left in its wake sorrow, tears and blood.

“The daylight murder of police officers and the razing of several stations across the state has no doubt taken its toll on our security architecture, but the state government is working assiduously to provide temporary accommodation to forestall the breakdown of law and order. We are persuaded by the firm assurance of the governor to revamp our losses in no time,” he said.

According to Oladejo, the flag-off ceremony of the reconstruction of the Eleko to Epe T- junction road is an eloquent testimony that governance is not on recess in the state.

He added that the security of lives and property and all-round development remain the priority of the Lagos State government.

Oladejo said that the unfortunate event of the past two weeks which took off as a peaceful nationwide protest and snowballed to the breakdown of law and order remained regrettable and distasteful and should not be used to play politics.

Calling on the governor to resign, the PDP said in a statement on Sunday, by its Publicity Secretary, Taofik Gani, that the governor seemed to have been overwhelmed by the current challenges facing the state.

The PDP spokesman said: “This counseling is in good faith and for the overall interest of the state.

“If this state continues to experience the collapses in next 72 hours, it may suffer a declaration of state of emergency, a step that would likely deprive all.

“The PDP is even more expedient for the governor to welcome the counsel to step aside now that the Nigerian Army has revealed him as the person who invited the soldiers to go and quell the Lekki protests.”

“Obviously, Lagosians can no longer trust a governor who denies his conspiracy actions in government.”

According to him, Sanwo-Olu has no moral standing worth being proud of and he should admit this and honourably leave the stage as governor of the state.

READ  Ruga is private business and so what?